The Heaven and Hell of Architecture in Thailand Posted by sasha on Oct 9, 2014 in Uncategorized

As we mentioned briefly in the introduction to Chiang Rai, there are plenty of interesting things to see outside of the city. A highlight of any visit to Chiang Rai is definitely experiencing the contrasting visions of two national Thai artists at the White Temple and Black House – dubbed the “heaven and hell of architecture.” One seems like something out of a dream, while the other more closely resembles your nightmares. One is white and shiny, while the other is black and grim. Unlike anything you’ve ever seen, these two ongoing projects make for a fascinating day-trip in Chiang Rai. Let’s take a closer look at each. 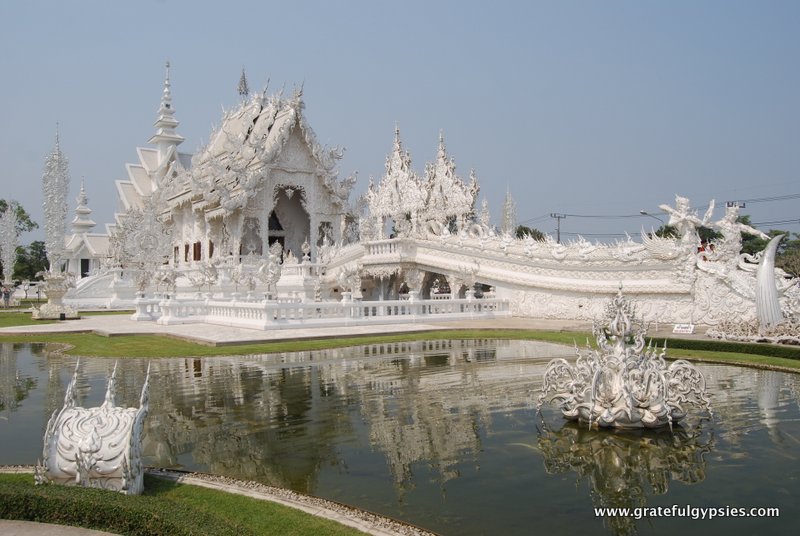 While you may be “templed out” from your travels in Thailand or other SE Asian countries, make sure you don’t skip out on Wat Rong Khun (วัดร่องขุ่น) – brainchild of famous Thai artist Chalermchai Kositpipat (เฉลิมชัย โฆษิตพิพัฒน์). This unconventional Buddhist/Hindu temple has to be seen to be believed, and you’d be forgiven for wondering whether or not it was dropped from the heavens. As for the choice of color, white stands for Lord Buddha’s purity, while white glass and the reflection it gives off stands for Lord Buddha’s wisdom that “shines brightly all over the Earth and the Universe.” 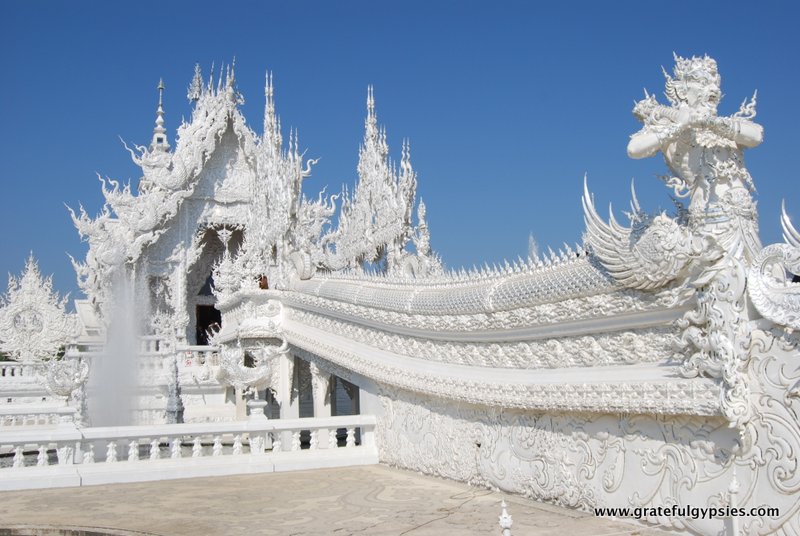 When your eyes adjust to the sheer brightness of the temple and you get over your initial sense of awe, take a few minutes to look a bit closer at the surroundings. You’ll find some creepy skulls hanging from the tree, evil looking shrines to booze and tobacco, and even a few alien creatures coming out of the water. 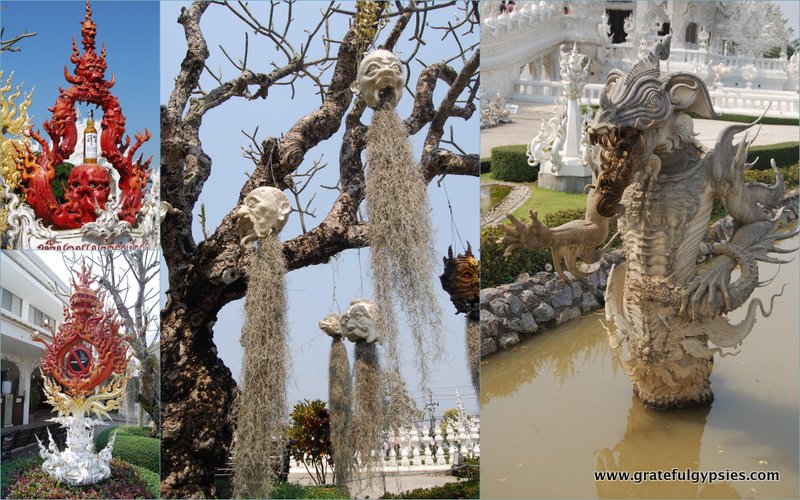 Creepy stuff around the temple.

Just before the bridge crossing over to the temple, you’ll find hands reaching up from the ground, some holding skulls. The hands symbolize those things that distract people from the path to Heaven, while the skulls represent those who have faltered on their path by succumbing to such evils. Oh yeah, and there’s a character from the movie “Alien” here as well. 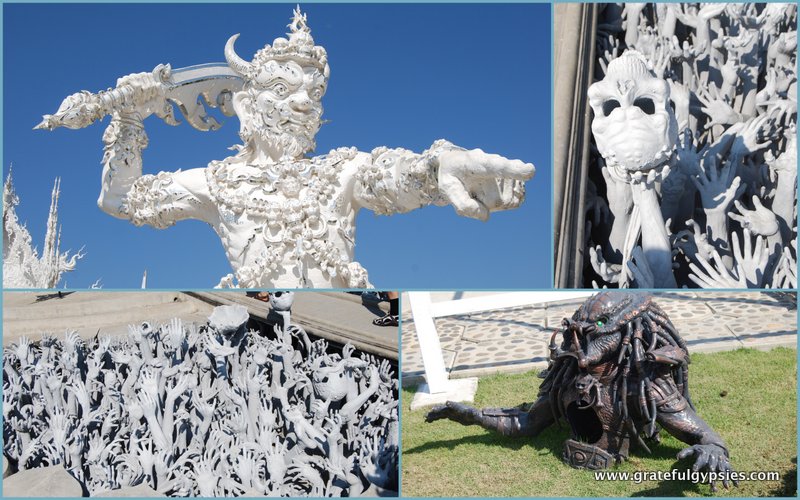 Manage to cross the bridge, though, and you’ve made it to Heaven. As the nice man with the loudspeaker reminds you – “Once you’ve crossed the bridge into Heaven, you cannot come back.” If Heaven is anything like the inside of this temple, that’s a good thing – you won’t want to leave once you set your eyes on the stunning murals that adorn the walls inside. Photography is not allowed, so you’ll just have to go see it for yourself. If you want to know how Spiderman, Neo, and George W. Bush somehow fit into the murals of a Buddhist temple, you’d better get here and check it out. 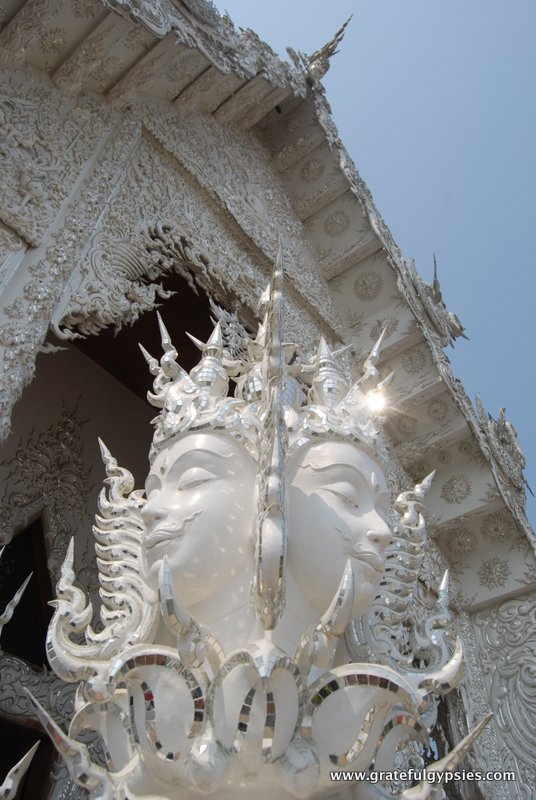 You’ve made it to Heaven!

There’s more to this complex than just the original temple. The artist plans for the project to take nearly 90 years to finish, and he has plenty of apprentices around to ensure that work will continue even after he’s gone. 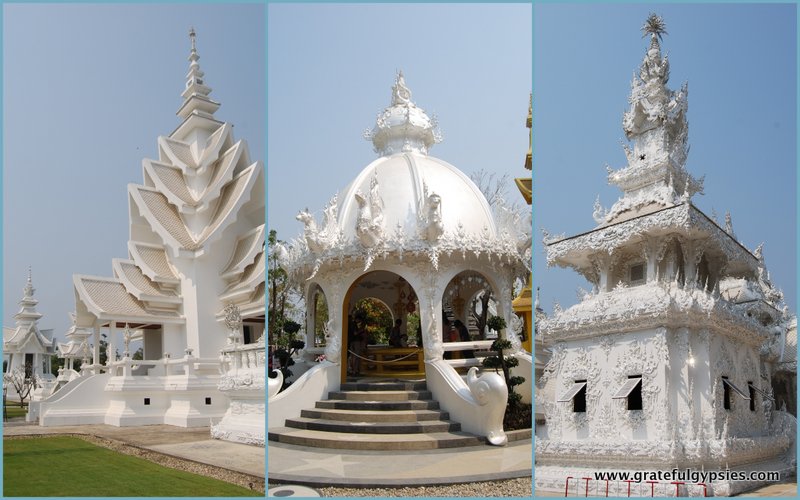 Surroundings of the temple grounds.

As if visiting this temple weren’t great enough, they probably have the coolest bathrooms you’ve ever seen. 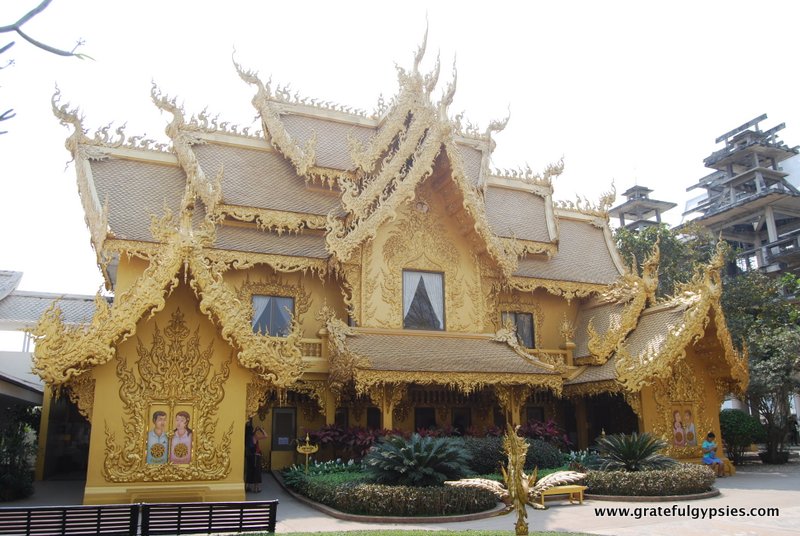 Unfortunately, an earthquake struck the temple on May 7th of this year. Although the initial reaction was all doom and gloom, it turns out that it wasn’t damaged beyond repair and the artist and his team are pushing forward with this incredible project. Another artist had a very different vision – let’s head across town to check it out. 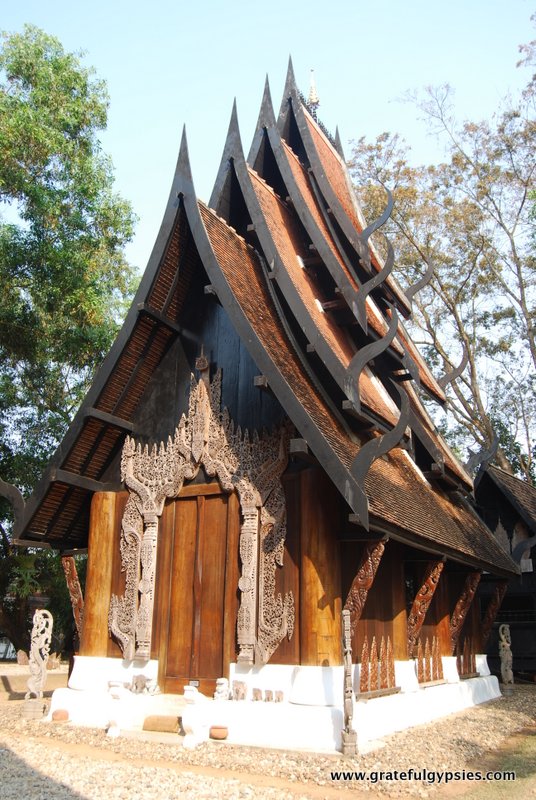 One of the many black houses.

Built by the late Thawan Duchanee (he passed away last month at the age of 74), the Black House Museum is a little tricky to find and much less visited than the White Temple. Known as “Baan Dam” (พิพิธภัณฑ์บ้านดำ) in Thai – บ้าน (baan) meaning “house” and ดำ (dam) meaning “black” –  it is actually a collection of houses and monuments that house some of the artist’s collections. We’re not talking Persian rugs and fine China here, rather animal skins, bones, teeth, fur, and so much more creepy taxidermy. From a full elephant skeleton to snake skins, there are lots of alternative decorations on display here. Animal lovers and vegetarians may want to stay away from this place, and you might think twice before bringing the little ones here. 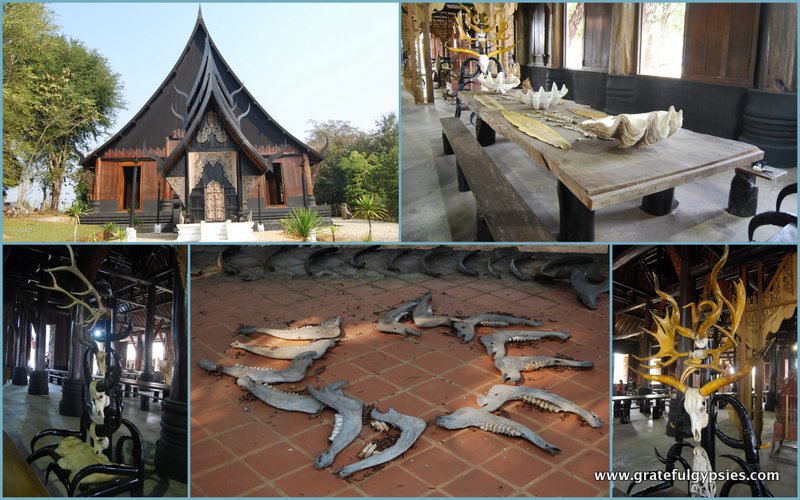 Some scenes from around the Black House. 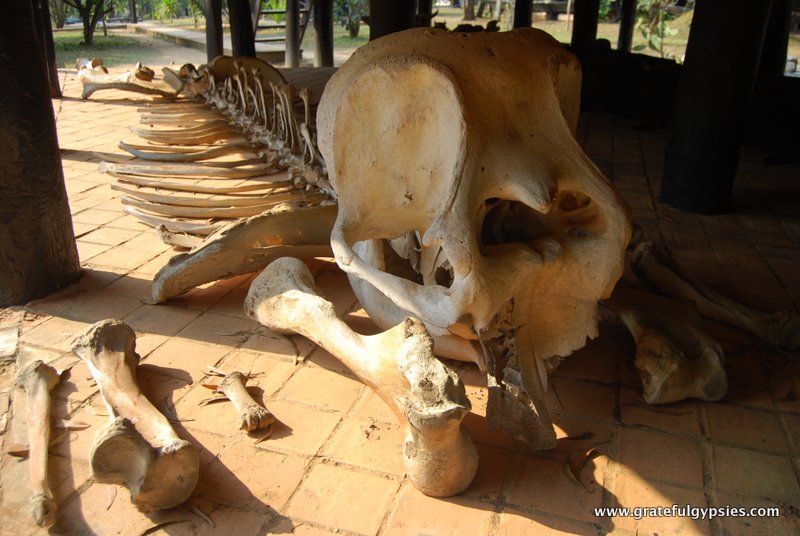 Elephant skeleton at the Black House.

Unlike the White Temple, there is no religious meaning to this vast complex. The artist actually called this place home, and he opened up many of the rooms for visitors. Enjoy wandering around the grounds, peeking into windows and taking a closer look. Although it’s hard to beat the one over at the White Temple, there’s a pretty funky bathroom here as well. 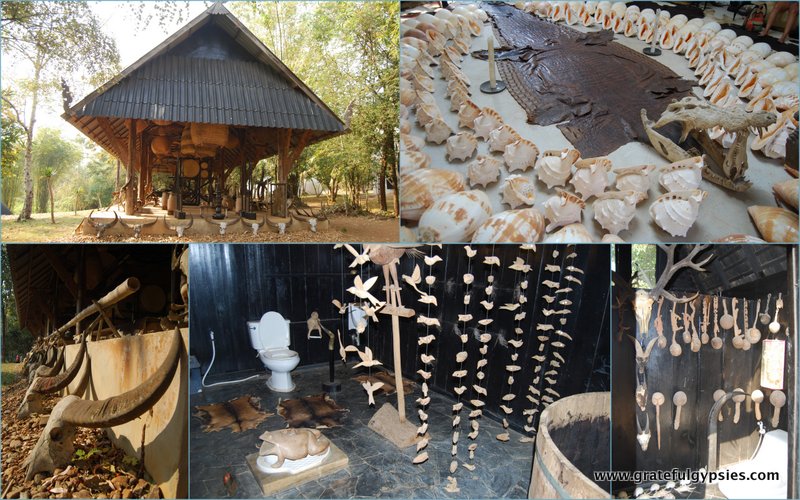 A collage of the Black House Museum.

Declared a national artist in 2001, Thawan will be greatly missed by the artistic community of Thailand. To quote Kositpipat (designer of the White Temple) – “He left behind an example for other artists to follow.” You can read more about the artist and his passing here. Although many associate his Black House complex with death, the artist himself said, “Everything in here represents the circle of life — birth, aging and decay.” The man may be gone, but his thoughtful and unique artwork remains for us to ponder for years to come. 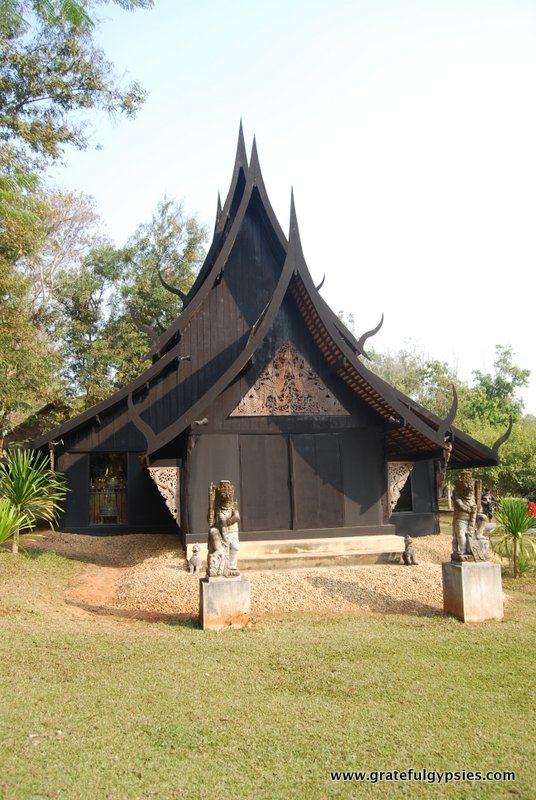 Stunning architecture at the Black House.