Thailand has approximately 1 million tribal people living within its borders. As the total population of Thailand is about 67 million people, that means the Chao1 Khao5 (mountain tribe people; ชาวเขา) represent about 1.5% of Thailands total population. But as fun as statistics can be, sometimes the best way to understand the lives and culture of Thailand’s hill tribe peoples is directly at the source.

On my very first trip to Thailand I had the lucky chance to visit one of the northern tribes, the Akha. I lived and worked with them for 3 days and 3 nights, giving me an opportunity to learn a lot about them first hand. Unfortunately at the time I spoke little to no Thai, and they spoke little Thai, too. Communication was a serious issue. What I learned was from observation, my friends occasionally translating, and research later on.

The trip started off with a daylong hike in Chiang Rai เชียงราย province. There were about ~18 of us, I being the only non-Thai in the group. I was never quite clear on how far we walked, but I’d guess a good 20 miles through various mountainous terrain. Nice scenery, but it was really really hot. After many hours of hiking, we finally arrived at a small village of huts, but not the one we were looking for. They told us we went the wrong way, and had another 10-20 miles to go (doh!).

Fortunately, the subsistence farmers had two pickup trucks (huh?). So we crammed into them, about 10 people per truck (adding the drivers). We then drove down dangerous roads on the side of a cliff with tree branches occasionally whacking us in the face. It was a ~2 hour drive. I remember the first hour being fun, with really great scenery, but the second hour I realized how dangerous it was and hoped it would end soon . . . 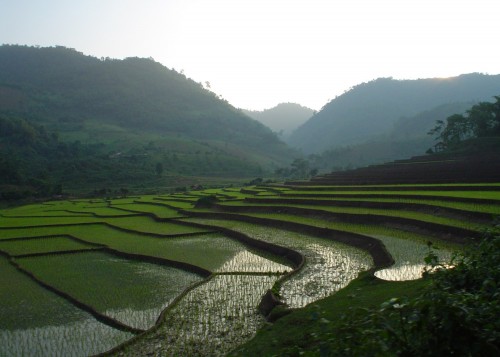 image: rice paddy I photographed on the truck ride to the village

And finally, we arrived just as the sun was setting. The village had approximately ~10 huts of various sizes spread about, and we all split up to stay with the families in each.

I remember that first night. It was me, two Thai friends of mine, and two mid-age tribal people in one decent-sized hut. The hut was lit up using a few candles and a small cooking fire. My two friends were talking with them, and it sounded like they were having a conversation. Unfortunately as I couldn’t speak Thai at the time, I had no idea what they were saying. And to be honest, the Thai and Akha languages sounded exactly the same to me. After about an hour of just listening, my Thai friend told me he didn’t really know what they were saying either lol . . . We were doing our best trying to be respectful, given the age difference.