That night we realized there were only two ‘showers’ in the village. A shower consisted of a wooden platform with cold water coming out of a spicket. There were no walls or curtains, and the ~10 guys had to share the same spicket. The women used the other open platform across the village, barely visible in the low light.

I slept really well that night. The morning however was horrible. The darn rooster ‘alarm’ started going off at 5:45am. The village apparently had a lot of chickens, and they were hungry. It was non-stop cock-a-doodle-doo for the next hour. But given our youth, we managed to sleep until 8am, missing breakfast. Doh!

Our mission in the morning was to walk a few miles to our work location. That morning we passed through the ‘other’ village. Apparently 20 years before, our village and this other village were the same village. However, Christian missionaries had come in and converted about half of them. The villagers then had a fight and split up. They still talk, though.

Anyway, we arrived at our work location. Our job was to carry and link up water pipes down this forest hill. After that was done, we had to collect large rocks and build a tiny dam that could collect water. Some cement was poured on to hold it in place and fill in the gaps. Others in our group dug ditches to bury the pipes, leading it to the second village we passed through earlier. They were soon to be the recipients of clean cold shower and drinking water.

We all donated money to pay for it, in exchange for the ‘hill tribe experience’.

The second day we got a guided walk through the village rice fields. They were all farmers and were planting rice on the side of the hills. They were fairly unskilled farmers, as they planted in dry fields while rice optimally grows in wet rice paddies. Our two guides told us they were trying to convince them to use better farming methods. 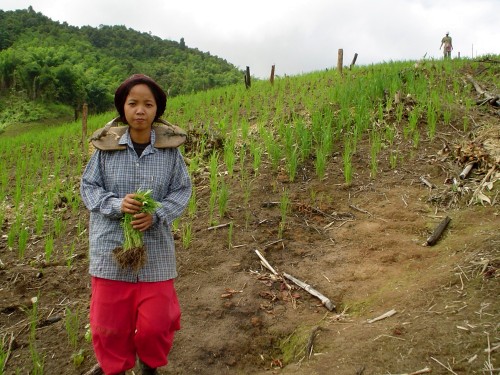