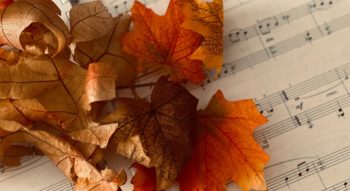 Listening to music and looking out a window, I saw a yellow storm in front of my eyes. A strong wind caused all the leaves that had changed their colors to detach from their branches, ascend into the air, and with gravity, descend to the ground. It was a breath-taking scene. There is something about the autumn air and colors that have inspired many poets and song writers to create many masterpieces.

If you talk about những bài hát vể mùa thu (Autumn’s songs), most of the Vietnamese music lovers, particularly the generation who were born before 1975 in the south, would know by heart these classic bài hát (songs) that carried mùa thu (autumn) elements in them like these listed below.

About the Song “Mùa Thu Chết”

Bài hát “Mùa Thu Chết” (Dead Autumn) by Phạm Duy has an interesting story. The Vietnamese lyrics were based on the famous French poem “L’adieu” by Guillaume Apollinaire. The famous Vietnamese poet Bùi Giáng translated the poem into a Vietnamese version and the famous song writer Phạm Duy composed the song. I’m not sure whether the lyrics of the song were based on Bùi Giáng’s poem translation or based on the original French version. They are all short, but powerful.

Since it’s so popular, bài hát này (this song) has been sung by many famous artists. In honor of the legendary ca sĩ (singer) Lệ Thu, who just passed away early this year at the age of 77 from COVID-19, I would like to link to the rendition of “Mùa Thu Chết” performed by her.