In this post, we’re going to look at a subtle aspect of Arabic grammar that can be confusing for some learners of Spoken Arabic, even advanced ones. This aspect is that of relative pronouns ضمائر الوصل

A relative pronoun is a pronoun that follows a noun in order to add extra information about it, in which case they are called determiners. The use of relative pronouns of this type is not widely taught or tends to be overlooked and that’s why we’re focusing on it in today’s blog as well as the next one. 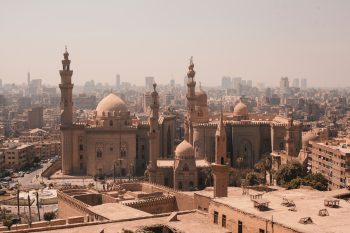 Image by Omar Elsharawy on Unsplash.com

In English, relative pronouns, such as which and that in this sentence “The book that/which I gave you” are used to give more information about the book.

1- In standard Arabic, this translates to the relative pronoun الذي Allathi and اللي  Elli in spoken Arabic. While Allazi in standard Arabic has a feminine version, that is التي  Allati, everyday Arabic does not have such a feature and only the masculine version Elli اللي  is the one used whether the noun under discussion is masculine or feminine.

So, the previous sentence in Arabic can be said as follows in Fusha:

In the case of a feminine name, a sentence such as “the table that/which is in the middle” can be said as follows in Fusha:

and as follows in Levantine Arabic:

As mentioned above, elli is used – in the second sentence in the case of Levantine Arabic –  even though the noun being elaborated on is feminine in Arabic – طاولة Taawle

2- Interestingly, in spoken Arabic, only one relative pronoun is used اللي whether the noun under discussion is singular or plural! This is not the case in MSA2Modern Standard Arabic where a distinction between a singular and a plural noun is marked by the use of different relative pronouns, such as اللذان  for the dual noun (masculine) and الذين  for the plural noun (masculine).

In order to illustrate this point further, let’s look at this example below from Levantine Arabic:

(The two books that/which you told me about)

In spoken Arabic, Elli is used to describe a dual noun (two books). Notice here that its grammatical form does not change from the previous example where it was used to elaborate on a singular noun الكتاب  il-ktaab. In MSA, however, the relative pronoun اللذان  allathaan must be used to match the dual noun which is also a masculine one – as follows:

(The books that/which you told me about)

In the next blog, I’m going to continue discussing other ways in which the relative pronoun Elli in spoken Arabic can be used.