In speaking a foreign language, do we have to sound native-like? No, certainly not! Being intelligible, in my book, is more important. Intelligibility affects communicating your ideas. 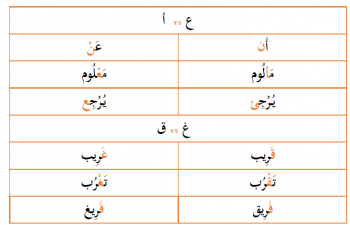 Among the difficulties that we encounter when learning a new language is the articulation of certain speech sounds. More specifically, the speech sounds that exist in the new language but not in our native languages. Owing to insufficient exposure to these sounds, we pronounce them in a way that resembles the sounds of our native language. It is essential that these sounds be perceived accurately and practiced correctly and amply from the outset; if not, mispronouncing them would be a commonplace and uneasy to repair later. Unfortunately, this is the case for most of the people learning new languages; hence, they tend to have heavy/foreign accents when they speak, especially if the native language and the learned language vary a lot in the sound system. Let’s look at English learners of Arabic as an example.

There are two sets of Arabic sounds that are particularly difficult for native speakers of English. The first set includes ع, غ, ح, and خ. The second sets is similar the English s, z, t, and d, except that they are produced with a raised tongue-root. They are ص, ض, ط, and ظ.

So what is the problem? What does the mispronunciation result in? 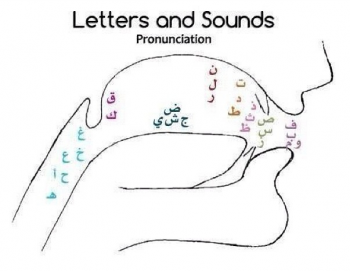 As for the second set, the problem lies in the inability to raise the tongue root by the native speakers of English. Therefore, they pronounce ص, ض, ط, and ظ as س, د, ت, and ذ, respectively, as in this list:

Meaning-wise, this set is not as grave as the first since words that vary between the two pairs of sounds are of low frequency. As to pronunciation, they are easier to produce since they differ from their English counterparts only in one thing—raising the root of the tongue.

So, what is the point of all this? How does this make me a more able user of Arabic?

To learn a new language resembles in many ways learning a new general skill. That is, it is vital that we know the rules behind what we produce in a speech form. More specifically, correct perception of sounds leads to better production/pronunciation. Perception is achieved through knowing the right mechanism of producing sounds. Supplementing this with a good deal of listening to these sounds makes them easier to perceive and subsequently produce. You may want to check Transparent Language Online or other resources on the Internet.

Now let’s put into practice we have learned.

a) Using YouTube, find recordings of the sounds discussed above. Listen to them and repeat as much as you can (i.e. until you feel comfortable producing them).

b) Using an Arabic dictionary, list three words for each of the sounds discussed above along with their meanings.

c) Practice reading them out loudly.

d) Whenever you use Arabic in real situations, try paying special attention to the above sounds. By time, your pronunciation of these sounds will improve substantially.