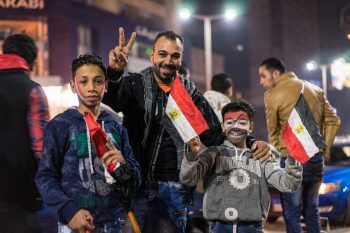 Egyptian Family by Mark Fischer from Flickr.com is licensed under CC BY-SA 2.0

As is the case in almost all languages, there are always some culturally untranslatable phrases that cannot be literally translated into other languages or do not have a straightforward equivalent in other languages. Today, we are looking at a group of these untranslatable phrases that are often used in colloquial Egyptian Arabic to describe men who have certain positive character traits.

There are eight of these phrases in Nancy Ajram’s song ‘El-masry man’ المَصْرِي مَانْ  which means: the Egyptian man is a real man. Below, you will find a short explanation of each of these phrases, which will be listed according to the order they appear in which they appear in the song (check video below). Because there are many of them, this post will be divided into two. In the first part, we will focus on the first four of these phrases and will focus on the other four in the second part of the blog.

What you can easily notice about these phrases is that if they are translated literally, they either sound very odd, if not funny. In much cases, the literal translation does not make much sense. In others, they are just very different from how an English speaking person would think of the same meaning.

Here are the first four phrases with literal translation and how they are pronounced:

(His blood is light)

(His blood is very hot)

It’s used to refer to someone who is cute, funny, witty, cheeky and lovable. Interestingly, this phrase combines all these traits rather than a single one of them only. Because of its efficiency and all these layers of meaning it includes, it’s very popular phrase.

It’s used to describe someone who has dignity and is worthy of respect and esteem. It also means someone with a good reputation.

It’s used to describe someone who he is fiery, very reliable, and is always there for others and ready to help them. In the song, the singer explains this by saying: ‘It’s known that when you need him, you find him’.

See you next week to talk about the rest of the phrases, stay tuned!