Deemed as one of the most difficult languages to learn, some may wonder what makes Arabic so. Well, one aspect of difficulty is the variation between the standard formالفُصْحَى  (formal, educational form) and the dialectal, colloquial, conversational form العَامِّيَّة. As to numbers, as is the case with most variations, the difference is morpho-phonological. That is, some words are blended (in the case of 11-19), and sounds are pronounced differently. 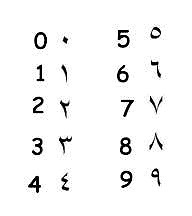 Image by Babak Fakhamzadeh on flickr.com

In MSA, cardinal numbers have masculine and feminine forms. The feminine is derived from the masculine by adding the feminine marker ‘taa marbuuTah’ ة / ـة to the end, hence ثَلَاث becomes ثَلاثَة and أَرْبَع becomes أَرْبَعَة and so forth.

Except for numbers 1 and 2, numbers from 3 to 10 have the same form both masculine and feminine, hence speakers of this dialects say تِسْعَه بَنَات tis‘a banat ‘nine girls’ and تِسْعَه وِلَاد tis‘a wilaad ‘nine boys.’

This dialect resembles the Levantine, except that for consonant clusters. In Egyptian, a sequence of two consonants is broken by inserting a vowel before or after a consonant, hence tniin, tlaate, and tmaanye in Levantine become itniin, talaata, and tamanya, respectively. Breaking of consonant clusters by vowel insertion is common in Egyptian Arabic.

Peninsular Arabic, which includes Yemeni Arabic, Saudi Arabic, and Arabic of other Gulf States, resemble to a great measure that of MSA. Variation in pronunciation is really scant, as seen in the list.

A distinctive feature of Moroccan Arabic is over-clustering. That is, short vowels of MSA are oftentimes dropped and replaced by a sequence of sukoons, i.e. a cluster of two or more consonants. This phenomenon is what make this variety of Arabic difficult to follow / understand. Take the case of khmsa, stta, sb‘a, and thmnya, in each word there is a cluster of three consonants. This makes the dialect difficulty to mimic and understand by other speakers of Arabic.

As for juuj, which is sometimes pronounced as juuz, it is taken from the MSA word zawj ‘a pair of’. This word is common in Yemeni Arabic as well and used in pretty much the way as by Moroccans. ts‘uud is an interesting case.