We use the language to share our feelings and thoughts. This entails expressing a state of being or an action. In Arabic, the latter is done using a verbal sentence. As the name suggests, it should contain a verb; plus, it, the verb, must occur sentence-initially. To make sense, it is essential that we know whether the verb requires an object (i.e. intransitive لَازِم laazim) or not (i.e. transitive مُتَعَدِّي muta‘addii). 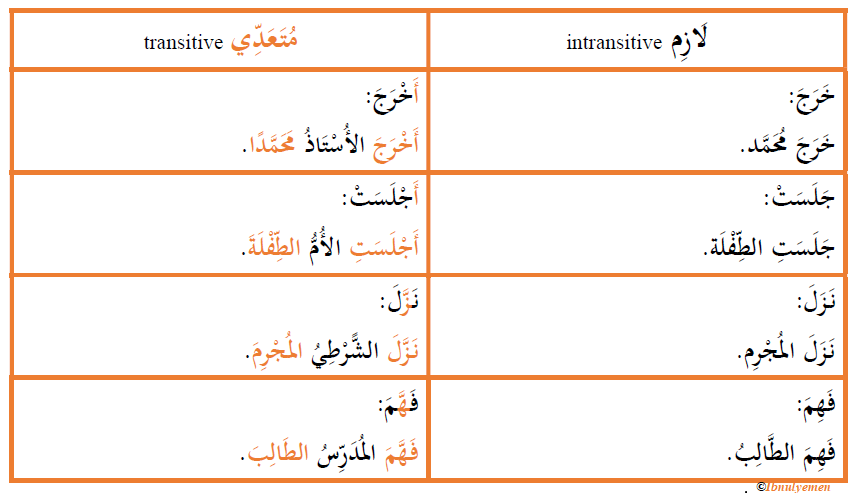 Put simply, an intransitive verb is a verb that does not require an object. For instance, the English sentences (1) and (2) are completely meaningful without an object, and so is the case with the corresponding Arabic ones.

What is a transitive مُتَعَدِي?

It basically is the opposite; that is, the sentence is not meaningful unless an object is added. For example, the English sentences (3) and (4) do not make a complete sense, and so are the respective Arabic translations.

To make them meaningful, an object must complement the verb, as is in (5) and (6).

Hence, ضَحِكَ and تَبْكِي are intransitive verbs, while ضَرَبَ and تَرْمِي are transitive. Hmm! How do we know what is what? Well, this is oftentimes implied in the meaning of verbs. Furthermore, intransitives normally express behavior, appearance, mood, or condition. However, it is important to know that an intransitive can be made transitive, but not the other way round.

How to change an intransitive verb into a transitive?

There are three ways to do this:

a) by means of a prefix, namely أ, as in the table above and in (7), (8), and (9). The intransitive verbs ضَحِكَ, بكَى, and فَرِحَ become transitive after adding أ hamzah to the beginning to form أَضَحَك, أَبْكَى, and أَفْرَحَ, ‘make laugh’, ‘make cry’, and ‘make happy’, respectively.

Seemingly, أ and ّ are used with pretty much the same meaning. However, this is not the case; rather, the insertion of ّ on the middle letters signifies repetitiveness in the action; e.g., ضَحَّكَ ‘make somebody laugh’ means the action of laughing was done repetitively, and so is the case with بَكَّى  and فَرَّحَ in (11) and (12), respectively.

As for the addition of ا after the second letter, as in (c), it always means participatory roles in performing the action. That is, the action is done by both persons/things involved in the sentence.

Make these intransitive verbs intransitive in at least two ways. Use your dictionary for help. Also, attempt to use them in sentences. Answers will be posted on our Facebook Page 24 hours later.