The basic verb in Arabic cannot be bi-consonantal. It must be composed of three, four, five, or six consonants. Looking at the Arabic dictionary, the bulk of verbs is tri-consonantal. These three consonants are ineliminable, for they are integral to verb meaning. Is this the reason it is called simple مُـجَرَّد? Exactly! Let’s look at this in more detail, shall we? 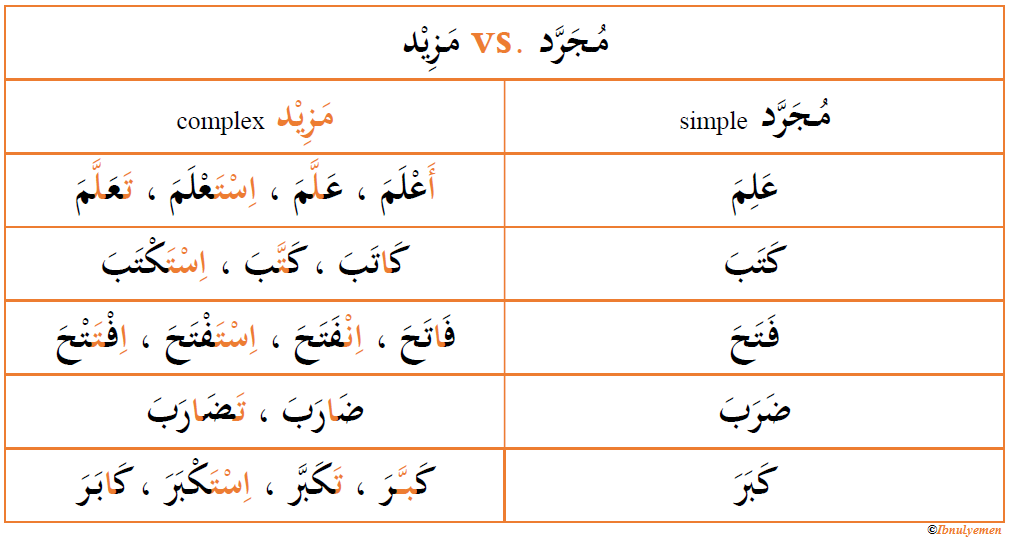 Take the word كَتَبَ whose basic meaning is to write. Dropping any of its component letters renders it meaningless. Neither كَتَ, تَبَ, nor كَبَ has meaning. Conversely, the word كَتَّبَ ‘to cause to write’ is decomposable. That is, if we eliminate one of its component letters, namely the تْ, it retains its basic meaning. To illustrate further, in the word تَكَاتَبَ ‘to write to each other’ two letters are eliminable, i.e. the first تَ and the ا, yet the remainder word preserve the basic meaning. So, what generalizations can we make from this brief analysis?

The compositionally unanalyzable verbs are called simple مُـجَرَّد; the decomposable are called complexمَـزِيْد . They are both lexically (at the word level) and semantically (i.e. meaning-wise), and grammatically different. Lexically, simple are tri-consonantal and unanalyzable, whereas complex comprise four to six letters; as well, they are always derived from simple through affixes (i.e. additional letters). Semantically, the basic meaning of complex comes from the simple, and additional complexity in meaning comes from the affixes which also affect the grammatical structure of sentences. So, “how do we know these letters?”, you may ask.

Fortunately, these letters are predefined. They are called حُرُوْفُ الزِّيَادَة ‘letters of addition.’ They are combined in the phrase “هناء وتسليم”; i.e., they are هـ, ن, ا, ء, و, ت, س, ل, ي, م.

Except for a few rarely used quadri-consonantal (i.e. of four consonants), simple verbs, which are always in the basic past form, are generally tri-consonantal, as in Figure 1. To form complex verbs, letters of addition are added to beginning or middle of the simple verb, as highlighted in Figure 1.

Essentially, the addition can be one letter, two letters, or three letters. Each type of addition has semantic and, in a few cases, grammatical effects. How?

The one-addition can be one of three: adding أ, شَدَّة , or ا , as in Figure 2. Each of them has multiple meanings and functions, but I am citing the most common here. The أ changes the verb from intransitive (i.e. needs no object) to transitive (i.e. needs an object). Similarly, the شَدَّة changes the verb from intransitive to transitive; as well, it means the actions is done multiple times (i.e. exaggeration in doing the action). The ا means the action is done by two parties, i.e. you do something to someone, and he does the same in return.

The two-letter addition can be one of four: adding ا  and ن, ا  and ت, ت  and ا, and ت  and شَدَّة, as in Figure 3. Among others, these additions most commonly have the following meanings and functions. As for انـ, it changes the verb from transitive to intransitive. ا and ت indicates participation and willingness in doing an action. Similarly, ت and ا signifies, besides participation, willingness in doing an action. As to ت and شَدَّة, it indicates the desire and perseverance for achieving an action.

The three-letter addition can be one of four, but owing to time and space, I focus on the most common—adding استـ to the start of the simple verb, as in Figure 4. This addition indicates request to do an action (i.e. the action of the verb to which it is added).

Now, let’s have example sentences for each of the additions above.

نَزَّلَ الرَّجُلُ الأّثَاثَ مِنَ الغُرْفَةِ. ‘The man brought down the furniture from the room.’ (i.e. he had to go up and come down a few times to have it all brought down).

Now, let’s put what we have learned into practice.

(1)  Make these simple verbs complex. Use your dictionary for meaning.

(2)  What is the simple forms of these complex verb.

(3)  The verbs in Figure 1 are of high frequency, translate them. Then try using them in meaningful sentences paying attention to the rules you just learned. If you have a question, leave it in the comment.