الأَبْجَدِيَّة العَرَبِيَّة al-abjadiiyah al-‘arabiiyah, i.e. the Arabic Alphabetical System, includes twenty-eight letters. In addition to the alif ا and the alif al-madd آ, they are thirty.  Nearly all these letters are consonants. Vowels are two types: long and short. Long vowels are represented by letters, while the short ones are represented by diacritical marks. Each letter has four pronunciations based on the short vowel that accompanies it. This post provides the essential information that you need to know about the Arabic Alphabetical System. 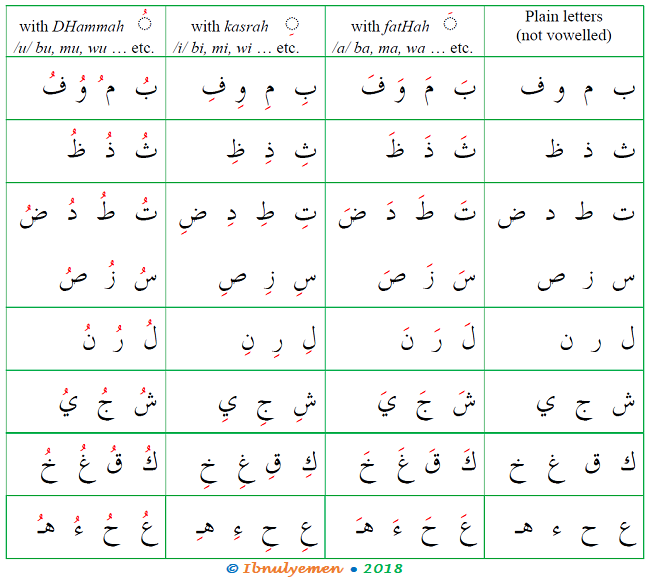 In the table above is a list of the Arabic letters / sounds. They are ordered according to the place of articulation, that is from the front of the oral cavity (the lips and teeth) to the back (the throat). In the first right column, the letters are not accompanied by diacritics, so they are called saakinah (i.e. with no short vowel), and hence are pronounced as b, m, w, f, … etc.

As seen from the table above, the fatHah َ and DHammah ُ are written on the letter, while the kasrah ِ is written below the letter. As for the long vowels, they are simply connected to the preceding consonant, and they trigger the appearance of corresponding short vowels on the letter to which they are joined.

You may be wondering what the difference between the hamzah ء and the alif ا is. While the hamzah can be accompanied by short vowels, that is ءَ, ءِ, and ءُ (i.e. ‘a, ’i, and ’u), they never accompany the alif, as it is always saakin (i.e. accompanied by sukuun).

Arabic is a cursive language; letters must be joined to form words. Almost all the letters have four different shapes: in isolation, word-initially, word-medially, and word-finally, as shown in the table below.

Six letters in table above don’t join to subsequent letters; they only join to preceding letters. These are ا, د, ذ, ر, ز, and و.

The following examples illustrate how the Arabic letters look like in actual words.