Difference in prepositions between Arabic and English (Part 1) Posted by Hanan Ben Nafa on May 24, 2017 in Arabic Language, Grammar 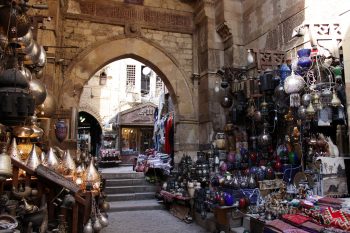 Learning prepositions and using them in the correct way can be a bit tricky across languages. Today, we’re looking at several of prepositions in Arabic and English and learn about the subtle differences between them.

Some of the simple prepositions that exist in both languages (Arabic and English, in this case), such as ‘in’ can be simply considered equivalent and used in the same in both languages, but today we’ll see how is this not the case. Through looking at specific examples, we’ll explore this in details and learn how, for example, a single Arabic preposition can have multiple meanings, depending on the context, and can, therefore, be translated into different English prepositions, up to three different prepositions, in some cases. Interestingly, the same can be also true for some English prepositions.

The first preposition we’re looking at is:

The preposition من is generally translated as the English preposition ‘from’, for example:

1- I got my shirt from that shop

However it can also be used to refer to the person’s origin, for example:

2- I come from Libya

In this example, min من  replaces the whole phrase of ‘come from’ used in English.

Another purpose for which من  is used as comparison, for instance:

Finally, it can also be used as equivalent to the preposition ‘of’ in some context, as this one in the following example:

4- There is a big number of audience.

As we you can see, a simple proposition as ‘min’ can be translated into three different ones in English.

Sometimes, it’s the other way around and one English preposition can be translated into different Arabic prepositions. This means that a single preposition in English, which can have different uses and meanings in different context, can actually appear as totally two different prepositions in Arabic. Ti illustrate this, let’s look at the next example:

can have two equivalents in Arabic, which are:

However, it’s not always as simple as that. ‘with’ can also be sued to refer to the manner in which something occurs. In this case, the Arabic equivalent here is بِـ   bi, for example:

2- He spoke with confidence.

See you in next week’s post where we look at more of those tricky prepositions!