Envy and the Evil Eye in Arab and Islamic Culture الحسد Posted by yasmine on Dec 19, 2018 in Arabic Language, Culture

What do you know about the “evil eye” العين الحسود in Arab and Islamic culture الثقافة العربية والإسلامية? Like many people in the Middle East, I grew up believing in the power of envy الحسد and the existence of the evil eye. That one could envy intentionally and unintentionally, therefore, it’s always best to say the magic words “Ma shaa’ Allah” (As God wills, May God be the protector): ما شاء الله …just in case.

Muslims generally believe in the existence of the evil eye because it is mentioned in the holy Quran and only some dismiss it as superstition. So, how does the “evil eye” work? Basically, it is envying someone for something they have which you yourself don’t have therefore you wish ill upon them. But, in Arab and Islamic culture, it goes a bit deeper than that. One could innocently say to someone with a new car “Oh that’s a nice car!” Yet, since envy is thought to do its work through the human eye, something bad could still happen like the car could break down. So, again to avoid any ill-will, you need to “say the magic words” ما شاء الله.  More examples are houses, anything new, and the most important: a new baby. 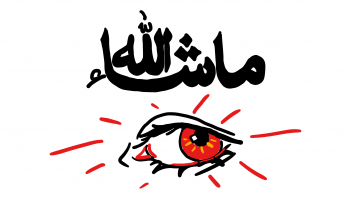 So, how does knowing about the evil eye affect you as an Arabic learner? As someone traveling to an Arab country or even visiting an Arab friend, if you happen to compliment someone or something they have, it’s always best to say ما شاء الله right after the compliment so they know you mean no harm.

As you may have noticed, the Arabic language is sprinkled with Godly phrases. But, even if you feel unconformable saying them, know that it will definitely make the other person feel better assuring them that you have not envied them. Think about the evil eye as part of the Arab culture that needs to be respected if you want to avoid any misunderstandings.

Remember, it’s alright to give someone a compliment, just add on the magic words!