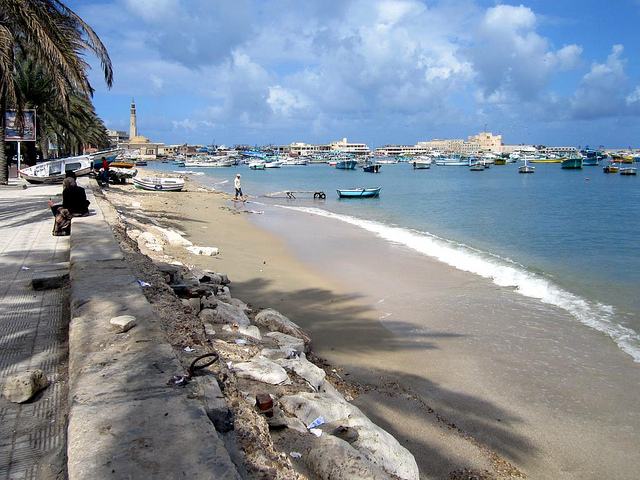 Nicknamed the “Bride of the Mediterranean عروس البحر المتوسط  “, Alexandria is the second largest city of Egypt with a population of about 4 million extending along 32 km along the coast of the Mediterranean Sea البحر المتوسط in the north central part of the country. It is also the largest city lying directly on the Mediterranean coast. It is Egypt’s largest seaport serving about 80 % of Egypt’s imports and exports. Alexandria is also and important tourist resort. It is home to the Bibliotheca Alexandria مكتبة الإسكندرية (the new Library of Alexandria). It is an important industrial centre because of its natural gas and oil pipelines from Suez.

Alexandriawas founded around a small pharaonic town (called Rhakotis راقودة in ancient Egyptian language) 331 BC by Alexander the Great الاسكندر الأكبر. It remained Egypt’s capital for nearly a thousand years until the Muslim conquest of Egypt in AD 641 when a new capital was founded at Fustat (Fustat was later absorbed into Cairo). Alexandria was known because of its Lighthouse of Alexandria منارة الإسكندرية ; one of the Seven Wonders of the Ancient World. It was also famous for its Library مكتبة ; the largest library in the ancient world and the Catacombs of Koom Al-Shoqafa سراديب الموتى فى كوم الشقافة ; one of the Seven Wonders of the Middle Ages. Continuous maritime archaeology in the harbour ميناء ofAlexandria, which began in 1994, is revealing details of Alexandria both before the arrival of Alexander and during the Ptolemaic Dynasty.

Alexandriawas founded by Alexander the Great in April 331 BC as Ἀλεξάνδρεια (Alexándreia). Alexander’s Chief architect for the project was Dinocrates دينوكراتيس  who intended it to supersede Naucratis as a Hellenistic centre in Egypt and to be the link between Greece اليونان and the rich Nile Valley. A few months after the foundation, Alexander left Egypt and never returned to his city. His viceroy نائب ; Cleomenes كليومينيس continued the expansion of the city. Following a struggle with the other successors of Alexander, it is said that his general Ptolemy بطليموس succeeded in bringing Alexander’s body to Alexandria.

Although Cleomenes was mainly in charge of overseeing Alexandria’s continuous development, the Heptastadion and the mainland quarters seem to have been primarily Ptolemaic work. Inheriting the trade of the ruined Tyre صُور and becoming the center of the new commerce between Europe and the Arabian and Indian East, the city grew in less than a generation to be larger than Carthage قرطاج . In a century, Alexandria had become the largest city in the world and, for some centuries more, was second only to Rome روما . It became Egypt’s main Greek city, with Greek people from diverse backgrounds.

* Adapted and translated from wikipedia