How to pronounce the letter “ق” when SPEAKING Arabic Posted by yasmine on Dec 12, 2018 in Arabic Language, Culture, Pronunciation

So, you’ve learned to read in Arabic and you’ve practiced how to pronounce the “ق” which is a “Q” sound in the back of your throat. Then, you hear Arabic speakers talk and realize that sometimes the letter “ق” is being replaced with another sound. Why is this so?

Before reading this post, did you ever notice “ق” being pronounced differently?

Like many concepts in spoken Arabic, nothing is written in stone. It’s difficult to give a rule of thumb. Some things you’ll just have to learn while conversing with native speakers. So, before I continue, know that it’s not the end of the world if you pronounce “ق” in any of the following ways. This post is to help you be aware of these differences and the reasons behind them to prevent any confusion. 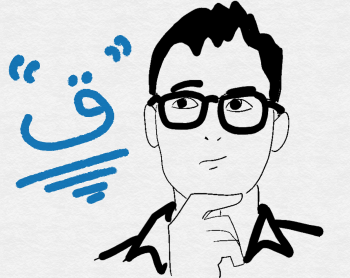 What are these other sounds?

In order to understand why it could be pronounced differently, let’s first look at which cases Arabic speakers speak only in MSA, only in dialect, and mix the two.

MSA is used when discussing formal topics such as news, academic matters, religion, technical vocabulary, etc. Thus, since we are speaking in MSA, the “formal” pronunciation of “ق” is used just as if you were reading a text.

Dialect is used when informal topics are discussed such as everyday conversations with family and friends. Here, you’ll find any of the above pronunciations being used.

Sometimes a speaker will mix the two, for example, a man is discussing the country’s economy and using economical terms which of course is in MSA, then decides to give his own opinion on the matter and switches to dialect. Here, you’ll find both the formal “ق” pronunciation and one of the three above.

Two other factors to consider is area (city or rural), and gender.

For example, in Palestine, depending on which city you are in, you could hear “ق” pronounced as hamza, “ك”, or “g”.

In Jordan and Palestine, some men pronounce “ق” as “g” due to it sounding more Bedouin hence more masculine. Whereas, women pronounce it as a hamza since it’s softer to sound more feminine.

In Lebanon and Syria, both men and women pronounce the “ق” as a hamza.

Here is a short clip in Jordanian dialect of a man excited to drive his new car. Listen closely to hear how words with “ق” such as: قواعد، سواقة، بتلزق، بقلقني، طريق are being pronounced.

I’ll end this post by saying that if you are strictly learning MSA, then stick to the formal “ق” pronunciation. Yet, for those of you who wish to converse with native speakers, it’s good to know beforehand that such nuances exist in spoken Arabic. Most importantly, do not let these nuances discourage you from talking to native speakers. When ever you get the chance, whether online, or in person to speak Arabic, go for it!