Ibn Khaldoun Posted by aziza on Nov 14, 2009 in Arabic Language

Ibn Khaldoun (ابن خلدون) is a famous medieval Islamic historian and scholar who was born in Tunis in 1332 AD/732 AH, and who travelled extensively. He is a famous historian, sociologist, philosopher, among others. He was born to a rich and well-educated family of politicians and scholars, with ancestry in Andalusia. In his childhood, he learned the Quran (القرآن), Prophetic Sayings (الحديث), Arabic grammar (النحو) and Islamic law (الشريعة)at the hands of the best scholars at that time. He also learned logic (المنطق), philosophy (الفلسفة) and mathematics (الرياضيات).

Ibn Khaldoun lost his parents and many of his teachers in an outbreak of plague in North Africa when he was 17. This affected him deeply; then he pursued a career in politics which gave him popularity among many North African rulers; but due to rivalries, it left him in prison then in exile. He was sent by different rulers to diplomatic missions to Andalusia and to different parts of Africa, especially to Berber tribes, as he had strong relationships with them. During one of his missions, he sought refuge with a Berber tribe; and for three years, he dedicated all his time to writing his Muqaddimah (مقدمة ابن خلدون) “Introduction” to his version of world history in which he introduced very important concepts in social sciences and related them to history, such as sociology and demography. It is also considered to be the first book in the philosophy of history.

Ibn Khaldoun visited Egypt where he became a judge and respected scholar, but he gave it up when his wife and children died on the trip to join him, and he decided to undertake Pilgrimage (الحج). After his return, he worked on his history books, and then he participated in a military campaign with the Egyptian army to stop a Tatar attack on Damascus. He negotiated with the Tatar ruler Timur and wrote him an account of the history of Maghrib. Later, he wrote an account of the history of Tatars and sent it to the ruler of Maghrib.

Ibn Khaldoun wrote his own autobiography in which he described his journeys to the East and West, under the title (التعريف بابن خلدون ورحلته غربا وشرقا) or “Introducing Ibn Khaldoun and his Journeys East and West”. He is regarded as the father of sociology (علم الاجتماع), as he discussed very important concepts like social conflict, generation, tribalism, etc. Ibn Khaldoun’s books were translated into Greek and then into French, and were received very well in the Western world. 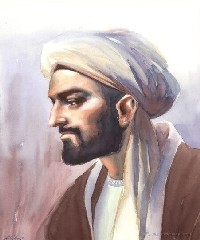