MarHaba from the newest Arabic Blogger Posted by yasmine on Nov 21, 2018 in Arabic Language

مرحباً!  My name is Yasmine and I will be posting about Arabic language and culture here on the Arabic Language Blog! I thought I’d share with you my background خلفيتي in learning Arabic and experiencing the Arab culture.

I was born in the United Sates to an American mother and Jordanian father. My parents had a plan to eventually move to Jordan for good. English was my first language, and my parents knew that if I were ever to acquire Arabic, the sooner the better. So, at the age of 10, (knowing only words like شكراً) I was sent to Amman, Jordan to live with my Arabic-speaking grandmother and begin fourth grade in a mainstream Jordanian school where of course, everything was taught in Arabic! At the beginning, it was very tough to look at the chalk board in class and see only scribbles. I went from being an “A” student back in the US to feeling like a total alien at school and where basic subjects such as science and math were suddenly incomprehensible.

I began taking intensive Arabic classes دروس عربية مكثفة beginning from the alphabet and so forth and (very slowly) began understanding my teachers and peers. At home grandma (Taita تيتا) spoke only in Arabic to me and after school I played outside with other children in the neighborhood. Playing internationally known games such as hide and go seek in Arabic helped me pick up more and more of the language. I was fully immersed in the Arab culture and surrounded by native speakers. 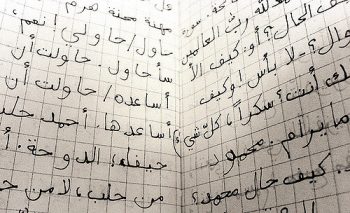 image by Sylvain mazas from Flickr.com is licensed under CC BY-ND 2.0

I remained in Jordan living with my تيتا for three years. Eventually, my family then followed me to Jordan and we moved into a new house. My younger sisters then became immersed in the Arabic language and Jordanian culture as well. I continued living in Jordan until I graduated from university.

I decided to come back to the US to earn my master’s degree and teach Arabic as foreign language. The challenges التحديات I faced learning Arabic has allowed me to understand the difficulties my students go through, which has helped shape my teaching methods أساليب التدريس. When I look back at my experience trying desperately to communicate in Arabic to make friends and survive at school, it was difficult, but I learned so much! I can now comfortably consider myself a fluent speaker of Arabic متقن اللغة العربية and a true Jordanian.

Word of advice: If you ever get the opportunity to travel to an Arabic speaking country to learn or improve your Arabic, go out and mingle with Arabic speakers and if they speak English to you, ask them politely to speak only Arabic to you.

Stay tuned for more posts! Looking forward to your comments, suggestions and questions!