The founder of modern Egypt Posted by aziza on Jul 5, 2010 in Uncategorized

Muhammad Ali Pasha (محمد علي باشا) was the ruler of Egypt and Sudan. He is regarded “the founder of modern Egypt,” because of the dramatic reforms in the military, economic, and cultural spheres that he instituted. He established dynasty that ruled Egypt and Sudan until the Egyptian Revolution of 1952. 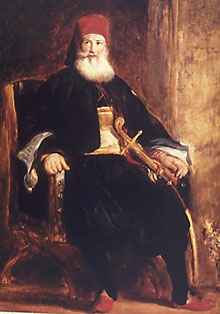 Image by Zakksez on Wikipedia

Muhammad Ali was born on 4 March 1769 in the Ottoman province of Macedonia (now a part of modern Greece) to Albanian parents. When his father died at a young age, Muhammad was taken and raised by his uncle with his cousins. In 1801, the Albanian commander of the Ottoman army was sent to re-occupy Egypt following a brief French occupation. Muhammad was second in command under his cousin in the Kavala Volunteer Contingent, which was itself part of a larger Ottoman force.

The French withdrawal left a power vacuum in the Ottoman province. Mamluk power had been weakened, but not destroyed, and Ottoman forces clashed with the Mamluks for power. During this period of anarchy Muhammad Ali used his Albanian troops to gain power and prestige for himself. A group of prominent Egyptians demanded that the Wāli (governor), Ahmad Kurshid Pasha, step down and Muhammad Ali be installed as the new Wāli in 1805.

The Ottoman Sultan, Selim III, was not in a position to oppose Muhammad Ali’s ascension, thereby allowing Muhammad Ali to set about consolidating his position. The Mamluks still posed the greatest threat to Muhammad Ali. They had controlled Egypt for more than 600 years, and over that time they had extended their rule extensively throughout Egypt. Muhammad Ali’s approach was to eliminate the Mamluk leadership. In 1811, he invited the Mamluk leaders to a celebration held at the Cairo Citadel. When the Mamluks arrived, they were trapped and killed. After the leaders were killed, Muhammad Ali dispatched his army throughout Egypt to rout the remainder of the Mamluk forces.

Muhammad Ali’s goal was to establish a powerful, European-style state.  In order to do that, he had to reorganize Egyptian society, streamline the economy, train a professional bureaucracy, and build a modern military.  His first task was to secure a revenue stream for Egypt. To accomplish this, Muhammad Ali ‘nationalized’ all the land of Egypt, thereby officially owning all the production of the land. He accomplished the state annexation of property by raising taxes on the ‘tax-farmers’ throughout Egypt.

In addition, Muhammad Ali built an industrial base for Egypt. He focused on weapons production. He also established a textile industry in an effort to compete with European industries and produce greater revenues for Egypt. While the textile industry was not successful, the entire endeavor employed tens of thousands of Egyptians.

Muhammad Ali also made an effort to train a professional military and bureaucracy. He sent promising citizens to Europe to study. Again the driving force behind the effort was to build a European-style army. Students were sent to study European languages, primarily French, so they could in turn translate military manuals into Arabic. He then used both educated Egyptians and imported European experts to establish schools and hospitals in Egypt. The European education also provided talented Egyptians with a means of social mobility.