The Vocative Particle يا Posted by yasmine on Mar 31, 2021 in Arabic Language, Grammar

As Arabic language learners, you have most likely seen and heard the vocative particle يا being used before nouns. Can you think of any examples? In this post, I thought we’d understand its purpose in Arabic and look at how it is used through reading and listening to examples. Does the vocative case happen to exist in your language?

يا is a vocative particle, similar to “O” in English yet used much more frequently in Arabic without sounding a bit strange or archaic as it may sound in English. يا is used to address someone or a people. The vocative can serve as a means to send an invitation to the spoken-to in order for him/her/them to pay attention to what the speaker wants to say. It can also put emphasis on the one being called or addressed.

In some contexts, a close equivalent to modern day English is “Hey” when calling out to someone, for example, يا علي “Hey Ali”. You will find that يا is used in both Modern Standard Arabic (MSA) and colloquial Arabic. In this post we will be looking at examples in MSA. You can find many examples of يا in Qur’anic verses آيات قُرآنية and poetry شِعر. 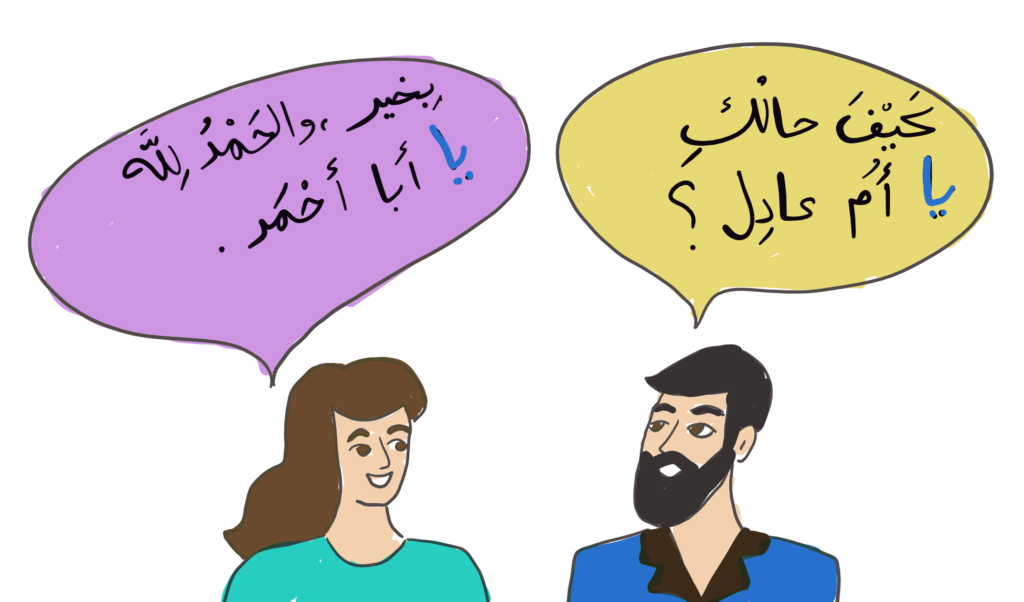 🎇The vocative in Arabic is called النِّداءُ to mean the act of calling someone which is derived from the verb (نادَى/يُنَادِي) which means “to call”. The term used for the noun being called is المُنادى.

You can find “the called noun” or المُنادى in the following forms:

Singular form مُفْرَد which could be a proper noun such as a name for example يا سليم or يا ليلى, or intended nouns without the definite article ال for example يا رَجُل or يا وَلَد. The called noun could also be in plural جَمْع and dual مُثَّنى forms for example, يا أطفال addressing children or يا رَجُلان addressing two men.

If the مُنادَى is prefixed with the definite article ال, than we add أَيُّها before the masculine noun and أَيَّتُها before the feminine noun whatever the number is (singular, dual, or plural).

Let’s read and listen to some examples. 🤓

Yusuf, do your homework.

Sister, what are you thinking about?

O you believers (example from the Quran)

Good morning, sir. Can I help you?

Oh girl, do not irritate your mother.

Oh God of all kinds. (example from the Quran)

How are you my friends?

Oh people, help each other.

I hope these examples helped you grasp the concept of using the vocative particle يا. Don’t hesitate to use it yourself when addressing other Arabic speakers. 😁

Till next week, happy Arabic learning! 🙂