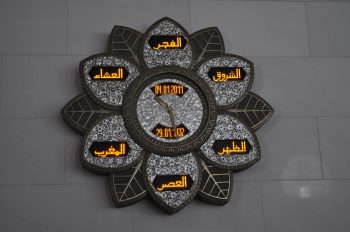 In today’s post, we’re going to learn about an important, everyday subject, that is time. Asking for the time and being able to tell the time is obviously useful for many reasons and it’s one of the basic skills for any language learner.

In order to learn this, I’ve attached a short video below where a group of kids are asking an old man ‘What the time is?’. The video is in Egyptian Colloquial Arabic or what is called المَصْرِيَّه العَامِيَّه Al-masriyy-ah Al-aamiyy-ah and the kids (as you can probably tell) are teasing the man and just joking with him.

As is usually the case, the concept of telling the time is closely related and based on numbers. Therefore, you need to have had learnt numbers before you can actually learn how to tell the time.

How to ask for the time:

In Arabic, it’s not ‘What’s the time’, but actually and literally ‘How much is the time’. So, this can tell you about how differently time is thought of, from an Arabic point of view. Time is thought of in terms of numbers/quantity.  As a result, the answer will be purely made up of numbers. The question word that expresses this notion is:

Kam is the alternative of the English word ‘how’ combined with the adverb ‘much’= ‘How much?’

And finally, here are some time-related phrases are listed here based on the order they appear in, in the video:

What’s the time, according to your watch?

Would you just tell him what time is?!

Come back after a little while (later)

In the next week post, we’ll learn how to tell the time, both in Standard and colloquial Arabic, see you later in few week for the second part!

About the Author: Hanan