10 Reasons Why Yangshuo is Still Awesome Posted by sasha on Mar 15, 2015 in Culture

Back in the 1980s, long-haired backpackers looking for rocks to climb on discovered the karst peaks of a small town called Yangshuo (阳朔 – yáng shuò) in the Zhuang autonomous region of Guangxi (广西壮族自治区 – guǎng xī zhuàng zú zì zhì qū). With no real tourism infrastructure in place, locals began housing the strange foreign visitors and a few entrepreneurial folks even set up shops, guest houses, restaurants, and bars. A few decades later, and this once sleepy town is one of the most popular destinations in all of China – not only for dreadlocked rock climbers but also packaged flag-following Chinese tourists. Many have bemoaned this change in Yangshuo and have written it off as a spot not worth of visiting on a backpacking trip. One travel blog I read even complained that the power lines in the countryside affected her pictures; sorry the fact that these people have electricity didn’t make for a good selfie. While the romantic notion of an undiscovered place is long gone, Yangshuo is still worth a visit and remains one of my favorite places I’ve traveled in China. Here are ten reasons why this town is still awesome:

1. It’s Easy to Escape the Crowds 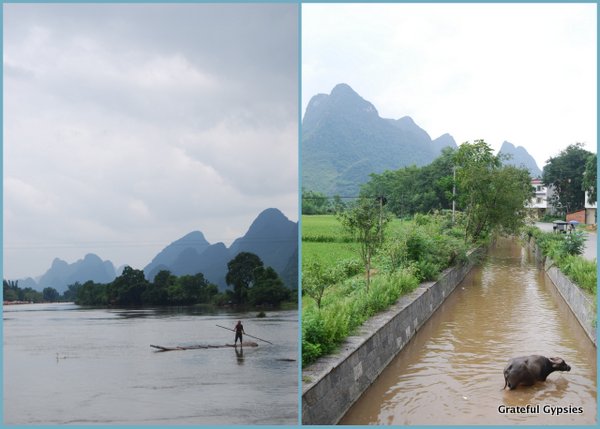 Fishermen and water buffalo out in the countryside.

While the town itself can be quite chaotic with the sheer mass of Chinese tourists, it’s really not hard to escape. Bicycles are for rent everywhere, and you can be out in the countryside surrounded by the majestic karst peaks in no time. Plus, Chinese tourists are generally quite lazy – they much prefer packing on to a tour bus than peddling a bike around in the hot sun. Check out some highlights from a day of cycling in Yangshuo here:

2. You Can Rent Motorbikes Now 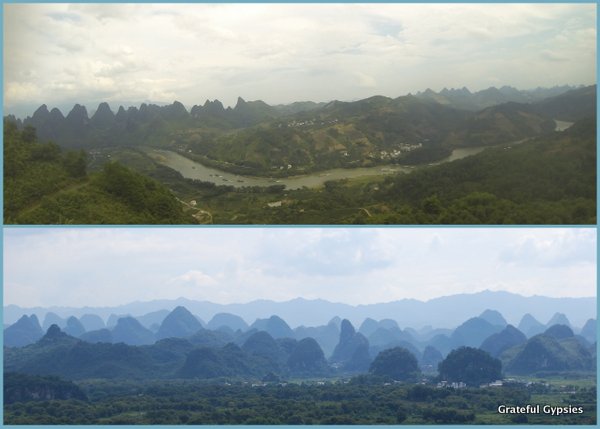 Get here much faster on a motorbike.

Cycling is great and all, but the area around Yangshuo is quite hilly making for an incredibly tiring day. That’s all changed, though, with the recent addition of motorbikes for rent. In my five years of living and traveling in China, I’ve never seen motorbikes for rent anywhere else. Spend an afternoon cruising around, stopping at some incredible viewpoints. 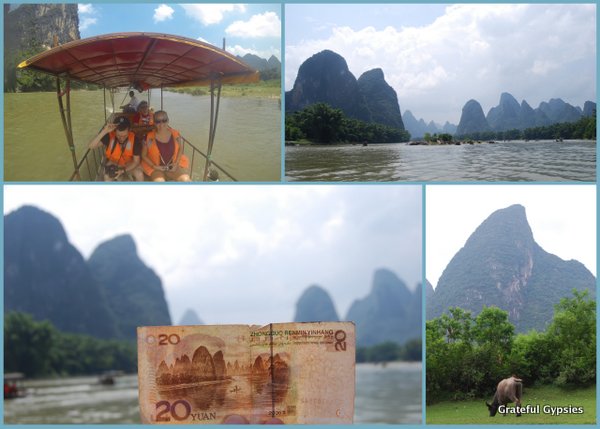 The scenery of the Li River (漓江 – lí jiāng) is so famous that they put it on the back of the 20 RMB note. Taking a cruise up the river on a bamboo raft is an experience not to be missed when traveling in China. Sure, there are plenty of other tourists around, but that doesn’t detract one bit from the natural beauty of this area. Just see for yourself: 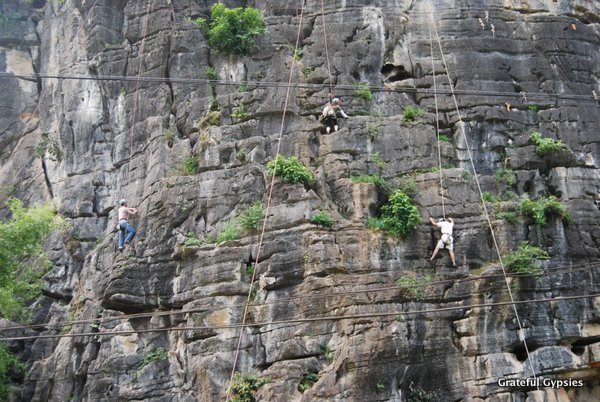 The sport that put this little town on the map decades ago is still huge in Yangshuo. There are plenty of options for rock climbing (攀岩 – pān yán), from half-day starter courses to epic multi-day trips. With over 300 routes of varying difficulties, there’s a lot to keep you busy if you’re into climbing. 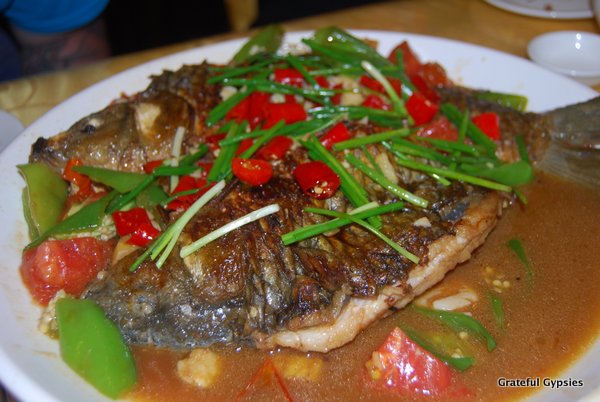 After working up an appetite cycling or rock climbing, you’ve got to try the local specialty of beer fish (啤酒鱼 – pí jiǔ yú). Choose your own fish from the tank and have it cooked up in a mixture of chillies and beer. Order up some side dishes and a bowl of rice, and you’ve got yourself one hell of a meal. 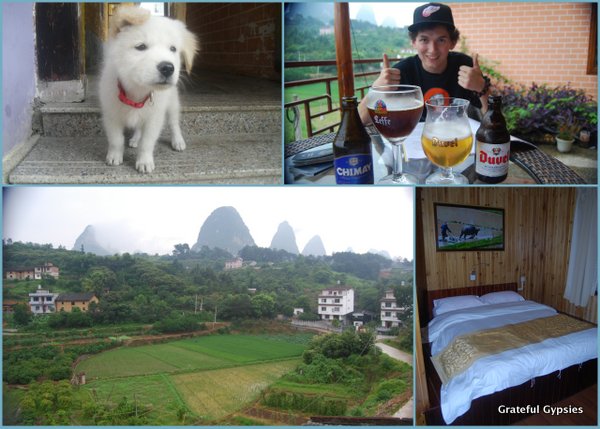 There’s no doubt that one of the reasons I love Yangshuo so much is because of the great hostel I’ve stayed at on both of my visits – Tripper’s Carpe Diem. Located a few kilometers outside of town, this is a great place to base yourself for exploring all that Yangshuo has to offer. It’s close enough to town – a nice 15-minute walk along the river – but far away enough to avoid all the noise and crowds. With a great rooftop bar/restaurant, delicious food, tasty Belgian beers, and the cutest dog ever, this is definitely in my Top 5 Chinese hostels. 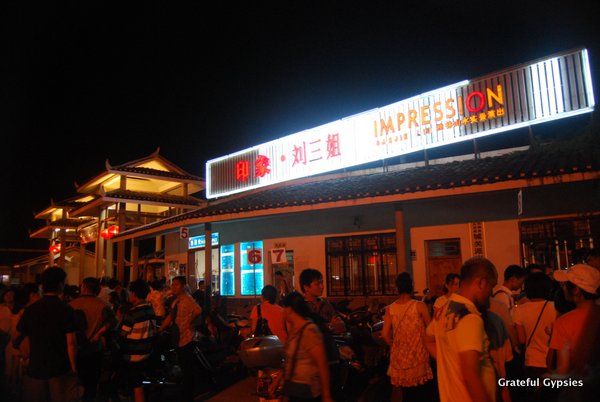 A show not to be missed.

Every night, you can catch the awe-inspiring Impression Liu Sanjie (印象刘三姐 – yìn xiàng liú sān jiě) performance in the world’s largest natural theater. Set on the river with the karst mountains as the backdrop, this epic show highlights the culture of the Zhuang people and features hundreds of local people. Of the three Impression shows in China (others are in Hangzhou and Lijiang), this one is far and away the best. Check out some highlights from the show: 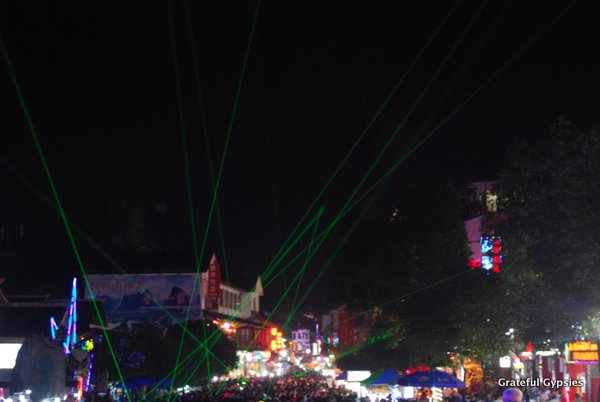 At night, the West Street (西街 – xī jiē) in the center of town comes alive and is illuminated in a sea of lazer pointers. It’s very “hot and noisy” (热闹 – rè nào – lit. “lively”) with hordes of tourists perusing the countless vendors, street performers, shops, and bars that line the street. 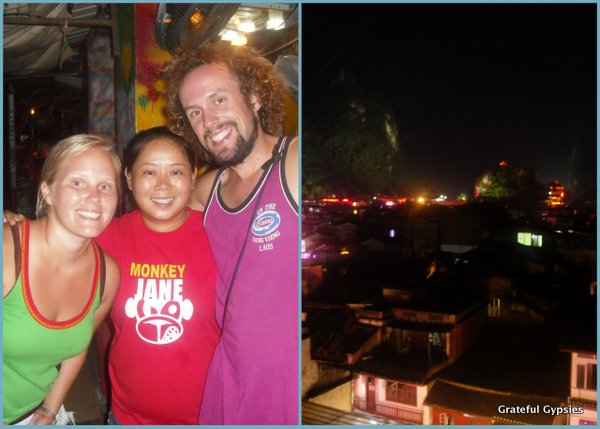 The Grateful Gypsies and the legendary Monkey Jane.

Taking a walk along West Street is fun, but going into the awful bars pumping out offensively loud music to hammered drunk Han Chinese men is not. If you’re looking to wet your whistle, head instead to one of the rooftop bars for cheap drinks and good times. From raging at the legendary Monkey Jane’s, to silly beach parties at Bad Panda, to a game of beer pong at Mojo, there are still plenty of great backpacker bars here. 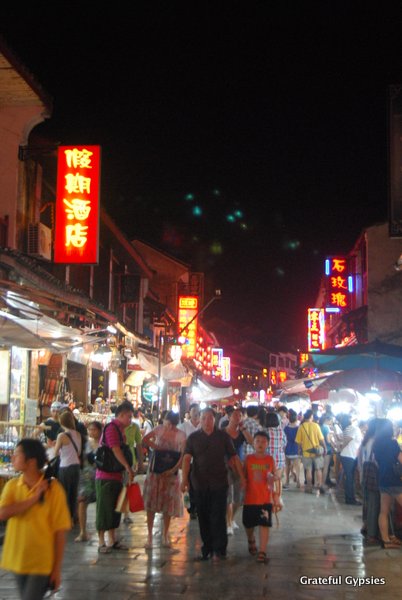 If you live in a big Chinese city as we do, you’re probably used to seeing Chinese people fighting for a seat on the subway, yelling at each other in traffic, and generally just being stressed out and irritable. That’s why traveling in Yangshuo is such a nice change of pace – the Chinese people you run into there are on vacation and are actually, dare I say it, enjoying themselves. Sure, they still travel en masse behind a flag-waving, megaphone yielding guide, but at least they’re letting loose a bit.

Sure, there are huge crowds of tourists in Yangshuo and it is very munch on the beaten path these days, but that doesn’t mean it’s not worth visiting. Based on that logic, would you also skip Beijing or Shanghai on a China trip? Probably not. Get yourself some wheels, base yourself outside of town, and party on the roof to ensure you still have an awesome time in Yangshuo. Check back to the blog in a few days for a “Streets, Beats & Eats” video tour brought to you by the Grateful Gypsies.