After checking out the City Wall, Big Wild Goose Pagoda, and Muslim Quarter in Xi’an, it’s time to head out to the most famous site here – the Terracotta Warriors. On the way out there, you might as well stop at another historical site. 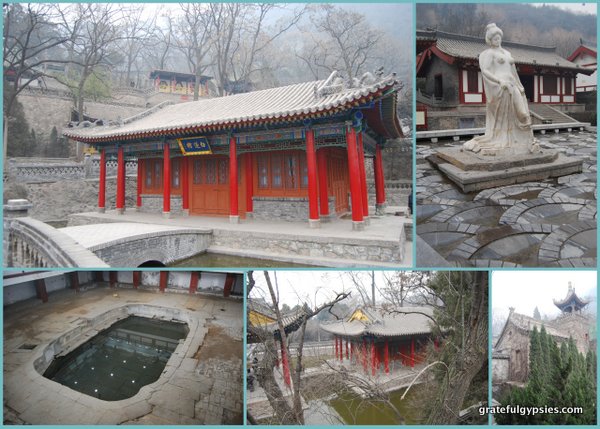 Along the way to the Terracotta Warriors, you could also stop at the Huaqing Hot Springs to make a day out of it. Built by the Emperor Xuanzong of the Tang Dynasty as part of the larger Huaqing Palace, it was a place where he could spend winters in the company of his favorite consort, Yang Guifei. There’s even a statue of her outside one of the springs. Sadly, the romance didn’t end well – thanks to her supposed role in a rebellion, she was strangled to death. 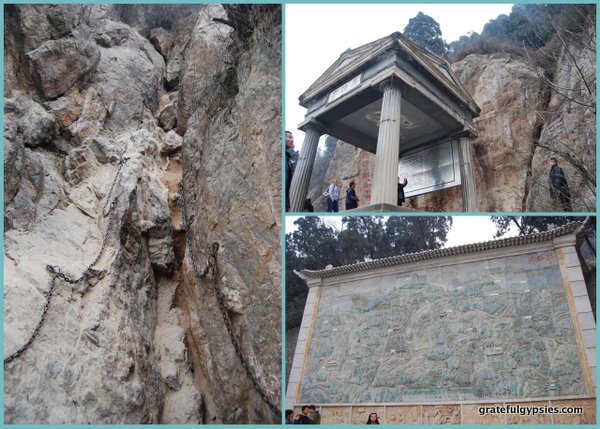 This was also the site of the 1936 Xi’an Incident (西安事變 – xī’ān shì biàn), which took place during the Chinese Civil War between the Kuomintang and the insurgent Chinese Communist Party. The leader of the KMT, Chiang Kai-shek, was caught by Zhang Xueliang, a former warlord. This led to a temporary truce between the two sides to form a united front against Japan. 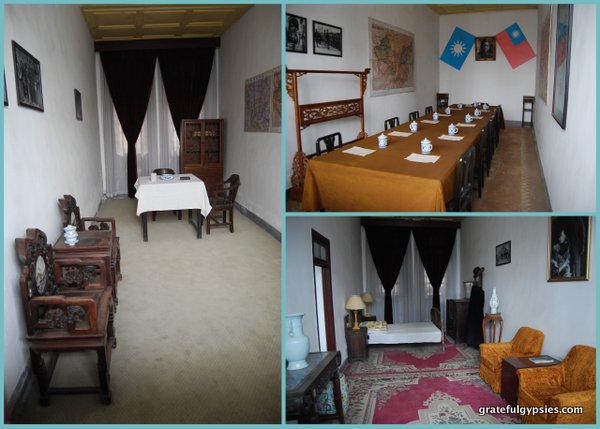 Ultimately, the two sides would resume their battle after the defeat of Japan in 1945. The Xi’an Incident helped to strengthen the Communist Party, who would go on to drive the KMT out and establish the new People’s Republic of China in 1949. 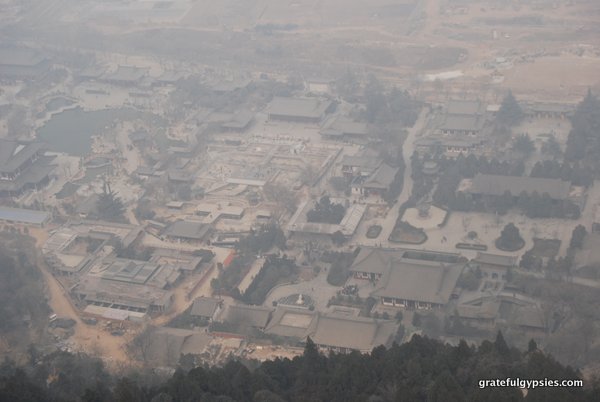 It’s down there, somewhere…

You can also take a cable car out here to take in the views from above. In smog-choked Shaanxi, though, don’t be surprised if the views aren’t that impressive. 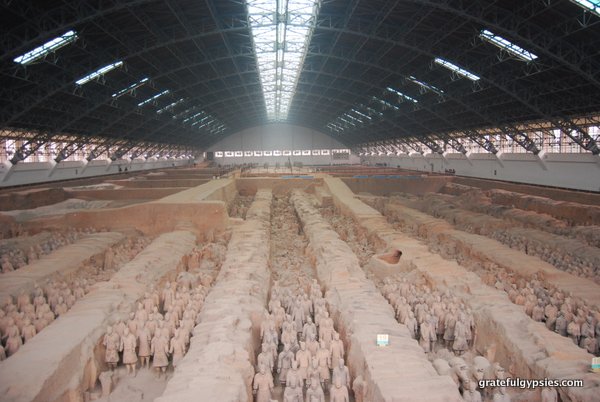 This is not only the most famous site in Xi’an, but it’s one of the most famous in the entire country. One of the most incredible archeological discoveries of the 20th century, it was stumbled upon by farmers who were digging a well in 1974. While digging, they found a life-sized clay soldier poised for battle. Government archaeologists were soon on site, and they quickly realized there were actually thousands of them. 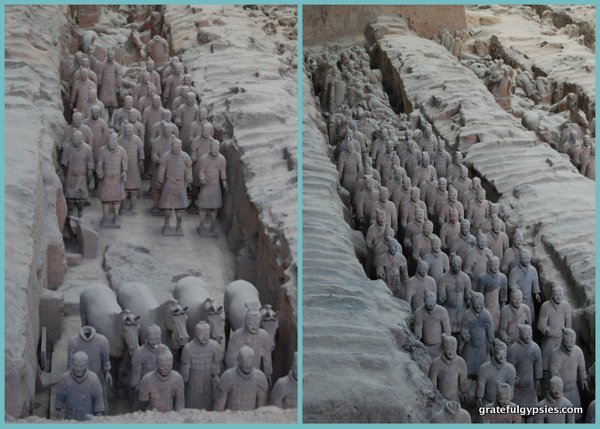 Some of the many statues.

These thousands of statues were buried with the first emperor of China in 210-209 BCE. He was born Ying Zheng (嬴政), and he became the King of Qin at just 13 in the year 246 BCE. By 221, he had managed to unify the collection of Warring States. Rather than continue using the title of king, he called himself the First Emperor of Qin (秦始皇帝 – qín shǐ huáng dì). During his reign, the Chinese state expanded greatly. He standardized weights, measures, and currency to unify the country economically. To enhance the country’s defense, he also ordered the construction of a massive defensive wall, a precursor to the Great Wall of China. 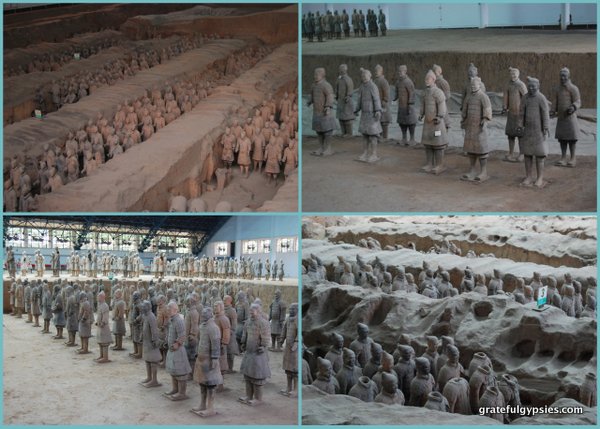 Some of the many thousands of figures.

Shortly after taking the throne, he was already thinking about death. He was obsessed with immortality, and tried desperately to find the fabled elixir of life that would provide it. Concerned with his afterlife, he ordered construction of a massive mausoleum. It is said to have taken 700,000 workers and craftsmen 38 years to finish the project. 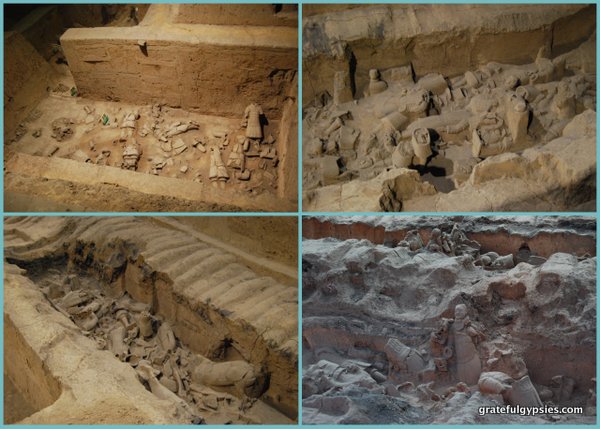 Many of the figures have not been put back together.

The figures include warriors, chariots, and horses, representing his army that triumphed over the other Warring States to unify China. Just as they did during his life, the purpose of this massive army was to protect him in the afterlife. Each figure has distinctive features and expressions, leading many to believe they were modeled on real soldiers. The mausoleum was listed as a UNESCO World Heritage site in 1987, with the description hailing the statues as “masterpieces of realism and also of great historical interest.” 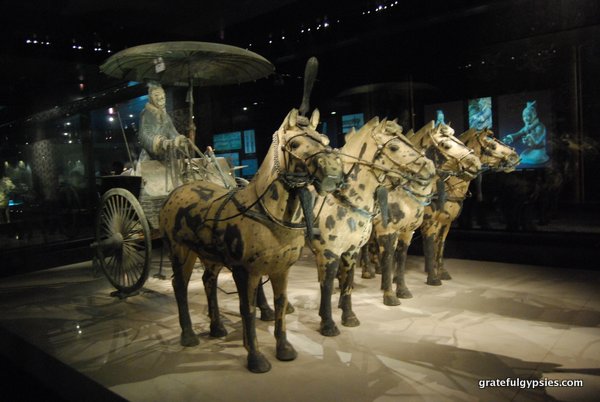 A chariot on display at the site.

Many decades after the discovery, Qin’s tomb has yet to be excavated. According to the writings of Siam Qian – a court historian during the Han dynasty – “The tomb was filled with models of palaces, pavilions and offices as well as fine vessels, precious stones and rarities.” It is also said that streams of mercury were inlaid in the floor to simulate local rivers running through the tomb. Modern tests have actually revealed high concentrations of mercury in the tomb, so these ancient accounts just may be true. For now at least, the emperor continues to rest in peace.

A video from UNESCO/NHK about the Terracotta Warriors.

With one of the most famous and historical sites in the country, an impressive City Wall, delicious cuisine, and much more, Xi’an is a city that should be high on your list if traveling to China. As you can see, there’s quite a lot you can see and do there, even with just 48 hours. Have you ever been to Xi’an? What did you think of the city and its sites? Leave a comment and let us know.