While traveling in China can be an incredible experience, getting a visa is not. Thankfully, several Chinese cities now offer 72-hour visa-free visits. With three full days to explore, there’s plenty you can do. We’ve already taken a look at what you can do with a visa-free trip to Beijing and Kunming. Next up, we’re spending 72 hours in Chengdu. 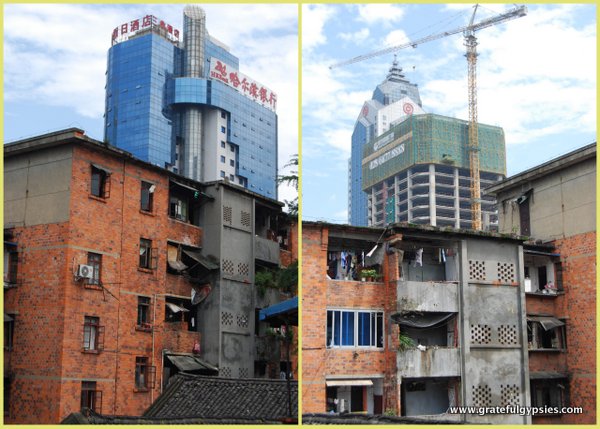 Out with the old, in with the new.

This provincial capital is famous for its cute giant pandas and its mouth-numbing cuisine. As of the most recent census in 2010, the city is home to just over 14 million people. It’s even more if you’re counting the entire metro area, making Chengdu one of the biggest and fastest growing cities in China. Despite its growth, the city is known to have a more laid-back feel than many of its counterparts. There’s a lot to see and do here, so you can certainly pack quite a bit into three days. Our first day in Chengdu includes a stroll through the square and a park, some tasty local food, and a little sampling of the nightlife. 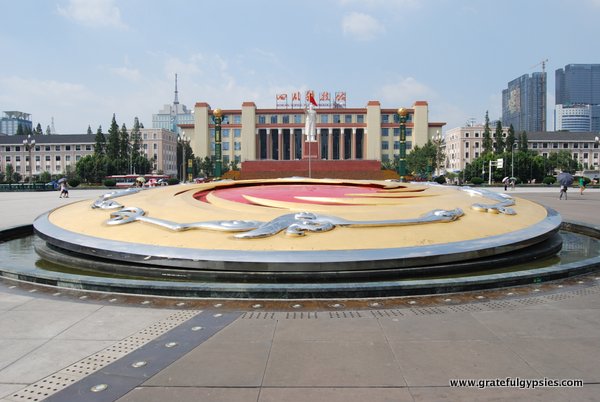 Our trip here starts out at Tianfu Square (天府广场 – tiān fǔ guǎng chǎng). This massive square is right above the hub where Chengdu’s two subway lines meet, so it’s a logical place to start your exploration. Upon entering the square, look around in awe at the sheer number of skyscrapers that have been recently built or are currently under construction. 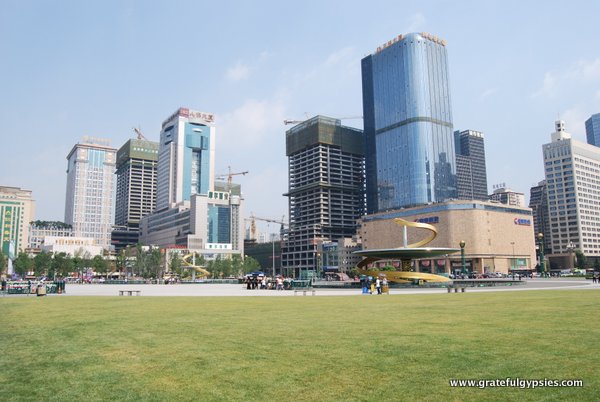 Around the square, there are a few interesting statues you can check out, as well as plenty of places to sit and enjoy some people watching. If you come back in the evening, you can see the musical fountain – a popular attraction for locals and tourists alike. 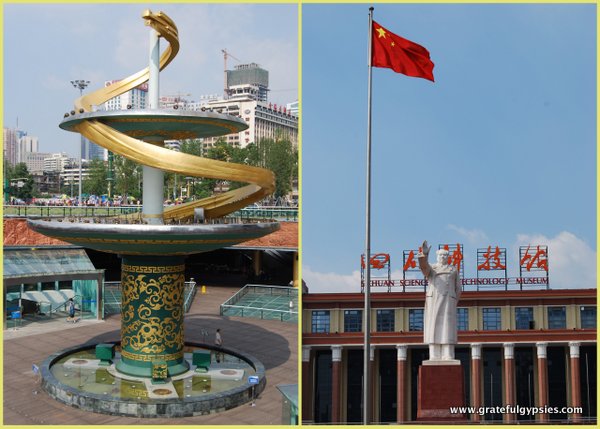 Just outside the square, you’ll find the Sichuan Science and Technology Museum (四川科技馆 – sì chuān kē jì guǎn). Right in front of the museum is a giant statue of Chairman Mao, looking out over the square and waving right at you. There are also shopping malls, art galleries, and plenty of places to eat and drink around here. 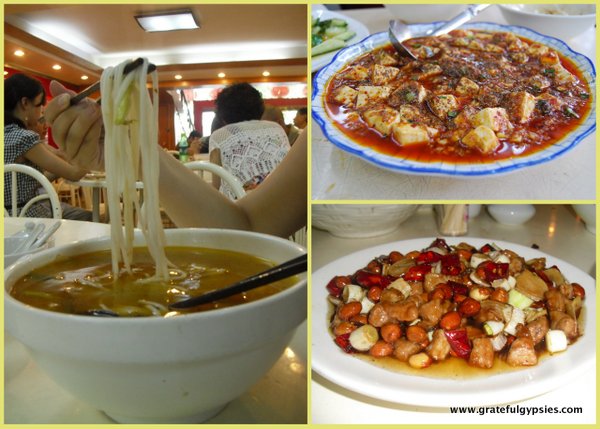 Speaking of food, some of the best food in China comes from this province. As a matter of fact, it makes the cut on the exclusive list of China’s four great culinary traditions (四大菜系 – sì dà cài xì). You’ve probably seen dishes labeled as “Szechuan” on the menu before, which is just another way to spell it. Sichuan cuisine is famed for its numb and spicy (麻辣 – má là) flavor. Order up some Mapo Tofu (麻婆豆腐 – má pó dòu fu) to give it a try, along with a tasty bowl of Dan Dan Noodles (担担面 – dàn dàn miàn). 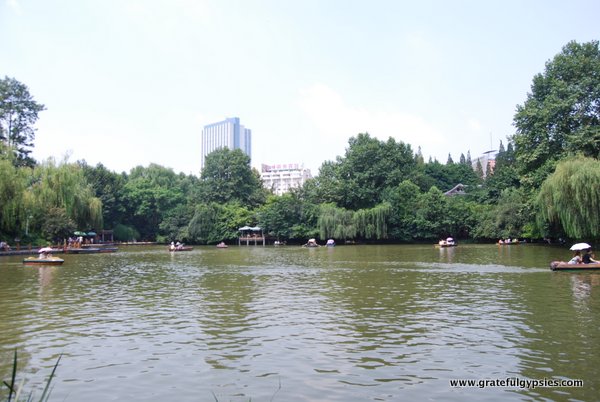 A great oasis in the big city.

If you want to escape the concrete jungle and experience the local culture, look no further than the People’s Park (人民公园 – rén mín gōng yuán). Spend a few hours here and you’ll see why Chengdu people are known to be very easy-going and fun. 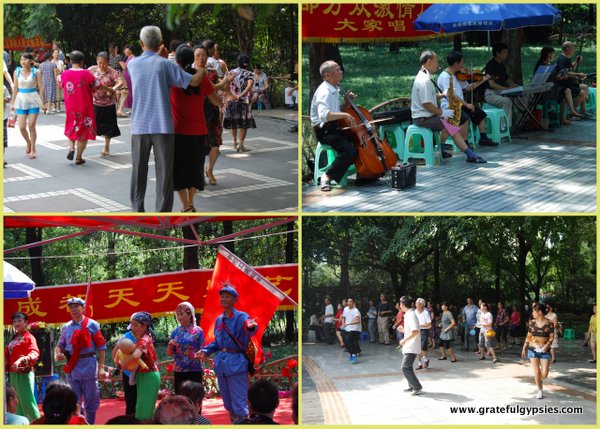 Bust a move and jam out!

No matter what day it is, you’ll find plenty of people here enjoying life. Some sip tea and play mahjong (麻将 – má jiàng), while others join in a group dance or have band practice. You’ll also see people practicing water calligraphy, acting out a traditional play, or cruising paddle boats around the small lake. Go ahead and sit down for a cup of tea and relax for a while – it’s the Chengdu way!

A Bit of Nightlife 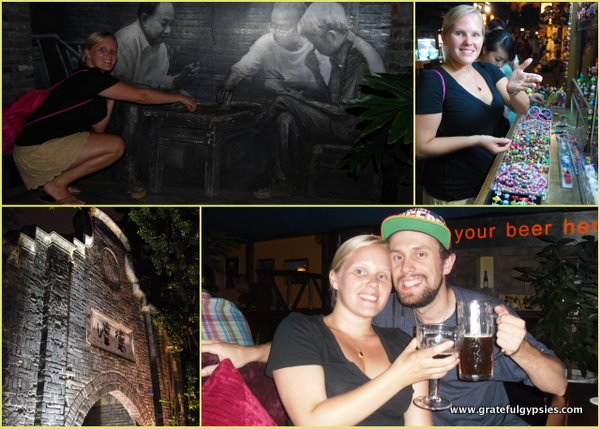 After your busy day, spend your first night in Chengdu going for a leisurely stroll around the Wide and Narrow Alleys (宽窄巷子 – kuān zhǎi xiàng zi). These ancient streets originally date back to the Qing Dynasty and were renovated in the early aughts to bring in more visitors. Here you’ll find plenty of shops, restaurants, bars, and street food vendors. There’s also a wide array of statues and paintings depicting the city’s history and culture. It’s a bit touristy, but it’s a pleasant enough place to spend an evening.

That does it for Day One in Chengdu. Still to come is a visit to the Giant Panda Research Base, a performance of Sichuan Opera, some super spicy hot pot, and so much more!