A Walk Around Beijing’s Lakes Posted by sasha on May 16, 2018 in Culture

Spring is here and it’s one of the best times of the year to get outside in Beijing. Winter in the city can be downright painful. It’s cold, dry, and often very windy. Summer is a totally different extreme. It can be stifling hot and super muggy. Spring is quite pleasant, though, making it a great time to go out and explore the city. One of your best options for enjoying the outdoors is taking a walk around Beijing’s lakes.

Once an imperial garden, Beihai Park (北海公园 – běi hǎi gōng yuán) is now a public park in the heart of Beijing. Bei Hai literally means Northern Sea. There’s also a Central Sea (中海 – zhōng hǎi) and Southern Sea (南海 – nán hǎi). These two are now part of the massive complex known as Zhongnanhai (中南海 – zhōng nán hǎi), which is the headquarters of the Communist Party and State Council of China. Obviously, these lakes are not open to the public. 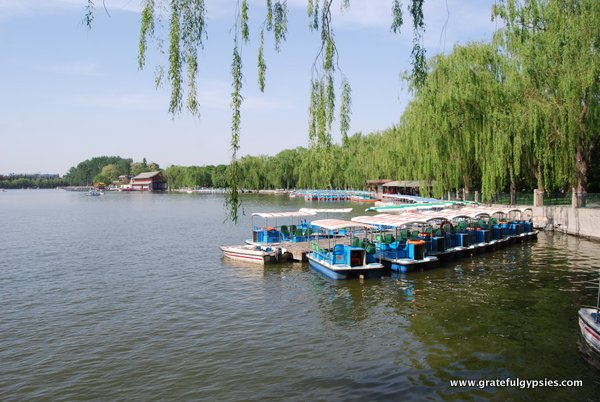 While you won’t be able to stroll around the southern or central lakes, the northern one is open year-round. Beihai Park is one of the largest Chinese gardens, covering about 170 acres. It’s also one of the oldest, as it was created way back 1150. As with many imperial gardens in China, much of its design was based on other scenic areas around the country. 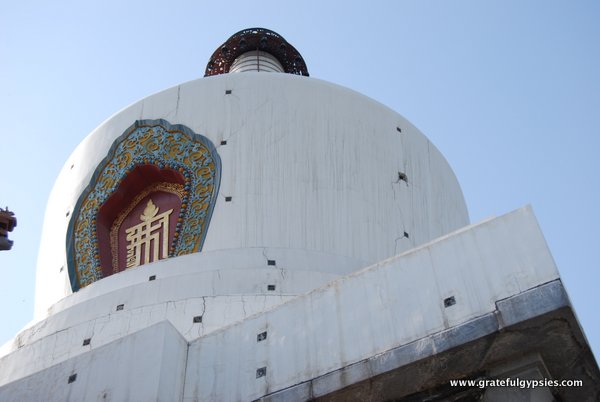 Most of the park is taken up by a large lake with the Jade Flower Island (琼华岛; – qióng huá dǎo) in the middle. One the island, you’ll find the White Dagoba (白塔 – bái tǎ). This 40-meter high stupa was built in 1651 from white stone. It’s a Buddhist structure that was built to honor the visiting 5th Dalai Lama. There are actually believed to be sacred Buddhist relics inside the White Dagoba. 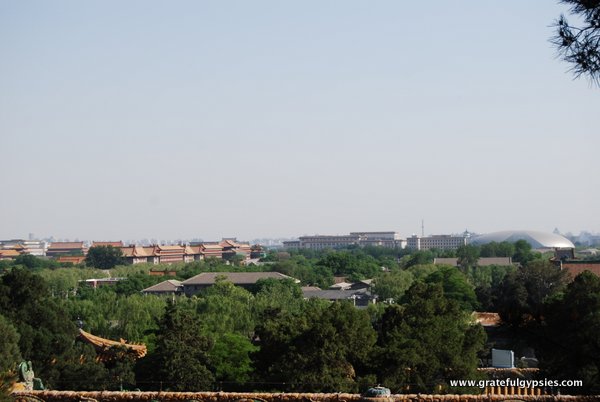 Some of the best views in Beijing!

It’s well worth the short hike up to the White Dagoba to enjoy the panoramic views of the park and the cityscape. Thanks to the strong winds of spring, it’s more likely you’ll be able to enjoy a clear day up here. The view really isn’t that nice on one of Beijing’s awful pollution days.

Another highlight of Beihai is the Nine Dragon Screen (九龙壁 – jiǔ lóng bì). As the name would suggest, this screen wall depicts nine Chinese dragons. There are only two other such screens found in China – one next door in the Forbidden City and the other in Datong. 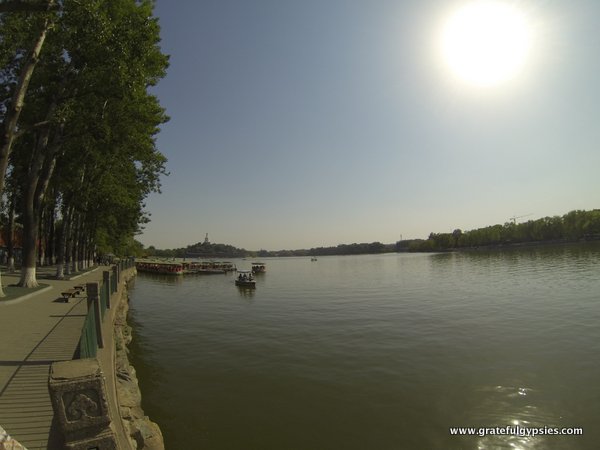 A great place to chill.

In addition to visiting all the historical sites, Beihai Park is a great place to just relax. There are little paddle and electric boats you can rent by the hour to cruise around the lake. As with most local parks in China, you’ll always find people here practicing tai chi, taking part in some group dance, doing water calligraphy, or just playing chess and sipping tea. From this very traditional place, we head just across the street to a more modern side of China. 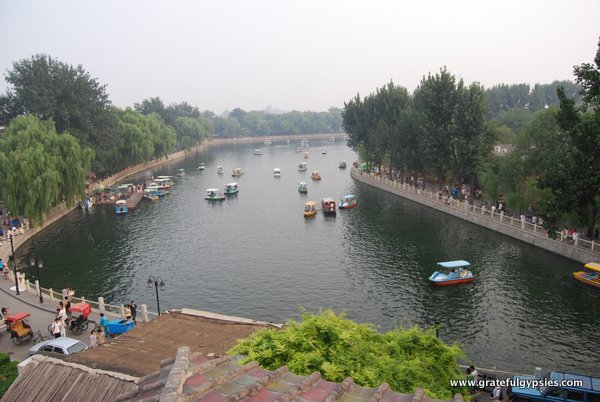 Walking out of Beihai’s north entrance, you’ll find yourself at Shichahai (什刹海 – shí chà hǎi). This scenic area is composed of three more lakes – Qianhai (前海 – qián hǎi), Houhai (后海 – hòu hǎi), and Xihai (西海 – xī hǎi). These are the Front Lake, Back Lake, and West Lake, respectively. This is a fascinating and fun part of Beijing to explore, as there’s lots to see, do, eat, and drink. 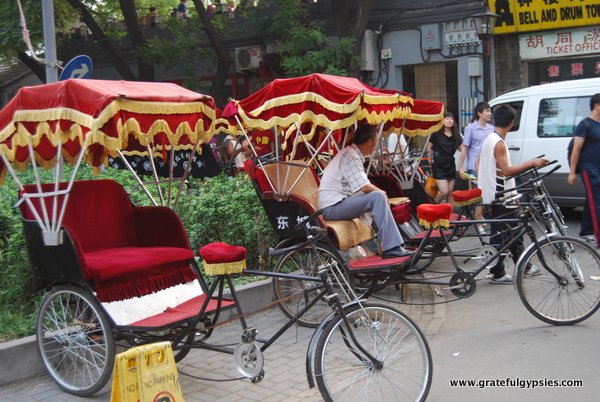 You’ve got several choices for getting around the three lakes. You can walk, rent a bicycle, hire a rickshaw, or get a boat. However you choose to get around, Shichahai is a great place to spend a leisurely day in Beijing. When the ice has finally melted after that long winter, it’s the perfect time to get out there and enjoy Shichahai.

While making your way around the lakes, it’s easy to tuck into some of Beijing’s traditional alleyways known as hutong (胡同 – hú tòng). In the hutongs, you’ll find plenty of snack and drink vendors. You could easily spend an entire afternoon just sampling different snacks. 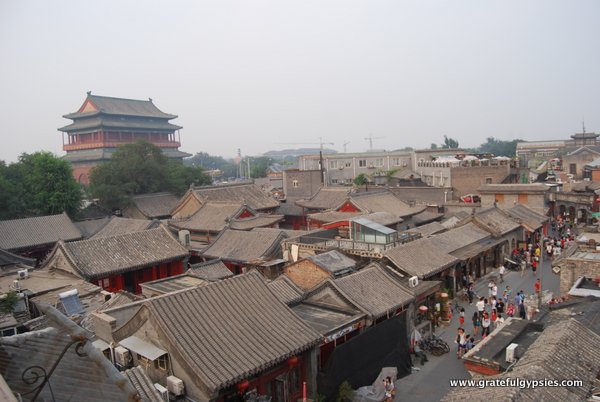 There are a few places of interest around these lakes as well, including the Prince Gong Mansion (恭王府 – gōng wáng fǔ). It’s said to be one of the best-preserved and most beautiful imperial mansions in Beijing. Unfortunately, in my 5 years of living in Beijing and countless trips to the area, I never actually made it inside the mansion. I was too busy having fun. Which brings me to our next point… 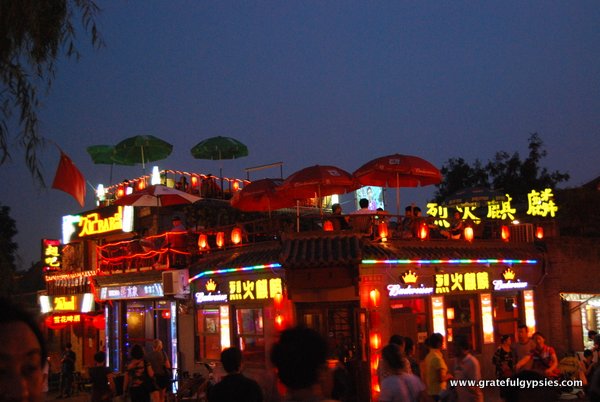 These days, the Shichahai area is a well-known hotspot for dining and nightlife. Once the sun goes down, the neon comes up here as the various restaurants and bars that surround the lakes compete for your attention (and RMB, of course). It’s painfully noisy as well, as they all blast their music far louder than it needs to be. Thankfully it’s still possible to find places that take a more laid back approach. My friends run an awesome restaurant and bar called 4corners that’s tucked away in a hutong just a few minutes away from Houhai. It was one of my favorite places to hang out when I lived in Beijing and somewhere I’d highly recommend you check out if visiting.

Taking a walk around Beijing’s lakes is an excellent way to spend a day in the Chinese capital. You can visit many historical sites, get immersed in the local culture, enjoy a bit of nature in an otherwise concrete jungle, and find plenty of places to eat and drink along the way. If you’re headed to Beijing, be sure to include a loop around the lakes in your plans.