Acupuncture (针灸) Posted by Stephen on Jan 15, 2012 in Uncategorized 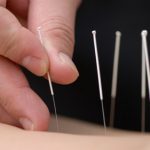 Acupuncture or 针灸 (zhēnjiǔ) is one of the the most popular forms of Chinese Traditional Medicine in the mainland, and is well recognized and practiced abroad (even by Western doctors). Acupuncture treats patients by the insertion and manipulation of needles in the body, in an attempt to balance the body’s qi. Acupuncture proponents claim that the practice relieves pain, treats infertility, prevents disease, promotes general health, or can be used for therapeutic purposes.

Acupuncture uses pressure points or 穴位 (xuéwèi), otherwise known as “meridian points”  to achieve this, focusing on specific pressure points that regulate balance and harmony within a patients body. Click here for a previous post on Chinese Medicine Theory. 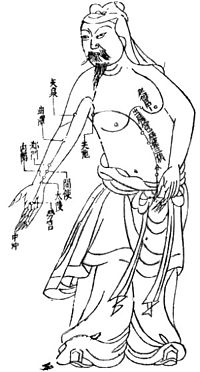 An Acupuncture Chart From the Ming Dynasty

Acupuncture’s origins in China are somewhat unknown and mystical. The most popular explanation for the birth of acupuncture is that soldiers wounded in battle by arrows were believed to have been cured of chronic afflictions that were otherwise untreated by riddling their bodies with needles and knives. Sharpened stones known as Bian shi have been found in China, suggesting the practice may date to the Neolithic or possibly even earlier in the Stone Age. Even hieroglyphs and pictographs have been found dating as far back as the Shang Dynasty (1600–1100 BCE), suggesting that acupuncture was practiced alongside moxibustion. This places acupuncture among one of the oldest practices of medicine.

It wasn’t until the 2nd century BCE (during the Han Dynasty) that stone and bone needles were replaced with metal ones. The earliest records of acupuncture is in the Shiji (史記, or  Records of the Grand Historian) with references in later medical texts. Further, the earliest Chinese medical text to describe acupuncture is the Huangdi Neijing, the legendary Yellow Emperor’s Classic of Internal Medicine (History of Acupuncture) which was compiled around 305–204 BCE.

Around ninety works on acupuncture were written in China between the Han Dynasty and the Song Dynasty, and the Emperor Renzong of Song, in 1023, ordered the production of a bronze statuette depicting the meridians and acupuncture points then in use (see chart below). However, after the end of the Song Dynasty, acupuncture and its practitioners began to be seen as a technical rather than scholarly profession. It became more rare in the following centuries, supplanted by medications, and became associated with the less prestigious practices of shamanism, midwifery and moxibustion.

Check out a video of Auricular Acupuncture:

In the years following the Chinese Civil War, Chinese Communist Party leaders ridiculed traditional Chinese medicine, including acupuncture, as superstitious, irrational and backward, claiming that it conflicted with the Party’s dedication to science as the way of progress.  Chairman Mao Zedong (毛泽东), recognizing the value of acupuncture, later reversed this position, declaring that “Chinese medicine and pharmacology are a great treasure house and efforts should be made to explore them and raise them to a higher level”. Since then modern practice of acupuncture has taken off both in the mainland and throughout the globe.