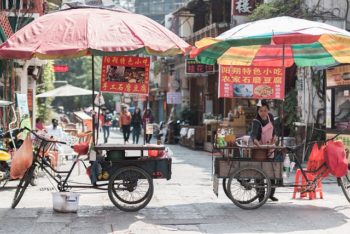 Photo by Real-ice from Pixabay, CCO

Cixi (1835-1908) was the queen regent of the Qing Dynasty and known as the empress dowager of China. She started as one of the emperor’s low-ranking concubines. She gave birth to his first son, and after the emperor death she seized power and ruled over the Chinese empire for almost half a century.

According to legend, she left the palace one hot summer day, trying to cool down in the fresh air. She was sitting in Beihai Park – currently a public park, but back then an imperial garden located in the northern part of the Imperial City, Beijing. She suddenly heard a peddler (小贩 xiǎo fàn) shouting in the street. She asked to bring him in, and tasted (尝 cháng) his product – yellow pea cake (豌豆黄 wān dòu huáng).

Cixi ate and laughed. She enjoyed the sweet refreshing (香甜爽口 xiāng tián shuǎng kǒu) treat so much, she asked the man to stay in the palace to make these cakes for her. A shout outside the imperial garden brought a touch of the common people into the palace, changed the man’s destiny, and made the Beijing snack (小吃 xiǎo chī) nationally famous.

Yellow pea cake was originally a snack of the common people, but it became famous as Cixi’s favorite food.

The sweet yellow refreshing dessert (甜点 tián diǎn), made of pea – hence its name, was improved by the imperial dining room of the Qing palace. To top the imperial banquet the imperial kitchen used refined preparation methods and made the local snack fine and exquisite (细腻 xì nì).

Yellow pea cake is light yellow in color, has a sweet taste and melts in the mouth.

It is known as the empress’s favorite food (食品 shí pǐn), but can be made in any kitchen. The ingredients are simple, and you can even use green peas if you like. It should be refrigerated for several hours before plating it, and served cool and delicious (清凉可口 qīng liáng kĕ kŏu). Therefore, it is a seasonal product, usually seen in Beijing temples fairs during the spring and the summer.

Yellow pea cake is a seasonal food in spring.

Use the recipe in the next video to make the Beijing snack at home: