Better Know a… Municipality (Part One) Posted by sasha on Jul 3, 2012 in Culture, Uncategorized

In a new series here on the Transparent Chinese blog, we’ll be diving deeper into China by examining the various regions of this massive country, one by one. In a nod to Stephen Colbert and his “Better Know a District” segment, we’ll be looking closely at each region and introducing some basic facts and interesting information. The country known officially as the People’s Republic of China is composed of 22 provinces (or 23, depending on who you ask…), five autonomous regions, four municipalities, and two special administrative regions. That’s a whole lot to cover, but thankfully we’re up to the task. Each month we’ll discuss a few, so keep an eye on the blog for the next year or two, and we’ll make our way through this fascinating country together!

For the first post, we’ll start with the place where I currently call home – the capital of China – Beijing. The entire metropolitan area is known as the Municipality of Beijing (北京市 – běi jīng shì), and it’s one of the most populous cities in the entire world. As one of the Four Great Ancient Capitals of China, the current capital (since 1949), and the political, cultural, and educational center of the country, this is a pretty good place to start.

To say that Beijing has a long history simply doesn’t do it justice. The Peking Man (北京猿人 – běi jīng yuán rén) and other homo erectus lived out in the caves around Beijing hundreds of thousands of years ago, and Paleolithic homo sapiens called Beijing home nearly 30,000 years ago. Later on, Beijing was the capital of the State of Ji (蓟国 – Jì guó) from the 11th to 7th century BC. Way back then, the place was called Jicheng (蓟城 – jì chéng –  lit. City of Ji), and throughout the centuries it would serve as the capital city of various dynasties, including: Liao, Jin, Yuan, Ming, and Qing. Over that time, the city was called by many different names. The first time the name Beijing came into the lexicon was in 1403, when the Yongle Emperor chose this name, which can be translated as “northern capital.” The city would survive through the end of Imperial China and many years of bloody civil war, until Mao Zedong proclaimed the founding of the PRC on October 1, 1949. Once again, it became Beijing, the capital of China, as it remains to this day.

Beijing is located in northern China, and is for the most part surrounded by Hebei province. It’s composed of 14 urban and suburban districts, as well as two rural counties. Although the city itself lies on flat land, Beijing municipality on a whole is quite mountainous. To the west lie the Western Hills (西山 – xī shān), and to the north Yanshan (燕山 – yàn shān). These two mountain ranges meet in the northwest part of the city, creating a huge fault line and rift valley. In addition to mountains, Beijing also has water – a few small lakes in the city center and big reservoirs out in the countryside.

Map of Beijing's many districts and counties.

Nobody moves to Beijing for the great weather, that’s for sure. Hot, humid summer gives way to a pleasant, albeit short autumn. Then it’s a long, cold, windy, and incredibly dry winter that seems to last forever. A few short weeks of comfortable weather return during spring, but you may find yourself caught in sandstorms (风沙 – fēng shā) coming in from the Mongolian steppe. It really seems as if Beijing only has two seasons – hot and cold. 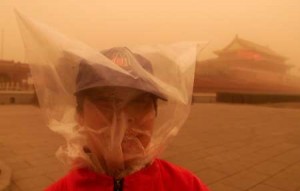 That's one way to hide from the sandstorms... 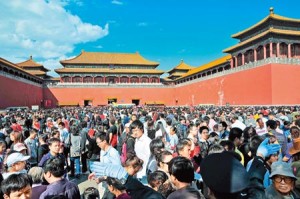 In the 2010 census, the population of Beijing reached nearly 20 million. Keep in mind, this is only counting people with official hukou permits (户口 – hù kǒu) or temporary residence permits. There are plenty of migrant workers and random foreigners currently calling Beijing home who are not counted in official census numbers. In terms of the Chinese population, it should come as no surprise that about 96% of Beijingers are Han (汉族 – hàn zú), with a small percentage of ethnic minorities such as the Hui, Manchus, and Mongols. There are plenty of foreigners in Beijing, either working in embassies or multinational companies, or studying Chinese. As far as foreigners go, there are more Koreans (韩国人 – hán guó rén) than anybody else. 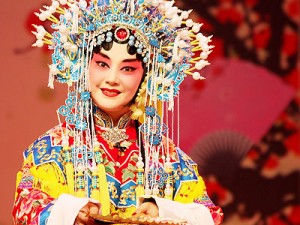 Elaborate costumes are a big part of Beijing opera.

When it comes to Beijing culture, a few things come to mind – language, music, and food. As far as the language goes, you’ll hear the Beijing dialect (北京话 – běi jīng huà) in the capital. Although it’s basically standard Mandarin (普通话 – pǔ tōng huà), the Beijing dialect tends to add an “r” sound to the end of most words. For example, when you get in a cab, the driver will ask you, “Where are you going?” (去哪儿？ – qù nǎ’er). As for music, the capital is famous for Beijing opera (京剧 – jīng jù), which is known as one of the cultural treasures of China. Finally, we can’t talk about Beijing culture without mentioning the legendary Beijing roast duck (北京烤鸭 – běi jīng kǎo yā). This crispy bird was a favorite amongst Chinese Emperors, and for good reason. If you’re traveling through Beijing, a stop in a roast duck restaurant will certainly be high on your list.

A UNESCO video about Beijing opera.

As the capital of China and a city with thousands of years of history, there’s plenty to see in Beijing. Tour groups from all over China and the world stream into the city every day to take in the sights. Of course, the most famous place in Beijing is the Great Wall (长城 – cháng chéng), and several sections of the famed wall are accessible by bus or car from the city center. Other than the wall, there are also many places to visit in the city, such as: the Forbidden City (故宫 – gù gōng), the Summer Palace (颐和园 – yí hé yuán), and the Temple of Heaven (天坛 – tiān tán). As someone who has lived in Beijing for almost three years, I’d advise anyone planning a visit to this fine city to schedule at least a week, if possible; there’s just so much to do and see here in this massive sprawling metropolis, so don’t sell it short by only giving it a few days.

Take a tour of Beijing’s famous places with this short video.

Well that’s it for the first part of our new series. Check back for more posts exploring the various regions of China in the future. In the meantime, cruise over to the Transparent Chinese page for plenty of resources to help you learn Chinese.