The Er Hu belongs to a series of Chinese instruments known as the Huqin (胡琴 – hú qín). These instruments all have two strings (with the exception of the Si Hu, which has four), and a soundbox at the bottom of the neck covered in snakeskin or thin wood. We’ll start with the most famous – the Er Hu. 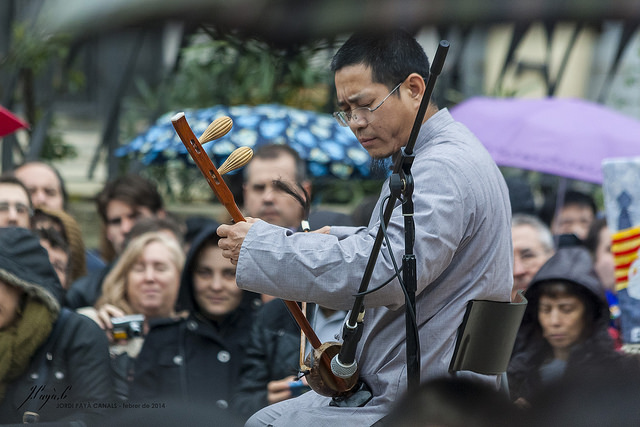 The Er Hu is often called the “Chinese violin,” and it’s perhaps the most common traditional instrument in the country. It’s definitely the most popular of the huqin instruments. All across the country, you’ll hear people playing it in parks and train stations. The Er Hu has a history going back more than a thousand years. Its design consists of a long stick-like neck, with two large tuning pegs stretching two strings to the top. The simple design is also what makes it such a unique instrument. The Er Hu’s characteristic sound is produced through the vibration of the python skin (covering the base of the violin). There is also no fingerboard as the player applies light pressure onto the strings without the strings ever touching the neck.

Take a closer look at the Er Hu in this great video.

While the Zhong Hu has that low, alto sound, the Gao Hu has a higher pitch, as it is tuned a fourth to a fifth higher than the Er Hu. Also, the neck is shorter and the soundbox smaller than its more famous musical cousin. While most Hu Qin are placed on the left thigh, the Gao Hu is held in between the knees. It is used primarily in Cantonese music and opera. Actually, the modern day Gao Hu was developed by Lv Wencheng (吕文成 – Lǚ wén chéng), a Chinese composer and musician who was known as a master of Cantonese music (广东音乐 – guǎng dōng yīn yuè). One of his compositions, Autumn Moon Over Calm Lake (平湖秋月 – píng hú qiū yuè) was written in the 1930s and remains popular to this day.

Autumn Moon Over Calm Lake performance, including the Gao Hu.

Image by Thomas Quine from flickr.com. Attribution 2.0 Generic (CC BY 2.0)

Finally, let’s check out the Ge Hu, which is a fusion between the Chinese Hu Qin instruments and the cello. In its name, the character 革 means “revolutionary,” and that it is. This instrument comes in two sizes, the big Ge Hu (大革胡 – dà gé hú) and the bass Ge Hu (低音革胡 – dī yīn gé hú). In a Chinese orchestra, they take on the same role as the cello and the double bass in their Western counterpart. While most traditional Chinese instruments are high-pitched and nasal, the Ge Hu was created to provide a full and low-pitched sound, thus enlarging the scope of Chinese music. It has four strings tuned exactly like those of a cello (C-G-D-A). Although this instrument is very similar to the cello, they sound completely different. Sadly, many Chinese orchestras these days prefer using the cello and double bass in favor of the Ge Hu. Let’s hope that this unique and traditional Chinese instrument manages to stick around. Who knows, maybe some day it will make its way into Western orchestras.

We’ve got more Chinese music to come on the blog, including bamboo instruments such as the Chinese flute known as the xiao.