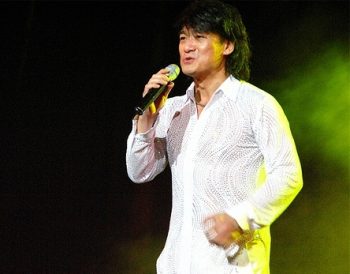 周华健 (Zhōuhuájiàn) is a famous Chinese singer (also known by the names Wakin Chau, or Emil Chau). He has sung professionally for more than three decades, in several languages, and is quite popular in China, Taiwan, Hong Kong, Singapore and Malaysia.

华健’s clear voice and romantic songs gained him fans of all ages from diverse countries. His gentle vocals and warm appearance maintain his positive image in mainland China and outside its borders.

Zhou Huajian is a Chinese pop singer, musician and actor.

周华健 was born in Hong Kong in 1960. His father was a rice seller and struggled to support his five kids. 周华健who grew up in his dad’s rice store, experienced the hardships of poverty. He still remembers the first watch he owned at sixth grade. And he can’t forget his first guitar – the guitar his brother gave him; the guitar in which he played during his adolescence all his favorite songs.

Huajian’s father opened a rice store, and Huajian grew up in this store.

When Huajian was a child, his brother gave him a guitar.

After graduating high school, 华健 enrolled the National Taiwan University, where the tuition was relatively cheap. He studied hard in order to enter the Department of Mathematics, but wasn’t quite sure what he really wanted to do in his life. In a local restaurant, where he sang and played folk songs during his studies, he met the people that changed his life.

In 1981, Zhou Huajian passed the entrance exams and entered the Mathematics Department of National Taiwan University.

One day while 华健 sang, an American girl named Constance Woods entered the restaurant. She was enthralled by his singing, and when she approached and told him:“你做的是一件很伟大的事业”(nǐ zuò de shì yī jiàn hěn wěidà de shìyè = you are doing a great job), he finally understood that singing is more than just a hobby.

Constance’s support encouraged 华健 to be determined about his singing career. She helped him find his goal, and he felt he found his mate. They got married the following year, and today they are proud parents of Andrew and Anya. 华健 speaks warmly in many interviews about his family and kids. “男人一生中最伟大的一个角色就是父亲” (nánrén yīshēng zhōng zuì wěidà de yīgè juésè jiùshì fùqīn = the greatest role in a man life is to be a father), he once said.

Huajian met an American girl at the restaurant, and got married the following year.

Constance wasn’t the only one to be charmed. A music producer who visited the restaurant as well was impressed, and offered 华健 a job as a music producer assistant. He had only six months left to complete his degree, but 华健 couldn’t wait anymore. He left university and joined the Taiwanese record label. Writing and producing songs for other was his main job, but he also sang several commercial jingles. One of them caught the ear of his boss; and in 1984, 华健 released his first single as an artist in his record label, in which he is still represented to this day.

One of his successful albums was released in 1991 under the name《让我欢喜让我忧》. More than two million copies were sold that year, and the song bearing the name of the album became a hit. The song is a cover of a famous Japanese song named「男と女」(meaning “Men and Women”).

“Let Me Be Happy, Let Me Be Sad” is an album of the Hong Kong singer Zhou Huajian, released in 1991.

华健 is a prolific artist. Over the years he released more than 40 albums in Mandarin, Cantonese and English. He never rested on his laurels, and frequently publish new albums. In 1994 he released another album. One of this album’s songs became another classic of 华健 love ballad, and one of my favorite songs –《其实不想走》(Qíshí bùxiǎng zǒu, meaning “I actually don’t want to leave”).

Another successful album of 华健 was released in 1997 under the name《朋友》(Péngyǒu, meaning “friends”). The Mandarin album sold more than 1.5 million copies in Asia. A catchy song bearing the same name became very popular, especially in graduation ceremonies.

You are welcome to visit his website, learn his songs lyrics, or watch him as a mentor in the Chinese reality talent show Sing My Song.