It’s time for another installment of Chinese idioms!

Fools talk about their dreams...

Basically, this idiom means to talk complete nonsense. The story behind it talks of a rich family who had a very foolish son. One day, he awoke to see the maid in his room. As he had seen her in his dream, he asked if she had seen him in hers. When she responded that she had not seen him in her dream, he freaked out and tried to order his mom to have the maid beaten. This idiom can be used in many ways to refer to absurd and unreasonable words. Here are a few examples:

You guys are just kidding yourselves.

But what you say about Miss Sun is complete rubbish. 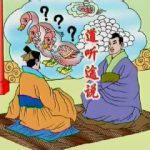 Get your story straight!

As this old story goes, there was a man named Ai Zi who was strolling along the road one day when he ran into Mao Kong. When he asked Mao Kong what had been going on recently, Mao replied, “Haven’t you heard?! Someone has raised a duck which can lay 100 eggs at one time!” Ai Zi was very doubtful of this claim, and he made Mao aware of this. “Well… it was two ducks that laid 100 eggs!” Once again, Ai Zi expressed his doubts. “Umm… then it was three ducks!” said Mao. Finally, Ai Zi asked him, “Where did you get your information from?” and Mao responded, “Well, I heard it at the roadside…” As such, this idiom is used to describe groundless hearsay or news.

Once upon a time, there was a man who loved eating pears and dates. However, one day a doctor told him, “Eating pears is good for your teeth, but overeating will harm your spleen. Dates are good for your spleen, but overeating will harm your teeth.” The man decided that as long as he only chewed the pears, and only swallowed the dates, he would be just fine. Of course, it wasn’t long before he experienced a horrible stomachache. This idiom is used to describe a person who accepts information without prior analysis, reflection, and understanding.

Here is a short video about the “swallow the date whole” idiom.