It’s time for another installment of Chinese idioms. Today, we’ll look at a few very common idioms that you’ll encounter in your daily life here in the Middle Kingdom. 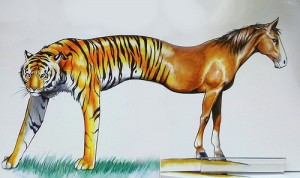 This everyday Chinese idiom literally translates to “horse horse tiger tiger.” As with most Chinese idioms, there’s a very interesting story behind this one. Back in the Song Dynasty, there was a painter whose work was quite abstract and was not understood by others. One day, he painted a tiger’s head. Shortly thereafter, one of his friends arrived. His friend asked him to paint a horse, so the painter just went ahead and added a horse’s body to the tiger’s head. The man’s elder son asked him, “What’s this painting of, Dad?” and the painter said, “It’s a tiger!” Later on, his younger son asked him the same question, to which the painter replied, “It’s a horse!” The elder son was out hunting one day when he saw a horse. Mistaking the horse for a tiger, he shot and killed it. As a result, the painter had to pay the horse’s owner a handsome sum of money. As if that wasn’t bad enough, his younger son was out one day when he saw a tiger. Mistaking the tiger for a horse, he tried to ride it. Not surprisingly, the tiger ate the little boy. Sad and distraught, the painter burned his horse-tiger painting.

Meaning: Something is just so-so or mediocre; a careless person.

This video describes this idiom and the story behind it in English.

Follow this link to find a similar video in Chinese with characters and pinyin for subtitles. 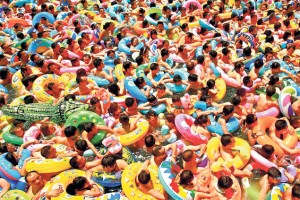 Talk about a sea of people...

This idiom literally translates as “people mountain people sea,” which is a fine piece of Chinglish on its own. Used as an idiom, however, it’s basically the Chinese equivalent of “a sea of people.” In the most populated country in the world, it should come as no surprise that this idiom is frequently used. It has even made its way to Urban Dictionary! Anytime you go to a Chinese train station, or visit a famous landmark during a holiday, you’ll be able to put this idiom to use.

Meaning: It basically means “a huge crowd of people.”

Use: Try this idiom out anytime you see large crowds of people. Here are a few examples: 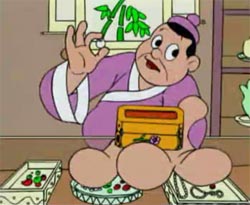 Take the box and leave behind the pearl.

Way back in the day during the Chu State (楚国), there was a vendor with a very precious pearl. In order to sell his pearl at a high price, he displayed it in a very fancy case. One day, a customer from the Zheng State (郑国) stood in awe at the beauty of this precious jewel. He decided to buy it at a high price, and the vendor handed over the case with the pearl inside. A few minutes later, the man came back to return the pearl, much to the surprise of the vendor. In the end, the vendor was good at selling the fancy case, but not his prize jewel, and the man clearly didn’t understand which was really valuable.

Meaning: This idiom means that someone acts foolishly without seeing things clearly.

Use: You can use this idiom to satirize someone who doesn’t see what’s really valuable or who makes a poor decision due to lack of judgment. For example, if my friend buys a nice picture frame and then discards the frame but keeps the cheesy picture inside, I’d say, “You’re buying the case and returning the pearl” (你这是买椟还珠 – nǐ zhè shì mǎi dú huán zhū).

Watch a short video about this idiom here.