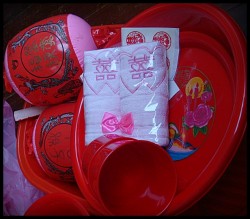 The "barrel of descendants."

In the last post, we looked at some of the ancient wedding customs of China. For Part Five, we’ll take a look at a few more pre-wedding customs, as well as the big day in Chinese culture – the wedding day. A lot of these customs are very traditional, but many are still practiced today (to some extent). Before the wedding, the bride’s family will prepare her dowry (嫁妆 – jià zhuāng). The dowry is composed mostly of daily necessities such as linen, dining sets (with two bowls, two cups, and two pairs of chopsticks), new clothes, gold jewelry, tea sets, and a barrel of descendants (子孙桶 – zǐ sūn tǒng), which is a set of baby bathtubs, pails, and a face washbasin, all in red. 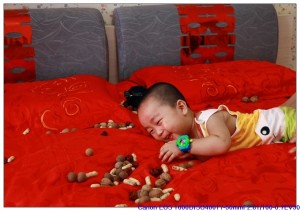 Children and fruit - OK to be on the wedding bed.

Next up in the series of wedding day preparations is the installation of the bridal bed (安床 – Ān chuáng). This process is known as “setting the bed” (压床 – yā chuáng), and it is performed by either a “good luck man” or a “good luck woman” – someone with many living children/grandchildren and a living mate. This process simply involves moving the bed slightly, along with adding the new wedding sheets. Traditionally, these would be red sheets with symbols of dragons and phoenixes. These days, however, with Western influence, many Chinese couples prefer pink sheets with flowers or hearts. Red packets with “Faith Coins” (缘钱 – yuán qián) will also be placed at each corner of the bed to symbolize blessings of wealth and prosperity for the couple. After making the bed, a bowl of fruit will be left as symbols of fertility and good fortune. The bed remains untouched until the wedding day, aside from children, who are free to roll around in the bed as they are also symbols of fertility. They will also add two bedside lamps. In Chinese, lamp (灯 – dēng) has the similar sound as son (丁 –  dīng). As such, lighting the lamps (添灯- tiān dēng) is symbolic of adding sons (添丁 – tiān dīng) to the family. 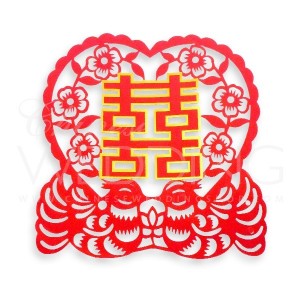 As for the wedding day decorations, there’s a whole lot of red, as well as the double happiness (双喜 – shuāng xǐ) image – that is, the character 喜 twice, compressed to look as if it’s only one Chinese character. When it comes to the wedding day rituals, there are plenty, including the hair combing (上头 – shàng tóu). The night before, the bride bathes in pomelo infused water, which is believed to cleanse her of of evil. At the dawn of the wedding ceremony, both families begin the ceremony with offerings to their ancestors and/or deities. Either the parents or another “good luck person” performs the ritual. Both the bride’s and the groom’s hair (not so much the groom these days) should be combed four times, with each stroke holding a blessing:

Getting the hair ready for the big day.

Finally, the groom is ready to go and pick up his bride. Sound easy? Well, it isn’t. As the bride’s family loves her so much, they put up one hell of a fight before they let her go. First of all, upon his arrival at the bride’s house, the groom is not allowed to open the door (of his carriage in the past or his car these days). Instead, he has to wait for the bride’s younger brother (or another young male related to her if she doesn’t have a brother) to open it for him. The groom then has to give the boy a red envelope of money, and the boy gives him two oranges, which should be left in the car for good fortune. Think that’s it? Yeah, right, think again.

Trying to pick up your bride is like an obstacle course in China.

The groom must then face a series of challenges from the bridesmaids, including: answering obscure questions about their relationship, reenacting the marriage proposal, singing love songs, or expressing his love through Chinese proverbs. They will block the door and bargain with the groom over the amount of money in the red envelope. It’s popular to bargain for strange amounts of money that include the numbers 8 (八 – bā) or 9 (九 – jiǔ), such as 888.88 or 999.99 RMB. Eight is an auspicious number because it sounds similar to the word for wealth (发 – fā) and nine because of its similarity to the word longlasting (久 – jiǔ). Finally, the groom gets to fetch his bride and plant a big kiss on her.

An example of what it takes to fetch the bride.

In the old days, another “good luck woman” (大妗姐 – dà jìn jie) would carry the bride on her back to the sedan. Another attendant would shield her (from evil), possibly with an umbrella, while others yet would throw rice (to keep the chickens from pecking at the bride). Firecrackers were set off to scare away evil spirits. The attendants were chosen with care, to ensure that their horoscopes matched up properly with the brides. The sedan was curtained heavily, to ensure that the bride didn’t catch a glimpse of anything unlucky or inauspicious. Superstitious much, ancient China?

After all of that hard work, the bride would finally arrive at the groom’s home. Finally, it’s time for the wedding ceremony and the banquet…