Chinese Love – Part One Posted by sasha on Oct 7, 2011 in Culture, Uncategorized, Vocabulary

Can you feel the love?

Throughout my time living in China, one question has managed to come up multiple times from friends and family back at home – “Is there a Chinese word for love?” While it is certainly true that Chinese people express the most complicated human emotion in different ways than Westerners, that doesn’t mean there is no love in China. Of course there is a Chinese word for love (爱 – Ài)! When most Westerners think of the word “love”, they automatically think about the all-important phrase – “I love you” (我爱你 – wǒ ài nǐ). Interestingly enough, this phrase is rarely uttered in Chinese culture – not from parents to children, not from husbands to wives, not from girlfriends to boyfriends. So, how exactly does China express its love?

Growing up in the US, I became accustomed to seeing people express love in certain ways – by hugging, kissing, or expressing their love verbally. Whether it was a passionate kiss between lovers, a teary eyed hug from a mother to her child, or two guys sharing an embrace bro-mance style, it was always obvious to me when love was in the air back at home. In China, however, expressions of love are not quite as obvious.

A short video teaching you the correct way to say “I love you” in Chinese. 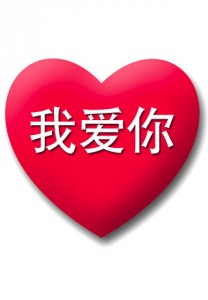 I love you (but I probably won't tell you).

And how about lovers in China? Well, it’s quite common for Chinese to find a boyfriend (男朋友 – nán péng yǒu) or girlfriend (女朋友 – nǚ péng yǒu) amongst classmates, although this is not really allowed until students reach university. Casual dating, in terms of a Western perspective, is something quite new to China. In the past, it was common for people to date only one person and then marry them. Often times, relationships were set up by family members. These days, however, more Chinese youth are adopting the Western custom of “playing the field.” First dates will usually be with a group of friends, and then a couple may become more exclusive and start going on dates alone if the mood is right.

Public displays of affection are not huge in China, but these days it’s becoming more and more common to see couples hug (拥抱 – yōng bào), hold hands (双手抱 – shuāng shǒu bào) and kiss (吻 – wěn, or 亲 – qīn) when out in public. Take a stroll around a Beijing park on the Night of Sevens Festival (七夕节 – qī xì jié), or Chinese Valentine’s Day (情人节 – qíng rén jié) as it’s more commonly called these days, and you’ll see countless couples and plenty of PDA. You probably won’t hear many couples saying “我爱你”, though. It’s more common to say “I like you”  (我喜欢你 – wǒ xǐ huan nǐ), or to actually use English. Seeing as how Westerners toss the word love around quite casually (“I love this restaurant!”, “I love the Detroit Tigers!”, “I love you, man!”), Chinese have also started being more casual with their “I love you”s… just not in Chinese!

Some more vocabulary related to dating.