Chinese Pinyin Posted by sasha on Dec 28, 2012 in Culture, Vocabulary

Chinese is a difficult language to learn, to put it bluntly. With no alphabet, Chinese instead uses characters (汉字 – hàn zì) – thousands upon thousands of them. As such, learning how to read and write Chinese fluently takes a long time and a ton of practice. However, for most of us who are trying to learn the language, our first priority is being able to communicate. Therefore, we are more concerned with the speaking and listening aspects of Chinese. Thankfully, there is a helpful system for learning Chinese pronunciation – the pinyin system (拼音 – pīn yīn).

This system transcribes Chinese characters into the Roman alphabet. Developed back in the 1950’s by the Chinese government, it has been the international standard since 1982, having taken over from the previously favored Wade-Giles format. When you see the names of Chinese people or cities in the news, you’re seeing it in pinyin. When you find a bus or subway stop here in Beijing, you’re seeing it in pinyin. You’ll also see it on menus, street signs, in shops; it’s basically everywhere. Young Chinese students study it alongside characters, it’s used in adult education to help those who are illiterate, and of course it is a lifesaver for foreigners learning the language.

To get you started on mastering pinyin, here are some of the basics:

All of the possible combinations in pinyin.

Of course, there’s more to it than that, but that’s a good base. I highly recommend this chart, which includes soundbites of every syllable in all four tones. There’s also plenty of helpful information and examples on the Wikipedia page.

Learn the basics of pinyin with this great Chinese cartoon.

Get your pronunciation down with this helpful video.

To understand the power of pinyin, let me share a quick personal example:

When I arrived in Beijing in August 2008, I spoke absolutely zero Chinese. This wasn’t a huge problem, as I lived with other foreigners and spent my working hours teaching English, but of course I needed to pick my Chinese up quickly in order to eat, ask for directions, bargain, and do all of the other things one does in their daily life when they’re not teaching small Chinese xiao hai er their ABCs or out drinking with their lao wai brethren. Hey, there’s some pinyin for you right there!

Anyways, after a month or so of living here, I got fed up with not being able to communicate. Luckily for me, I had a sweet deal with my new school where I could take about ten hours of small group lessons in Chinese every week. For the first couple of weeks, my lao shi drilled me strictly on pinyin and the tones. It was frustrating and time consuming, but it didn’t take long to start paying off. While I still couldn’t read a menu or handwrite a note with characters, I was starting to understand Chinese people, and even better, being understood by them. I still can’t read a newspaper here, although I’ve got a few hundred characters in my arsenal these days, and my handwriting is about as good as a Chinese two year old, but I can get around and communicate with very few problems. So thanks pinyin, and thanks to my patient teachers who helped me master it. 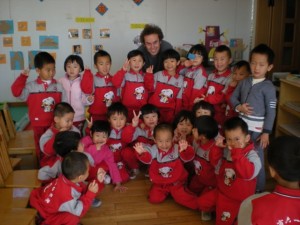 When I taught these kids 4 years ago, we were all learning pinyin.

Learning the ins and outs of the pinyin system will get you on your way to speaking Chinese and understanding others who are speaking. It can be paired with a study of Chinese characters very easily, as you need to use pinyin in order to type them on a computer or cell phone. Unless you’re really focused on mastering all aspects of the language in order to take an exam like the HSK, or you really want to get into reading and writing Chinese poetry, getting a firm grasp of pinyin is the place to start in your Chinese studies.