These days, young Chinese carry iPhones and listen to pop music (流行音乐 – liú xíng yīn yuè) by day, and they hit KTV (karaoke) clubs at night. Walking around Chinese mega-malls, you’re bound to hear the likes of Lady Gaga, Justin Bieber, or Cantonese/Taiwanese pop stars. So, you may be asking yourself, where is the traditional Chinese music? Well, head to a local park (公园 – gōng yuán), and you’re likely to stumble upon Chinese elders either practicing tai chi (太极拳 – tài jí quán) while listening to traditional music, or playing traditional Chinese instruments (乐器 – yuè qì). In a new series here, I’ll introduce a variety of Chinese instruments along with some of China’s musical history.

To begin with, there are eight sounds/tones (八音 – bā yīn) used to classify most of China’s instruments:

For this first lesson in Chinese instruments, I’m going to focus on the silk instruments, which are mostly stringed. While both nylon and metal are also commonly used to make strings today, silk strings date back thousands of years in Chinese musical history. When it comes to stringed instruments, they can be played three different ways: plucked, bowed, or struck. 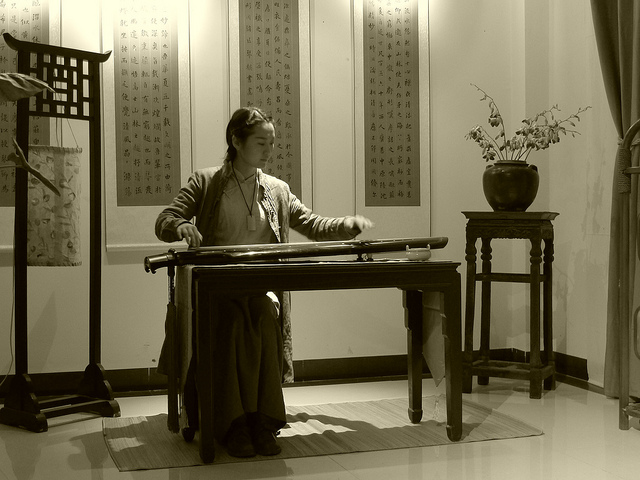 This seven-stringed zither instrument literally translates as “ancient stringed instrument”, and for good reason, as it has over 3,000 years of history. Often refered to as “the father of Chinese music” or “the instrument of the sages”, the Guqin was a favorite of China’s most revered philosopher – Confucius (孔子 – Kǒng zǐ). In the Imperial China of the past, a scholar was expected to be skilled in four arts: 琴, 棋, 书, and 画 (guqin, chess, calligraphy, and painting). Today, very few people are skilled in the art of the Guqin, making this traditional Chinese instrument a rarity in the modern era.

This video shows how the Guqin is made, and it also has some video of people playing it.

You can play a 3,000 year old instrument on your iPad! 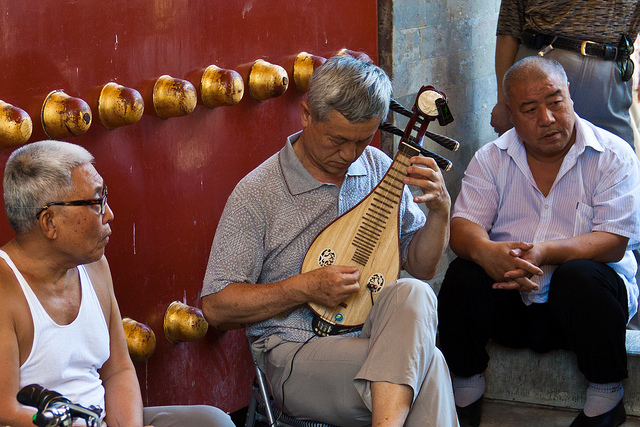 Also known as the Chinese lute, this four-stringed instrument has a body that resembles a pear, and it has been played in China for well over 2,000 years. Its name comes from the two ways that the instrument is played – 琵 means to push the fingers of the right hand from right to left, and 琶 means to pull the thumb of the right hand from left to right. In the past, one would need long fingernails to play the Pipa; today, with the introduction of strong nylon strings, false fingernails are used. Since players utilize all five fingers of their plucking hand, the Pipa has the widest range of techniques out of all Chinese instruments.

Learn all about the pipa and hear a bit of it in this video. 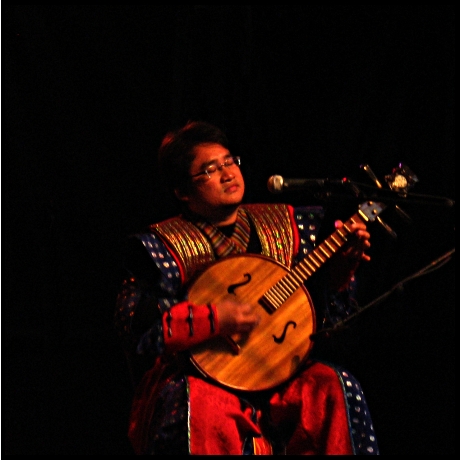 Also known as the moon guitar, this four-stringed lute got its name from a man named Ruan Xian (阮咸 – Ruǎn xián), a Chinese scholar who was also one of the “Seven Sages of Bamboo” (竹林七贤 – zhú lín qī xián). Actually, this instrument used to be known as the Pipa, but with the introduction of new oud-shaped instruments to China via the Silk Road, the more modern, pear-shaped instrument took the name Pipa. The Ruan comes in a variety of sizes and pitches, and these days it is commonly used in Peking Opera (京剧 – jīng jù) and Chinese orchestras.

A more modern take on the Ruan – the Angry Birds theme. 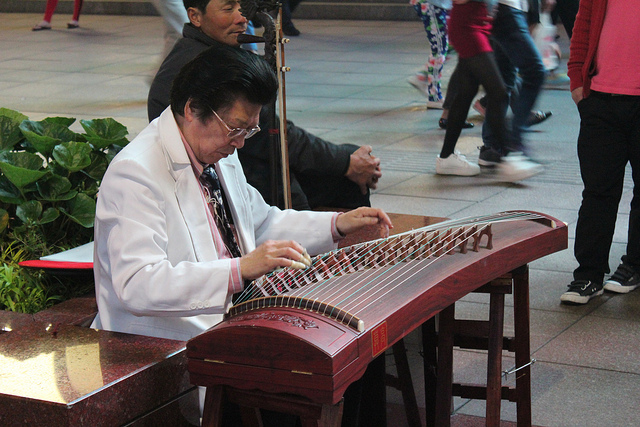 Image by Tim Sheerman-Chase from flickr.com.
Attribution 2.0 Generic (CC BY 2.0)

The “ancient zither”, this instrument has anywhere from 13-25 strings (Note: These stats were accumulated from various websites that all had different numbers) and movable bridges. Although this may somewhat resemble the Guqin, the two are actually quite different. Apparently, the Guzheng “can create sounds that can evoke the sense of a cascading waterfall, thunder, horses’ hooves, and even the scenic countryside.” As is the case with most plucked instruments, multiples picks are used on the right hand to play the Guzheng. Thankfully, this ancient instrument is still put to use in modern music – the Gorillaz used it on their track “Hong Kong”, and my favorite Chinese band Long Shen Dao (龙神道 – Lóng Shén Dào – lit. “The Way of the Dragon God”) employs it in both their studio recordings and their live show.

LSD rocking out in the studio – reggae/rock with the Guzheng!

Check out this 外国人 kick ass on a traditional Chinese instrument.

Finally, here’s a more traditional performance of the Guzheng.

In the next post, we’ll take a look at some of the Chinese bowed string instruments, including the famous erhu and a few others.