Chinese Websites Posted by sasha on Aug 22, 2011 in Culture

It’s no secret that one of the most popular activities in China is to surf the internet (上网冲浪 – shàng wǎng chōng làng). In fact, on nearly every street corner in Beijing, you will find an internet bar (网吧 – wǎng bā), often filled to capacity with chain smoking teenagers aggresively clicking away while engaged in an intense round of Counter Strike or World of Warcraft. If you’d like to read more about China’s affinity for online gaming, Steve has already written a great post about this. In a country with more internet users than the entire population of the United States, with more and more people getting online every day, it begs the question – what exactly are these 420 million people doing online? While it is true that the Great (Fire) Wall of China will keep you from accessing popular Western sites such as Facebook, Twitter, YouTube, and Blogspot, China has its own variety of each of these popular sites, attracting millions of visitors each and every day.

Sure, Mark Zuckerberg’s world-wide phenomenon is inaccessible in Mainland China, but that hasn’t stopped Chinese people from jumping on the social networking bandwagon. The most popular site for this is www.renren.com (人人网 – rén rén wǎng), which translates literally as the “everyone network.” With over 160 million users, the site is extremely popular amongst college students. Just like Facebook, users create a profile with information about their education, hobbies, and hometown. The popularity of this site is extending outside of the Middle Kingdom, as Renren is geared up to make an IPO in the US. If you want to find your friends in China, this is probably the best place to look!

Sure, we’ve all read about the trials and tribulations of Google in China, but the American search giant isn’t the only way to find what you’re looking for on the web. In China, if you are going to do a search, chances are you’re using Baidu(百度 – bǎi dù). With a catchy slogan, “百度一下，你就知道 – Bǎi dù yī xià, nǐ jiù zhī dào,” which translates roughly to, “Just use Baidu, and then you’ll know,” this Beijing based site pulls in about an 84% share of the Chinese search engine market. According to Robin Li (one of the founders of the site), “Baidu, whose literal meaning is hundreds of times, represents persistent search for the ideal.” You can do just about everything on Baidu, with search features for news, MP3s, videos, and just about anything else you can imagine. In 2007, Baidu becamse the first Chinese company to be offered on the NASDAQ 100.

A much cheaper eBay.

Harnessing the power of the internet for shopping is becoming more and more popular in China. In fact, according to this BBC article, “Last year, $82bn (£50.4bn) worth of retail sales in China were online transactions. That is just about a tenth of the total retail sales, but a 95% increase on the value of internet transactions a year earlier.” So where does all of this online shopping take place? Well, a lot of it goes down on Taobao (淘宝网 – táo bǎo wǎng). Similar to eBay in the US, Taobao allows entrepreneurs to open online retail stores for business-consumer or consumer-consumer sales. As of the end of last year, there were 370 million users on Taobao, as well as over 800 million product listings.

Ask any Chinese college student what they like to do online, and you’re almost guaranteed to hear, “Chat on QQ.” The most popular instant messaging service in China is also the world’s largest online community, with over 636 million users. Where Facebook eats into study time and serves as the ultimate distraction for US college students, QQ does a similar job of lowering grades for their Chinese counterparts. 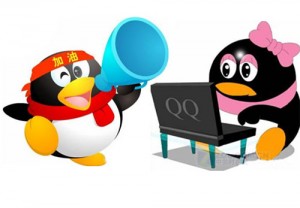 Unless you have a VPN, you'll have to settle for this Chinese YouTube.

As far as watching TV shows and movies go, look no further than Youku (优酷). Unlike YouTube, which limits the size/length of videos that are uploaded, Youku allows users to upload entire films, including many made in Hollywood. This is a result of poorly enforced copyright laws in China, although pressure from foreign filmmakers has started to make it more and more difficult to upload and watch copyrighted material.

Last but not least, there are the Chinese dating websites. With millions upon millions of single people out there (about 180 million according to this report), online entrepreneurs have capitlized on the market for love. Whereas most Chinese of the older generation married their high-school sweetheart, many younger Chinese are finding love online. Websites such as Zhenai (珍爱 – zhēn ài – lit. “cherised love”) and 95195.com (我在找你 – Wǒ zài zhǎo nǐ – lit. “I am looking for you) allow users to post pictures and a profile of themselves while they browse those of other singles. Of course, this comes at a cost – a 6 month membership to Zhenai will run you 3,200 RMB, or about $484. Maybe The Beatles had it all wrong when they said, “Money can’t buy me love.”

Now that you know most of China’s favorite websites, it’s probably time you start learning Chinese so you can understand them. Luckily, we’ve got that covered for you. Just CLICK HERE to get started.