Chinese Winter Vocabulary Posted by Ayana on Nov 15, 2021 in Vocabulary 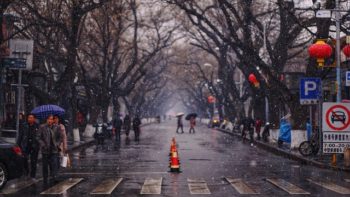 Photo by Ethan_Zhan from Pixabay, CCO

Autumn has come, the temperatures are gradually dropping, and winter is just around the corner. Chinese has two names for winter:

Both names consist of two characters: the first one 冬 (dōng) means winter, and the second – 季 or 天– mean season. 季 (jì) comes from the Chinese noun for season 季节 (jì jié). 天 (tiān) bears many heavenly meanings: day, sky, heaven, God, weather, season. The second name for winter in the chart above, the one with the character 天 as season is more common in spoken language.

The four seasons are spring, summer, autumn and winter.

In the northern hemisphere, winter is the coldest season.

Several years ago, I celebrated the Chinese New Year in China. I was at home, watching TV, waiting to 包饺子 (bāo jiǎo zi). The TV station broadcast that evening from two different locations: 三亚市 (Sānyà shì) located in the south shore of the southern island province Hainan; and 漠河市 (Mòhé shì) located in the Northern Province Heilongjiang near the Russian border. Celebrations in these two places were totally different. While people in Sanya were still enjoying the sunlight, dancing in the beach, the people in Mohe were wearing heavy clothes, sitting around the kitchen stove for warmth and light. Mohe is the northernmost city in China, and it suffers long severe winters (严寒yán hán). 严寒 (yán hán) means bitter cold, severe winter. As the Chinese dictionary defines it: 极度寒冷 (jí dù hán lěng, extremely cold).

The second character in the phrase – 寒 (hán) – is an adjective meaning cold, chilly. It appears in many phrases describing wintery weather or relating to the winter season:

One of my favorite phrase of 寒 is: 寒暄 (hán xuān). The two characters in the phrase are actually antonyms. 寒 means cold, and 暄 means warm. 寒 has the ice radical that looks like two drops of water (as in the winter character 冬 it appears on the bottom). 暄 has the sun radical that looks like a square with a line in the middle (as in another character for warm 暖 it appears on its left). Together the short phrase 寒暄 that literally translated as cold warm, means to talk about the weather, to engage in small talk. It is used when exchanging conventional greetings. As the Chinese dictionary explains: 今多泛指宾主见面时谈天气冷暖之类的应酬话 (jīn duō fàn zhǐ bīnzhǔ jiànmiàn shí tán tiānqì lěngnuǎn zhī lèi de yìngchóu huà, nowadays, the phrase generally refers to social talks such as the cold and warm weather when the host and guest meet). For example:

The leaders exchanged greetings with each other, and then began negotiations.

She was very shy and only exchanged a few brief greetings.

He is often too busy, even for a small talk.