Move Over Tsingtao – Craft Beer in China Posted by sasha on Apr 8, 2015 in Culture

While much of the content on this blog focuses on the traditional aspects of Chinese culture – the festivals, cuisine, wedding customs – it’s also important to shed some light on the modern side and the absorption of more recent foreign influences and their affect on popular culture. Over my five years living, learning, teaching, and traveling in the Middle Kingdom, I’ve been amazed to find elements of foreign cultures so readily accepted here. From the popularity of American TV shows like “House of Cards,” to groups practicing Brazilian capoiera, to shops full of French wines, a country that was closed off for so long has revealed its insatiable appetite for the new and foreign. Over the past two weekends, I experienced this firsthand at two very different festivals in two very different parts of the country. If your image of a Chinese party is sipping green tea and listening to Peking opera, be prepared to have your mind blown. Let’s start with a big change in the beer drinking culture of China.

The Arrival of Craft Beer 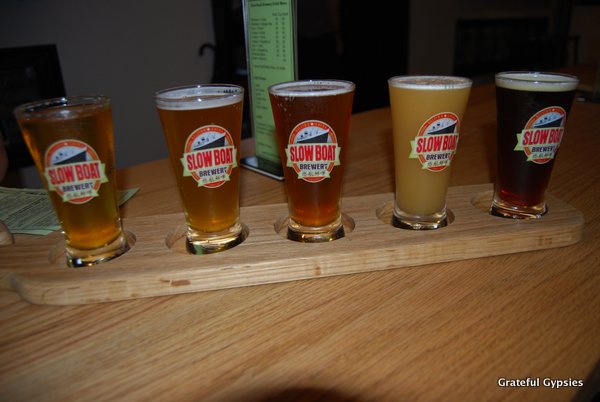 Craft beer is here to stay!

When I first arrived in Beijing back in 2008, the beer situation was a sad one. As a connoisseur of craft brews, I was beyond disappointed to find the watered down Chinese “beers” to be the only option most of the time. With no flavor, an alcohol content of around 2%, and the fact that it was often served at room temperature, there was not much to get excited about. At that time, the best that you could hope for was other mass-produced beers – Budweiser, Heineken, Carlsberg, and so on. Fast forward a few years, and my how things have changed! Thanks to the success of a few micro-breweries in Beijing, craft beer is slowly but surely infiltrating the rest of China. What the guys at Great Leap (大跃啤酒 – dà yuè pí jiǔ) and Slow Boat (悠航鲜啤 – yōu háng xiān pí) started in the capital has spread not only to other big cities like Shanghai and Guangzhou, but also to much smaller markets such as Kunming and Chengdu. It’s not just the lao wai (老外) drinking this stuff, either – more and more Chinese beer drinkers are happily dropping down a lot more of their RMB on a glass of craft beer.

For many of the micro-breweries in China, an important aspect of the brewing process is using local ingredients. Although many still import hops and grain from places like the US or Germany, adding uniquely Chinese ingredients has both helped the craft beer scene here set itself apart from that of other countries and attracted more local customers. Take for example the Honey Ma Blonde on tap at Great Leap – it combines the mouth-numbing Sichuan peppercorn with honey from Shandong to create a unique and tasty beer. The owners of Great Leap and Shanghai based Boxing Cat (拳击猫 – quán jí māo) recently combined forces to produce the country’s first collaborative craft beer. Called Yunnan Amber, this brew is infused with dianhong tea (滇红茶 – diān hóng chá) from the province after which it is named, and it is a great representation of the mixture of American brewing techniques with Chinese ingredients. If this is the future of beer in China, then the future looks good. 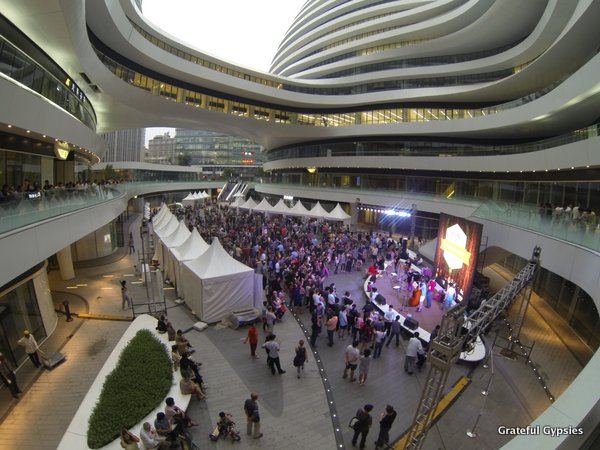 Naturally, the burgeoning craft beer scene has led to a variety of festivals across the country. Both Beijing and Shanghai have been hosting an annual beer festival for the past few years, drawing thousands of thirsty folks looking to wet their whistle with brews that were Made in China. Shenzhen recently joined the party with its first-ever craft beer festival thrown by local joint BionicBrew.

Enjoying the view and the brews at the SZ beer fest. 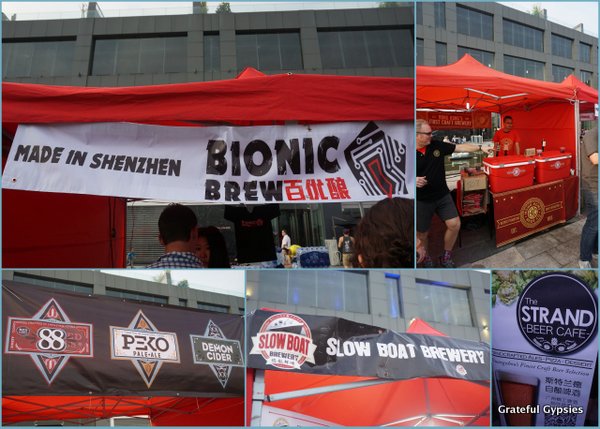 Some of the Chinese breweries on hand for the fest. 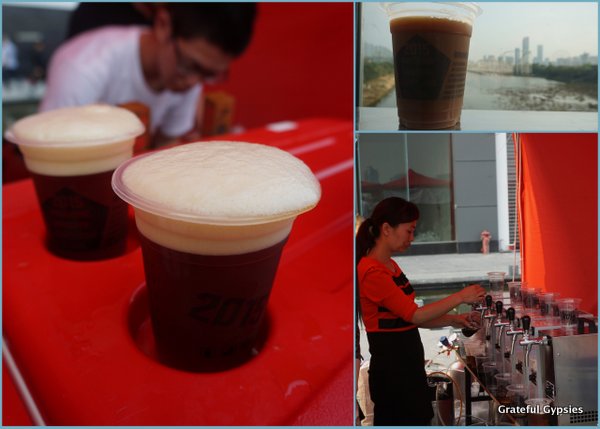 It’s all about the beer!

This daylong celebration was full of food, music, and of course some of the best beer from around China. It was also somewhat a crossroads of cultures – foreigners and locals mingled over IPAs and munched on New York pizza while jamming out to an all-girl Chinese rock band under a statue of Chairman Mao while a fisherman paddled his bamboo raft in the shadow of new skyscrapers and a roller coaster. While taking in this scene – admittedly with a slight buzz – I couldn’t help but think to myself that this is what modern China looks like. The traditional remains, but more and more outside influences are being added to the mix. If that means more craft beer popping up, I’ve got just one word to say – cheers! 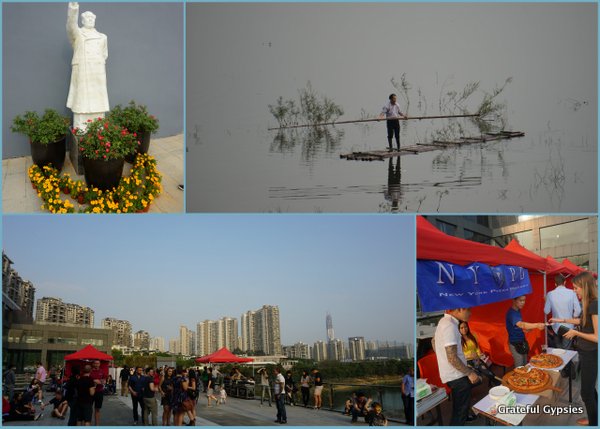 I wonder which kind of beer Mao would drink? 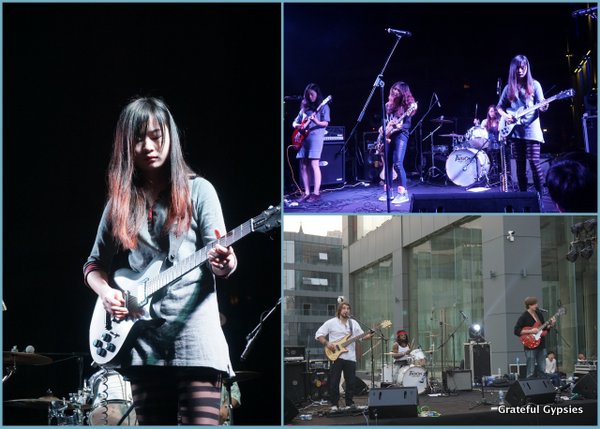 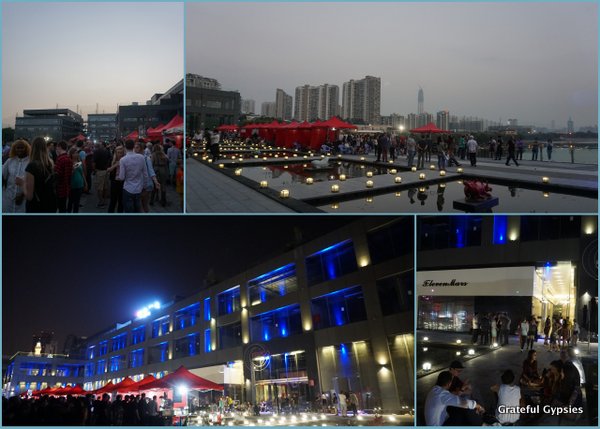 The first one was a huge success. 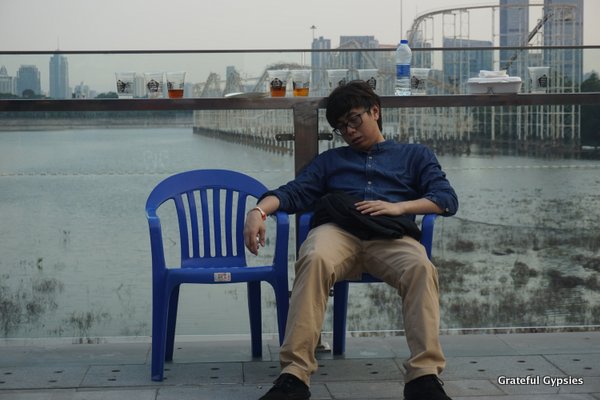