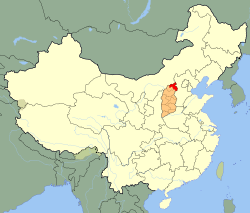 Datong on the map

In the northern part of Shanxi province, not far from Inner Mongolia, you’ll find the city of Datong (大同 – dà tóng). Thousands of years ago – during the Han Dynasty circa 200 BC – it was known as Pingcheng (平城 – píng chéng), and it would eventually become the capital of the Northern Wei Dynasty (北魏朝 – běi wèi cháo) from 398-494 AD. Since then, the city has had a tumultuous history, as it has been sacked, rebuilt, and subsequently sacked again on multiple occasions. In modern times, Datong has been known across China as the “Coal City,” thanks to its large reserves and the resulting dirty air that comes with them. Recently, the government has realized that having this big city rely completely on a non-renewable resource that heavily pollutes the air is not such a good idea. As such, there is an effort to rebuild and renovate Datong and have it eventually be known for more environmentally friendly energy production as well as tourism.

Panoramic view from the City Wall. 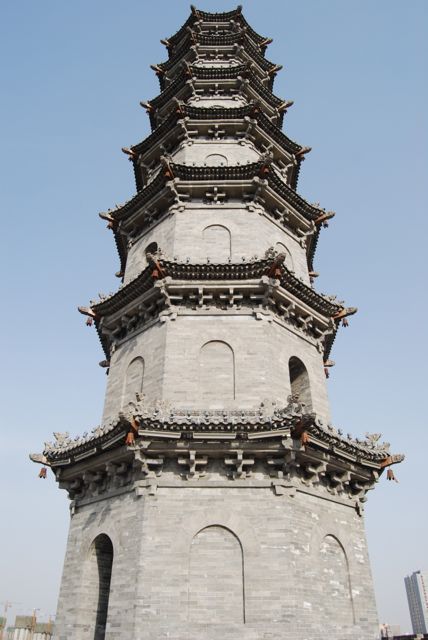 Pagoda atop the City Wall

To help bring in the tourist renminbi (人民币 – rén mín bì), Datong has recently been completely rebuilding historical sites that were destroyed in the past.  The ancient City Wall (城墙 – chéng qiáng), which isn’t quite finished yet, is now open for tourists to stroll along. Over one side of the wall, you can take in the views of the old city. Below, you see traditional one story homes – many of them are crumbling and others have already been completely torn down. Time will tell how Datong plans to fix up these historical neighborhoods. Over the other side, you see the rapid development of the city in action – cranes are everywhere, high-rise apartments are sprouting up, and massive shopping malls fight for attention amidst the hordes of people. 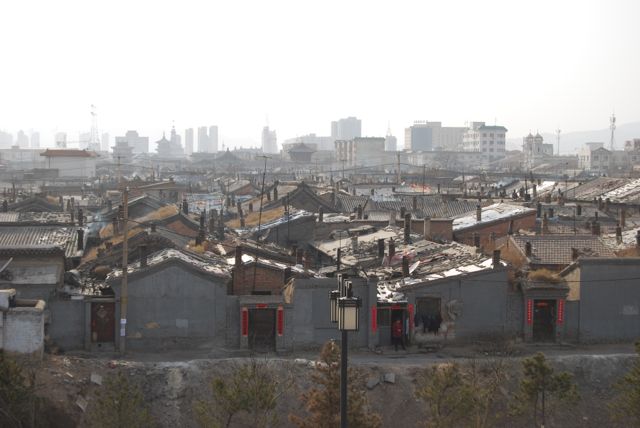 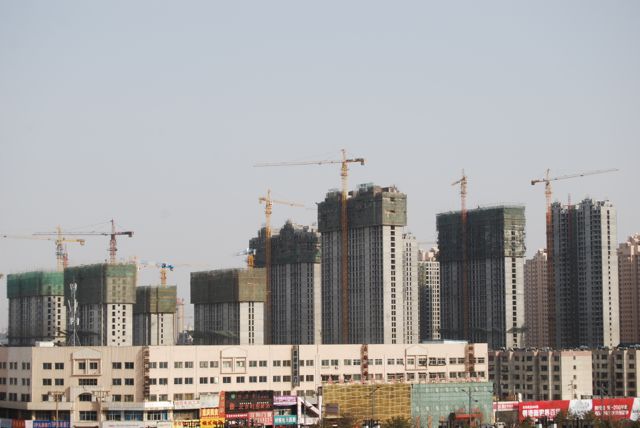 Strolling around the old city is the best way to get around at the moment, as many of the roads are completely torn up. It’s small enough to walk, and doing so will take you past plenty of other places of interest – the old Drum Tower, a mosque, and the Nine Dragon Screen (九龙壁 – jiǔ lóng bì). Clocking in at 600 years, apparently this is the oldest and largest glazed screen in all of China. 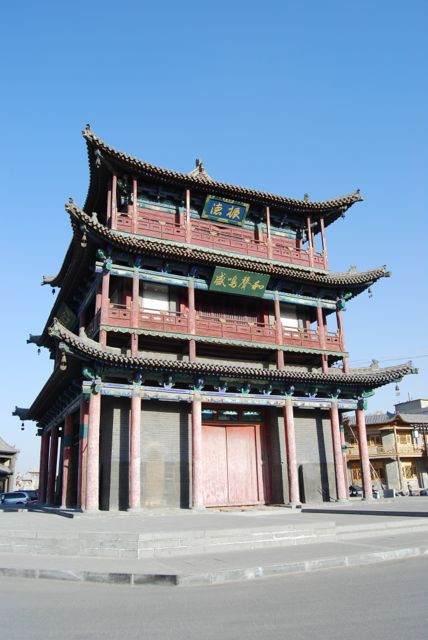 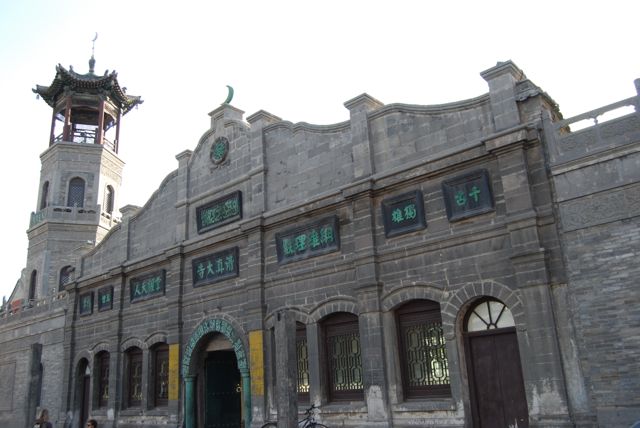 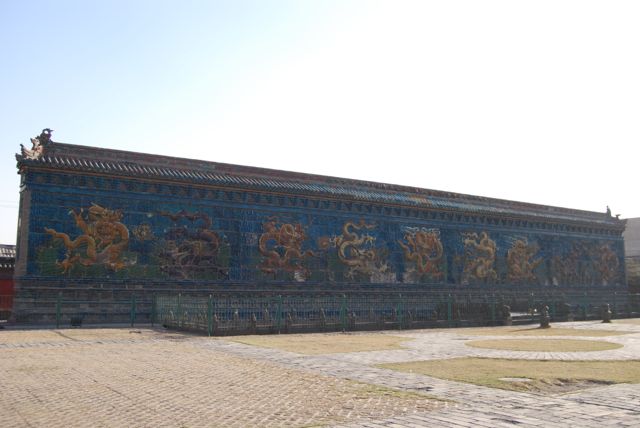 At the end of the main pedestrian road in the city, you can find the Huayan Monastery (华严寺 – huá yán sì), which was also completely rebuilt just a few years ago. This Buddhist monastery was originally constructed during the Liao Dynasty (907-1125), whose emperors were strict followers of Buddhism. 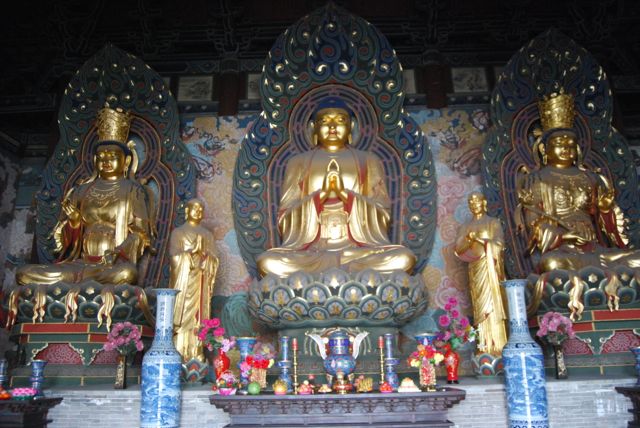 Buddha statues in the monastery

After its recent facelift, this sprawling complex really is quite visually impressive. There are many halls to visit, all featuring a variety of statues and artwork. Visitors can also climb to the top of the pagoda to get a bird’s eye view of the old city. From here, you can spot even more cranes, and what appear to be the makings of more newly rebuilt historical structures. Looking down on the contrast below, it was here that I decided to dub Datong an “old, new, old city.” With thousands of years of history, construction and modernization everywhere you look, and the skeletons of ancient buildings coming back to life, it seemed like a fitting nickname.

Getting There: There’s no airport here, so you need to get in by either train or bus. Trains from Beijing take about 6-7 hours, and a sleeper ticket is less than 100 RMB one way. Alternatively, you can take a train to the provincial capital (Taiyuan) first, and then switch to a bus. 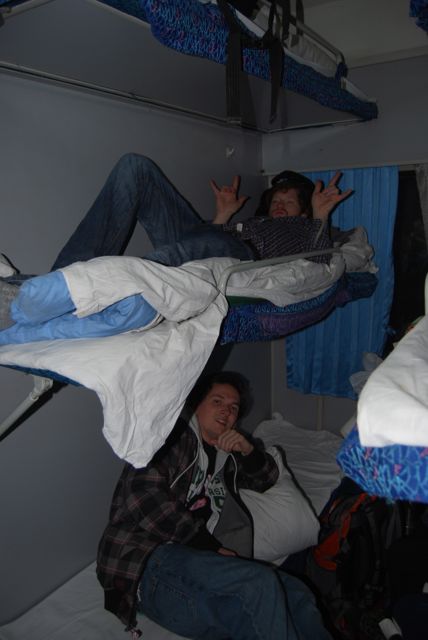 Hard sleeper bunk on the train

Accommodation: There are plenty of hotels in the city, but there appears to only be one youth hostel. The Datong Youth Hostel is located above a children’s clothing shop in a nice central location down the street from the Huayan Monastery. On our stay, a private double room was 158 RMB/night, while a bed in a dorm room was just 50. 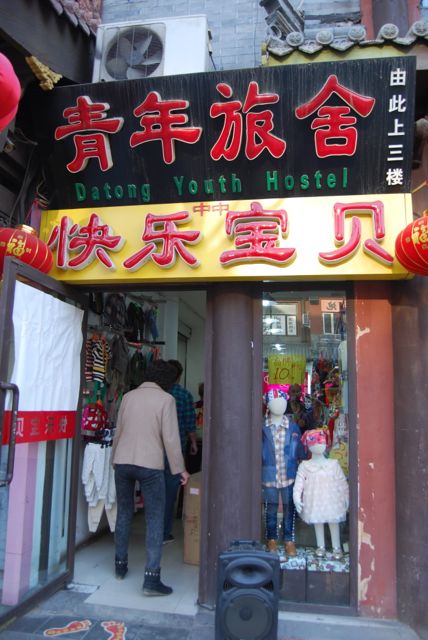 Getting Around: As previously mentioned, many roads are torn up. This has altered several of the bus routes. The old city is small enough to walk around the whole thing. Cabs are cheap as well, starting at just 6 RMB. For the major attractions outside of the city, you can either take a public bus or easily hire a private car. 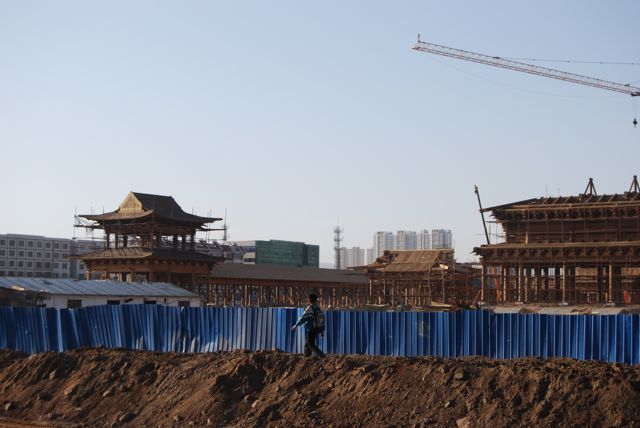 Walking home from school in Datong

Sights: The old-new City Wall will set you back 30 RMB for a ticket, while the newly remodeled Huayan Monastery costs a steep 80 RMB. The Nine Dragon Screen is a mere 10 RMB, which is good considering you won’t spend more than 10 minutes there. For a cheap day, simply stroll around the old neighborhoods or visit the park and square to live like a local.