Do People Celebrate Christmas in China? Posted by sasha on Dec 5, 2018 in Culture, Vocabulary

When I lived in China, I always got the same question from family and friends around this time of year – “Do people celebrate Christmas in China?” The short answer is “Yes,” but there’s a lot more to it than that. In this post, I’ll try to shed some light on what Christmas is like in the Middle Kingdom. I’ll also share some useful Christmas vocabulary and even a really silly video at the end. 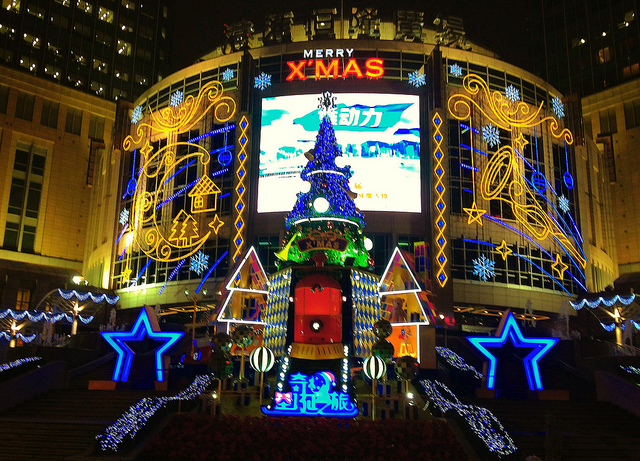 The Religious Side of Christmas

Christmas (圣诞节 – shèng dàn jié), or the “Holy Birth Festival” as it’s directly translated, is not a national holiday in China. This should come as no surprise in a country that does not have any official religious holidays. A vast majority of Chinese people identify as non-religious, or they follow Chinese folk religions. Chinese culture has been shaped by the “three teachings” (三教 – sān jiào) – Confucianism, Taoism, and Buddhism. Only about 2.5% of China’s population identify as Christian (基督教 – jī dū jiào).

Despite the Chinese name of the holiday giving a pretty obvious clue as to what it’s about, many people in China are unaware that Christmas celebrates the birth of Jesus (耶稣 – yē sū). I would often ask my students to come up with what they knew about the holiday as well as some questions to ask about it, and most of the answers I got were based on the secular traditions of the holiday. 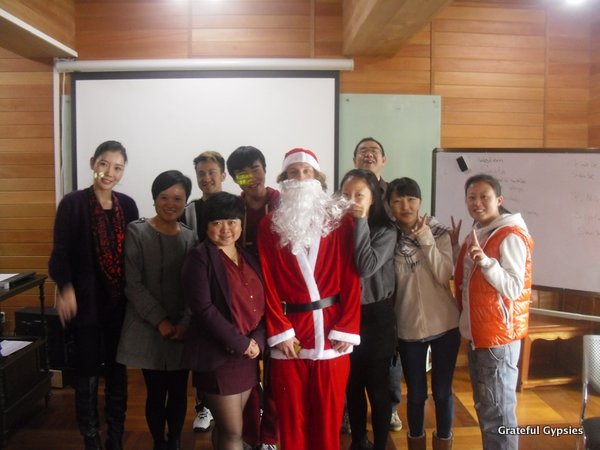 The Secular Side of Christmas

Without a doubt, the most well-known aspect of Christmas in China is buying gifts (买礼物 – mǎi lǐ wù). Although most people in China don’t celebrate the religious side of Christmas, they sure love the commercial one. Check out this video from CCTV Business about the popularity of Christmas shopping in China:

Next, practice your Chinese reading and listening skills by watching this clip of people being interviewed at a bustling mall about their thoughts on Christmas:

There are Christmas trees (圣诞树 – shèng dàn shù) and lights in shopping malls all over the country, as people take advantage of holiday deals while humming along to Christmas carols (圣诞歌 – shèng dàn gē).

Speaking of Christmas carols, why not try singing one in Chinese? “We Wish You a Merry Christmas” is actually pretty easy! Here are the lyrics in Chinese characters and pinyin:

Starting in December, the image of Santa Claus (圣诞老人 – shèng dàn lǎo rén – lit. Christmas old person) is everywhere you look in China. I always enjoyed dressing up like Old St. Nick around Christmas and planning special lessons about him for my English classes in China. My students were usually quick to point out the absurdity of the story – “How does he fit down the chimney? He’s too fat!”

In one lesson I taught, my students had to come up with a Chinese Santa. It was decided that he would simply come in through the front door, as most people in China live in apartments and don’t have a chimney. He would ride a dragon instead of reindeer, and children would leave him dumplings and green tea. Rather than give toys, books, clothes, and all that, Chinese Santa simply leaves behind a few hong bao (红宝 – hóng bǎo), the red envelopes that children receive during Spring Festival. 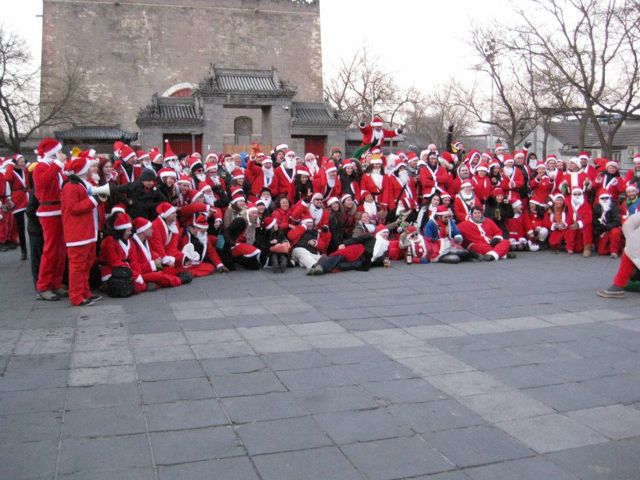 Perhaps my favorite part about Christmas in China was participating in the annual SantaCon event. Parading around Beijing dressed like Father Christmas was so much fun. We sang carols on the subway, took a ridiculous group photo in Tiananmen Square, and spread holiday cheer all over the capital. Check out my highlight video from the 5th edition of SantaCon Beijing to see for yourself:

What did people in China make of this event? Some of them joined us, a few followed around for a while to check it out, and most of them just grabbed their iPhones to snap a few photos for WeChat.

I had so much fun during Beijing SantaCon that I even decided to return for one more year while I was living in Kunming. It’s about 2,700 km on the train, so I opted to break up the journey in a few cities. Me being the silly laowai that I am, I also decided to wear my Santa suit the whole way. Hilarity ensued. You can read all about my Santa adventure and check out the video below:

Oddly enough, I never really got that homesick when I celebrated Christmas in China. Sure, it’s not exactly a holiday there, but you’ve got trees, lights, and carols everywhere you go. Young Chinese people especially are very interested in the holiday, and my students always really enjoyed the Christmas-themed classes and parties. 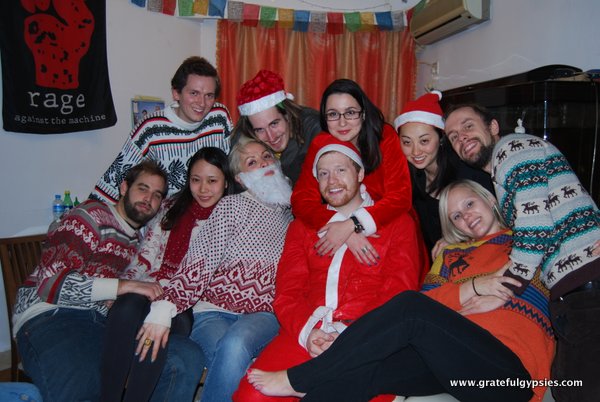 Being silly at Christmas time in China.

Plus, I was able to take part in awesome events like SantaCon and go out to fancy hotel buffets with friends. We also had a great time hitting up local markets in search of ugly Christmas sweaters and silly presents to give each other. I’m happy to be home visiting family for the holidays, but to be honest a big part of me actually really misses those years celebrating Christmas in China. Who knows, maybe I’ll bust the Santa suit out again next year and head back to the Middle Kingdom…

Have you ever celebrated Christmas in China? What did you think of it? What were your impressions of the Chinese version of this holiday?