In the high desert plains of northern China, water dictates development. Nowhere can this be better illustrated than in Dunhuang or 敦煌 (Dūn huáng), one of the largest oasis-cities in Gansu Province or 甘肃 (Gān sù).

Dunhuang roughly translates as “blazing beacon” in Chinese, a moniker it bestowed upon it as the terminus of the Great Wall into western China. The surrounding area includes the Crescent Lake and Mingsha Shan (鸣沙山) mountain range which roughly translates as “Echoing-Sand Mountain” due to the eerie sound created by strong winds whipping over sand dunes (沙丘 shā qiū).

Dunhuang is most famous for the Mogao Cave Grottoes or 莫高窟 (mò gāo kū), the Yardang National Geological Park and its singing sand dunes. Much like Kashgar, Dunhuang benefits from a natural oasis, allowing for sustained agriculture and development to occur for centuries. During the early ADs, it became a focal point of migratory Buddhists who deemed the area  as “mystical” due to its singing sand dunes, odd rock formations and availability of water in this harsh desert. 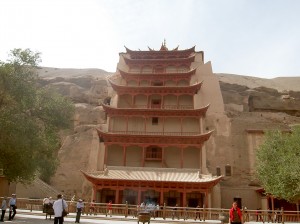 During the mid 4th century AD, Lè Zūn (樂尊), a notable Buddhist monk, envisioned setting up camp here by excavating caves and rooms of worship in the Mogao Grottoes. His goal was to provide a location for pilgrims to rest and meditate at while seeking spirituality. Over a millennium, these temple caves multiplied as pilgrims, artisans and monks left elaborate murals, sculptures and paintings within the 1000 individual caves and chambers.

Yet in the 11th century, for whatever reasons, the mural, sculpture and cave entrances were walled off, and remained buried until the early 20th century. Luckily, the arid geography and weather, kept these caves very well intact, sealing these relics in a natural tomb. 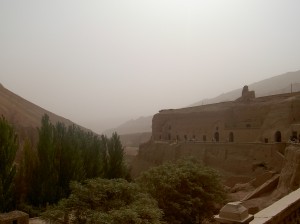 When rediscovered in the early 20th Century, huge stock piles of Buddhist, Confucian, Daoist and even Christian works littered the caves, with manuscripts dating from the early 300’s to the late 1100’s. Today, inside the caves, many of these wall paintings and sculptures still remain, allowing for tourists and travellers to explore the stone labrynths for a small fee.

Unfortunately, it is strongly urged not to photograph these majestic murals, sculpture and paintings, so I can only provide you with a top ten list of the largest attractions within Mogao by clicking here. Suffice it to say, the Mogao Grottoes are a must-see destination if in Gansu Province.

About a two hour ride outside of Dunhuang city proper, you can marvel at yet another grouping of rock formations–but this time they are not man made. 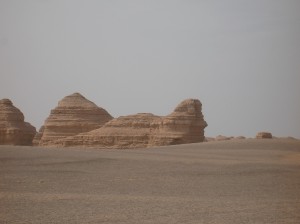 The Yardang National Geological Park, situated in the Gobi Desert, houses “yardangs” or pillars of jutting lime and sandstone caused by wind erosion from desert winds (they’re called yardangs because they generally resemble the shape of a ship). The results are sphinx or tower like columns of sandstone that jut meters above, seemingly ascending from the desert sand below. In this location, tourists can wonder the arid grounds, climbing rocks and snapping photos, or they can venture inside (where there is AC) to get a “geological history” of the area. *As a brief side note, this location was used in the desert fight scene of Hero (英雄) staring Jet Li.*

After wandering around through the desert all day in the blazing sun, you may want to pick an evening activity that lets you cool off and relax. What better place than the Mingsha Shan mountain range and sand dunes where you can experience the “singing sand dunes” while watching the majestic sunset over the mountains. Just remember to bring a jacket, because the temperatures will plummet once the last rays are choked off by the hills.

If you are a thrill seeker, right by the Mingsha Shan mountain range is a little oasis at Crescent Lake where you boat, ride camels and even go sand-dune sledding (see above photo). Just make sure you hold on tight–unless you want a mouthful of sand hitting you at 30 miles per hour.

See the Gallery below: 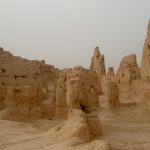 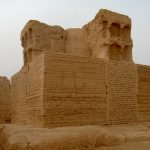 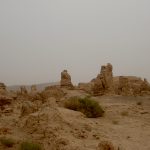 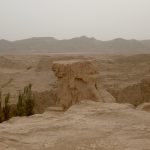 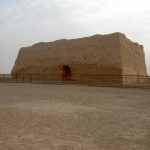 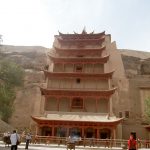 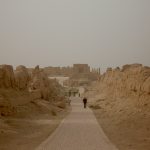 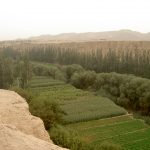 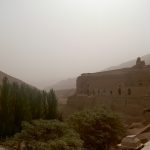 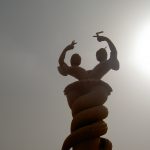 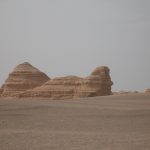 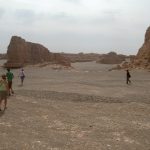 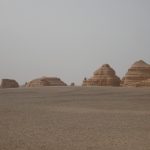 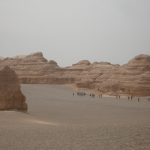 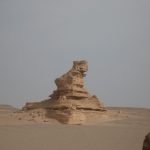 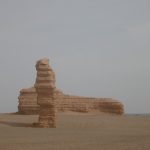 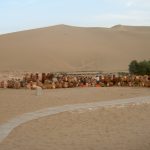 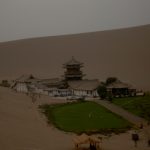 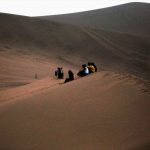 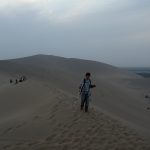 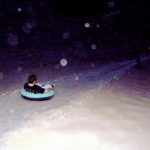