Exploring Guiyang Posted by sasha on Oct 26, 2015 in Culture

Capital of southwest China’s Guizhou province (贵州省 – guì zhōu shěng), the city of Guiyang (贵阳 – guì yáng) is situated on the Yunnan-Guizhou Plateau and the Nanming River. Although the city – and the province as a whole, for that matter – is often overlooked by travelers, its status as a major transport hub makes it a good place to break up a long journey and explore for a day or two. When I had the stupid idea to travel by train across China dressed like Santa from Kunming to Beijing, Guiyang made perfect sense as a pitstop along the way.  Here are some of my observations on this provincial capital based on my short stay there:

A City of Squares 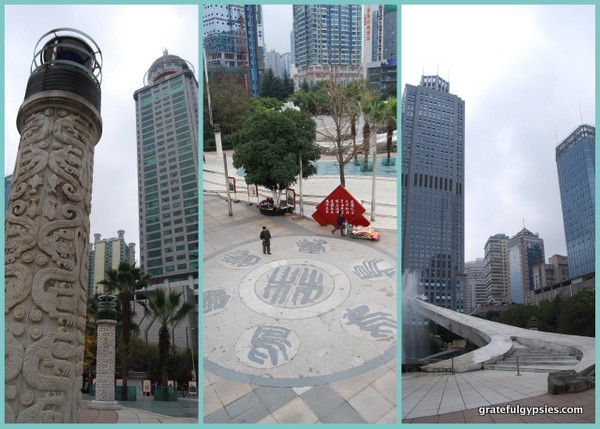 As with many large cities in China, Guiyang is home to many public squares where people gather to dance, practice tai chi, or whip a dreidel – an interesting form of exercise that many folks enjoy across China. One such place is the Big Cross Square (大十字广场 – dà shí zì guǎng chǎng), which is nice enough to stop by for a short stroll. In the evenings, the People’s Square (人民广场 – rén mín guǎng chǎng) becomes illuminated in a sea of neon and is packed with ladies wearing matching track suits participating in a large group dance. In Guiyang and other cities, spending some time in these public squares is a great (and free) way to soak up the local culture. 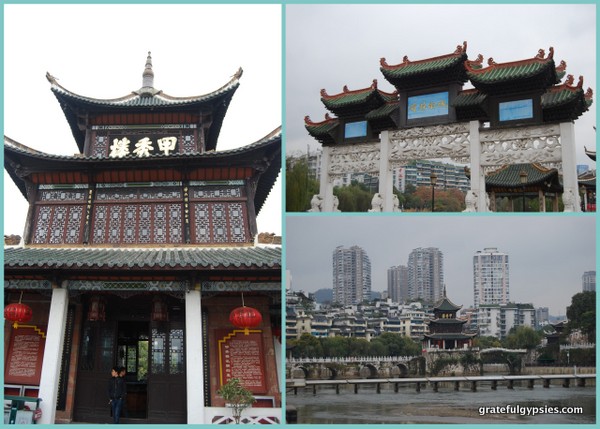 Guiyang isn’t exactly a city packed full of attractions like Beijing, but there are a few landmarks worth seeing. Most notable is the Jiaxiu Pavilion (甲秀楼 – jiǎ xiù lóu), a 3-story tower built back in the Ming Dynasty. Getting there involves a nice stroll along the river, where you just may see locals walking backwards – another interesting custom I have yet to see outside of China. 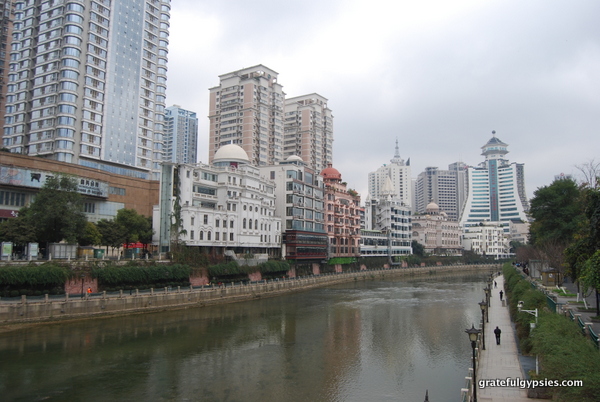 There isn’t a whole lot to see, but the tower itself is quite nice and is full of some intricate paintings and furniture, as well as the obligatory knick-knack shop and cheesy photo set that can be found at most tourist sites in China. 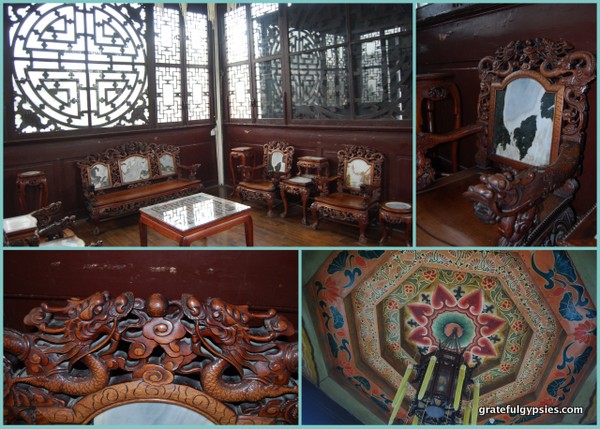 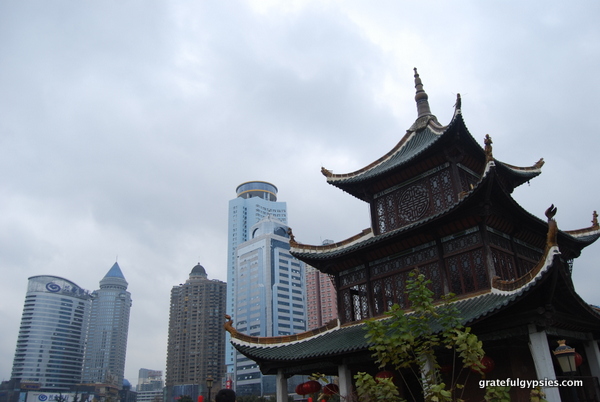 Right next door is the Cuiwei Garden (翠微园 – cuì wēi yuán), which you might as well check out while you’re over there. On our visit, there was a group practicing tai chi which made for a very peaceful and calming vibe. 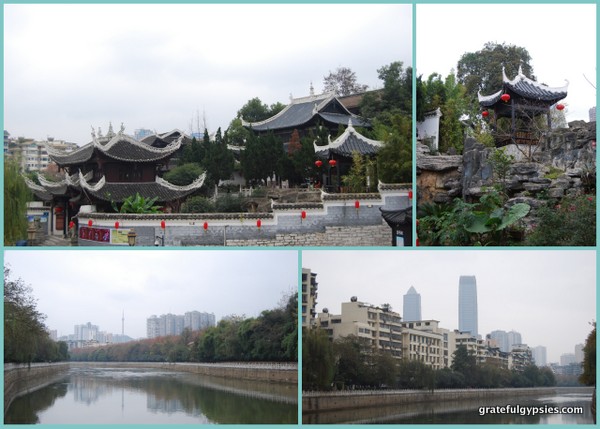 Cuiwei Garden and a walk along the river. 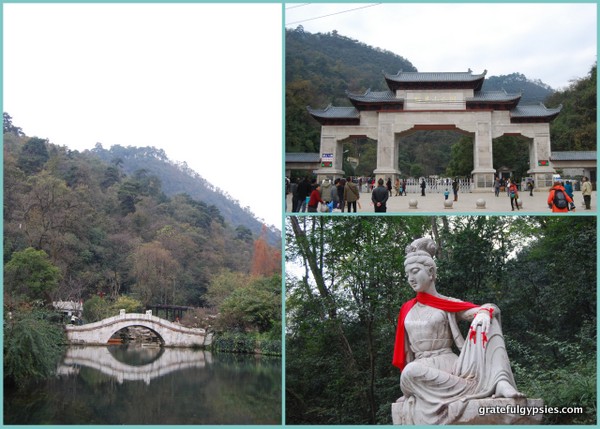 If you’ve got an extra afternoon to burn in Guiyang, it’s best to head to Qianling Park (黔灵公园 – qián líng gōng yuán) outside of town. It’s a very popular place for locals to come play cards, have a picnic, or just chill. As per usual in China, there’s a cable car for those too lazy to walk up the side of the hill, but it’s a nice and easy hike if you’re up for it. 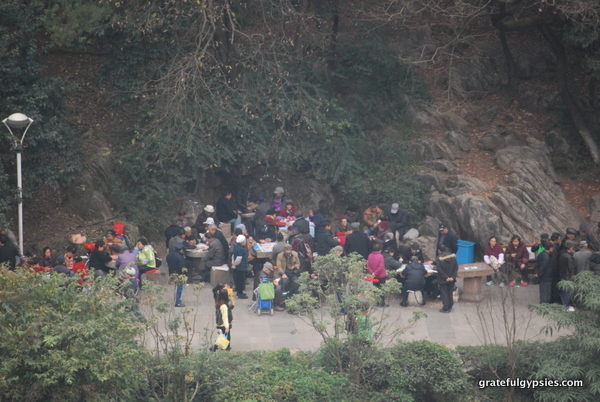 Inside the park, you’ll find the Hongfu Temple (弘福寺 – hóng fú sì), which is quite nice and comparable to the Lama Temple of Beijing. 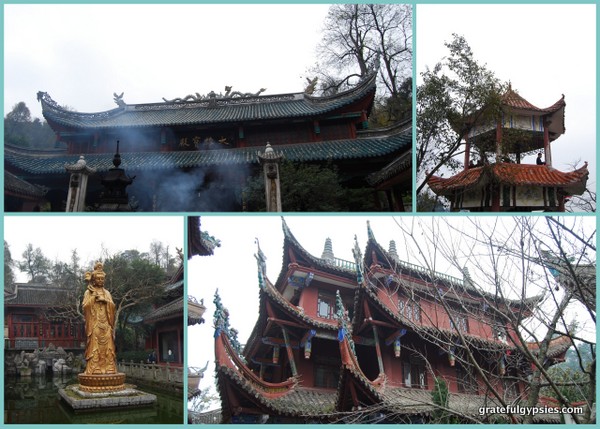 One interesting thing you may see outside of this temple is a little game surrounding a Buddhist mural. People spin around with their eyes closed, and then attempt to walk and place their hand in the center – a sort of “pin the tail on the donkey” game in a temple. Everyone we saw was blatantly cheating and opening their eyes multiple times, yet still celebrating as if they’d achieved something when they made it to the middle. 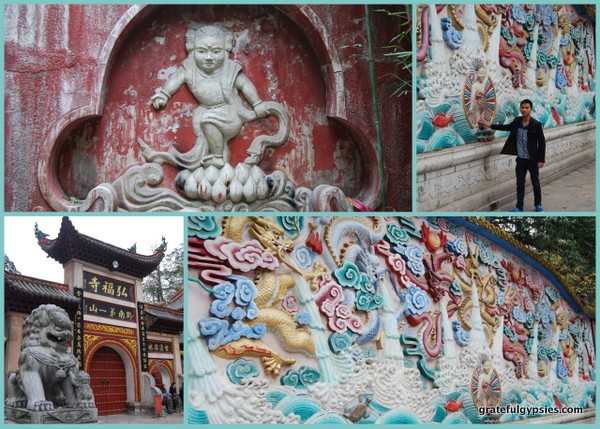 At the top of the hill, there’s a little tower where you can take in the views of the city. As with much of urban China, you’ll see tons of cranes working on new high-rises, towering over the old residential areas which are most likely on the chopping block. You can also spot the city’s TV tower and the hills in the distance, although they’ll probably be shrouded in a cloud of smog. 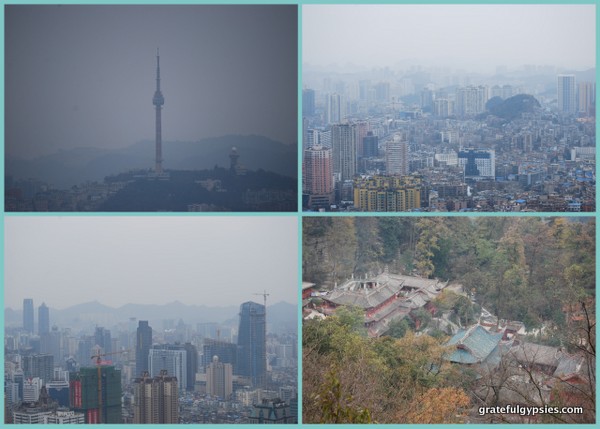 Taking in the views.

Out With the Old, In With the New 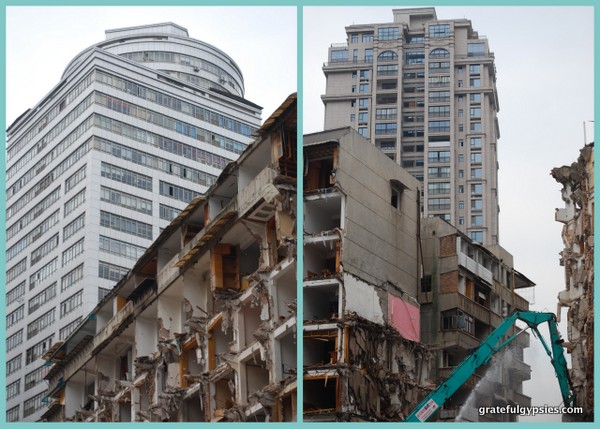 A familiar scene in China.

While walking around Guiyang, we saw old buildings being torn down on numerous occasions. This may be one the poorest provincial capitals in all of the country, but that hasn’t stopped the breakneck development seen across the country from arriving here as well. As we stood and watched this going on, locals were gathered around snapping cell phone pictures. Once the work was done, everyone went back about their business. After all, seeing old buildings come down is just an everyday occurrence here these days. 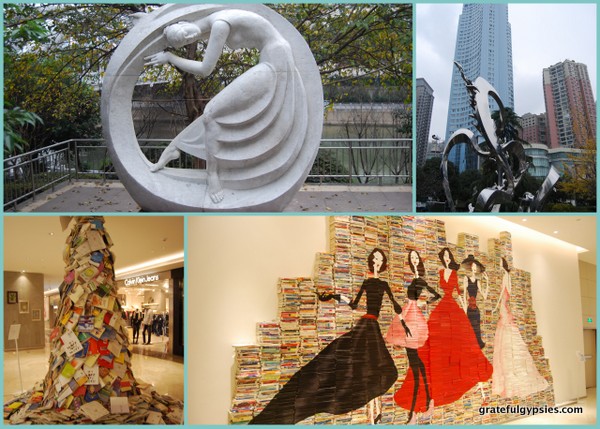 The new side of Guiyang.

While the tower, garden, and temple give a glimpse into the ancient side of Guiyang, there’s a modern face to the city as well. You’ll be hard-pressed to find many people under 40 at the above-mentioned locations, as they’re all hanging out in and around the city’s new, shiny shopping malls. Guiyang is also home to quite a few international hotels, and I must admit I rather enjoyed my stay in the Novotel; I scored an awesome suite for under $100. Maybe traveling in 3rd-tier cities isn’t so bad after all… 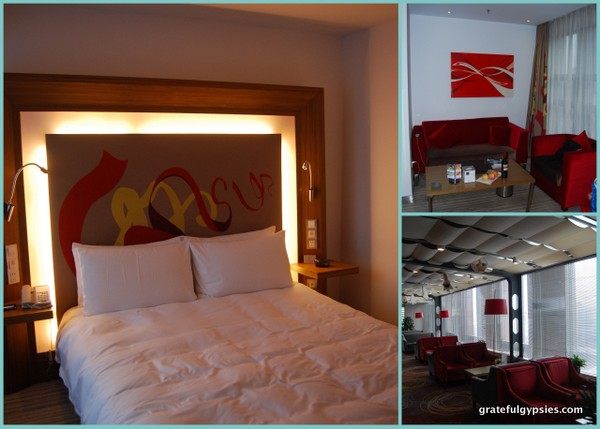 Suite at the Novotel.

For those with more time, there are plenty of places in Guizhou province that you could explore from Guiyang. Trains and buses connect the capital to all corners of the province, making it easy for you to get out and visit caves, waterfalls, and scenic ethnic minority villages. Alternatively, you could easily get a train to other nearby areas such as Yunnan or Guangxi.