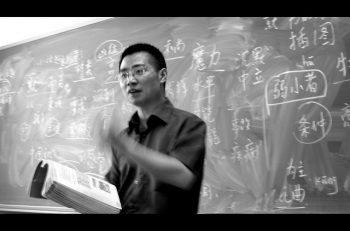 Chinese Teacher by Marco Klapper from Flicker.com is licensed under CC BY 2.0

This绕口令composed of only two consonants: ʽs’ and ʽsh’. As such it provides good practice of these particular sounds and of tones. This 绕口令 has several versions, the shortest one is well known to Chinese learner.

Listen to one of the longest version of 四和十绕口令：

孩子和鞋子 A child and a shoe

This 绕口令 is less famous, but much easier. It requires more vocabulary than the first one, but still suits beginners.

Child is child, shoe is shoe,

The child wears the shoe, is not the shoe that wears the child,

This 绕口令tells a whole story about a boy name Xiaosan.

On March the third, Xiaosan went climbing a mountain.

He climbed the mountain and went down, went down and climbed again.

Perspired all over, wetted three shirts.

On the mountain Xiaosan shouted loud:

“From here to the sky only three point three Chi!”

*Li is a Chinese unit of length equivalent to half a kilometer.

**Chi is a Chinese unit of length equivalent to third meter.

This 绕口令is about another boy, named Nannan. He is not climbing any mountain, but carrying a basket.

Nannan has a basket, in the basket there’s a plate,

On the plate there’s a bowl, the bowl filled with rice.

The plate smash the bowl, the bowl spread the rice over.

This time not little boys involved, but cute cats. This 绕口令 works on the ‘d’ and ‘m’ sounds, and of course on the tones.

The fur of the big cat is short,

The fur of the small cat is long,

Those were only five classic tongue twisters, but be sure the Chinese language has more of that. The four tones and the one syllable words provide diversity 绕口令. Use them for practice and laughter.