For Whom the Bells Toll: BianZhong (编钟) Posted by Stephen on Sep 22, 2011 in Culture

Before the days of zithers, silk-strung bows and reed instruments, making Chinese traditional music was both a simple and grandiose affair. Limited by the tools and resources available back some three millennium ago, it was quite difficult to create instruments with enough precision to replicate specific melodies and notes on an individual scale. Percussion ruled the music world as the earliest societies were forming. The thud of drums and the ringing of bells signified both conquest and inclusion, creating cultures first through tribes and later through empires. Community extended as far as concussions and sound waves would carry.

As a result, the bell became the hallmark sign of a society. Back in less-modern times, it was a signal of a proper town or city. It notified you of the time, when to go to prayer and when an important town event was happening. Throughout history and across most cultures, Bells have served as both beacons and warnings, guiding wayward traveler home and repelling silent invaders. You ask for whom the bell tolls, it tolls for humanity:

“No man is an island, entire of itself; every man is a piece of the continent, a part of the main…any man’s death diminishes me, because I am involved in mankind, and therefore never send to know for whom the bell tolls; it tolls for thee.” –John Donne

It is not surprising then, that as one of the most ancient and continuous cultures, China has developed one of the most elaborate, ornate and melodic type of bells, called bianzhong, that predate almost all non-Chinese bells around the globe. Ling, ling, ling, this ones for you, China.

The Bianzhong  or 编钟 (biān zhōng)  is one of China’s most ancient musical instrument consisting of a large set of bronze bells (usually 20+) that are played melodically by striking them. These sets of chime bells were used as polyphonic musical instruments and some of these bells have been dated at between 2,000 to 3,600 years old. They were hung in a wooden frame and struck with a long wooden mallet. Along with the stone chimes called bianqing, they were an important instrument in China’s ritual and court music going back to ancient times.

Although tuned bells have been implemented in musical performances across a wide range of cultures, bianzhong bells are unique among all other types of cast bells in several respects. Most notably, they have a lens-shape with a enhanced cutaway profile. 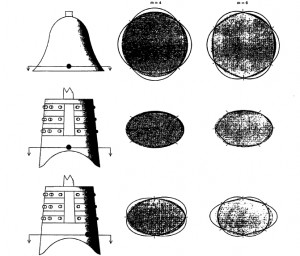 On the exterior surfaces, the  bells feature 36 studs or bosses, symmetrically placed around the body in four groups of nine. This special shape gives zhong bells the remarkable ability to produce two different musical tones, depending on where they are struck. The interval between these notes on each bell is either a major or minor third, equivalent to a distance of four or five notes on a piano, giving each bell a large range of tones and harmonics allowing them to play melodies in both diatonic and pentatonic scales.

A great example of the range of tones produced by these ancient instruments are the bells of Marquis Yi (曾侯乙编钟) , which were unearthed in 1978. These bells are still fully playable after almost 2,500 years and thanks to their twin-tone capability,  can sound a complete 12-tone scale. That’s pretty impressive considering that the Marquis Yi predate the development of the European 12-tone system by some 2000 years! That’s why when people say “classical music” they should be a little more specific, because to be fair, Europe, the Chinese had you beat by a couple millennium. 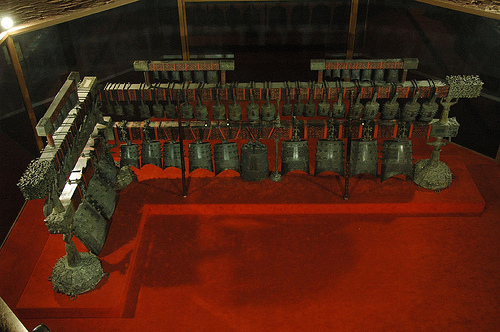