Giant panda breaks out of his Enclosure in front of visitors at Beijing Zoo Posted by Ayana on Dec 27, 2021 in Uncategorized 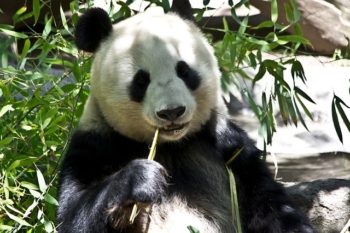 Photo by PublicDomainPictures from Pixabay, CCO

The Chinese word for zoo is composed of two nouns:

Meng Lan is a giant panda (大熊猫 dà xióng māo). He was born in July 2015 at the Chengdu Research Base of Giant Panda Breeding in Sichuan province. He was transferred to the Beijing Zoo at the age of two. Pictures of him and his mate were published online when they first met the public.

Last week Meng Lan went viral again after briefly escaping his enclosure in front of stunned zoo visitors. The curious bear stood on a big red ball to reach a rope hung on the fence (围墙 wéi qiáng). He then pulled himself up and climbed over a two meter railing (围栏 wéi lán). He entered a transition zone and peeked out at the crowed. His calm and calculated movements were caught on video:

A giant panda broke out the enclosure at the Beijing zoo.

The giant panda who crossed over the wall in Beijing zoo is Meng Lan.

The zoo staff quickly rushed to the scene to evacuate the tourists, and lured the animal back into his enclosure with food. The short incident ended with no injuries. Later that day, the zoo published the news on their Weibo account, and called the lovely Meng Lan naughty (调皮 tiáo pí), and added:

Don’t look at us pandas getting fat, we are actually really flexible!