Haba – A Village in the Clouds Posted by sasha on Dec 6, 2015 in Uncategorized

After exploring the ancient town of Lijiang and tackling the epic Tiger Leaping Gorge hike, our journey through northern Yunnan province rolled on with a stop in a small mountainous village. The point of stopping in Haba village (哈巴村 – hǎ bā cūn) was to recuperate a bit from the exhausting hike, and also to visit the White Water Terraces (白水台 – bái shuǐ tái) before heading on to Shangri-la. It seemed like it would be easy enough to get to the terraces and then on to our next destination by public bus, but our plans were thwarted when we realized that there’s often only one bus per day plying that route. Realizing we were stuck in this tiny, quiet mountain village, we decided to make the best of it and enjoy a day of relaxation on an otherwise tiring trip. 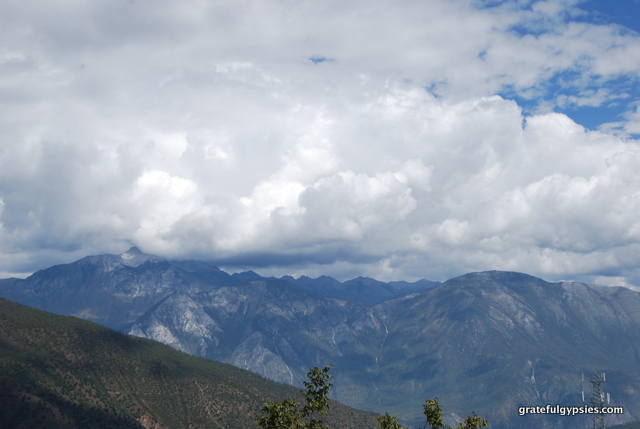 On the drive from Tiger Leaping Gorge, you can really see why this province is called Yunnan (云南 – yún nán), which can literally be described as “south of the clouds.” It truly is stunning scenery, and it makes the painfully slow journey on an old, rickety bus actually a bit enjoyable. 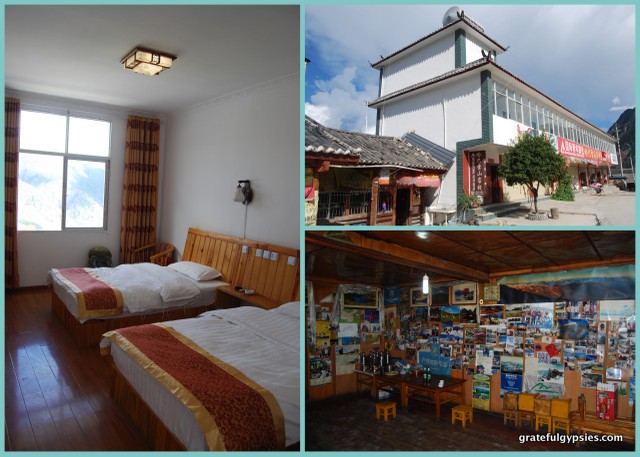 The main reason people visit this tiny village in the mountains of northern Yunnan is to trek up the Haba Snow Mountain (哈巴雪山 – hǎ bā xuě shān). Worn out from Tiger Leaping Gorge and ill-prepared for the serious hike up to the 5,000+ meter summit, this wasn’t an option for us. Thankfully, there’s a nice hostel in the village that was opened to accommodate trekking groups. The couple that runs it are incredibly friendly and more than happy to help facilitate the big hike to the peak or easier trips to surrounding scenic areas. We thoroughly enjoyed a nice home-cooked meal while chatting with them about our experiences living and traveling in China. 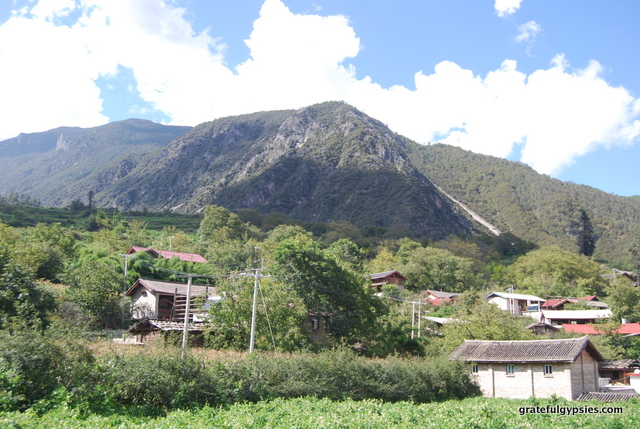 Peace and quiet in the mountains.

With nothing to do and no transportation options, we simply strolled around the village for a few hours. Having grown accustomed to life in China’s mega-cities, it’s always refreshing to spend a little time in the rural countryside. That being said, we’re definitely city folk now, and after a day in the village we were ready to move on. We’re not the only ones who feel that way, either – all across China, young people are fleeing the villages in record numbers to find work in the cities. In Haba, we only saw grandparents, babies, and plenty of chickens. 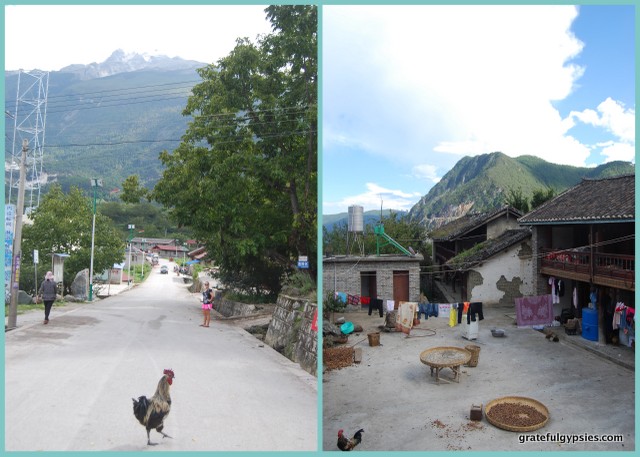 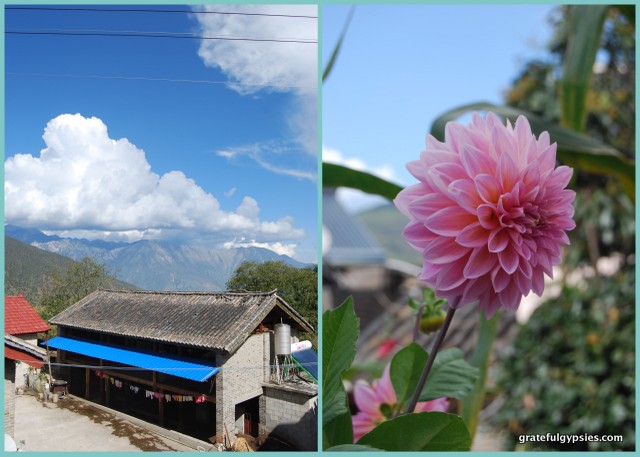 After a much-needed good night’s sleep, we caught the bus out of town headed towards Shangri-la. Still determined to see the terraces, we asked if it was possible for the bus to stop for a while so we could check it out. We were warned by the hostel owners that if we got off the bus, there was a good chance we wouldn’t be able to catch another one that day and would thus need to stay overnight in one of the guesthouses near the terraces. Not wanting to waste another day just to see them, we decided it was better to chock this one up as a loss. 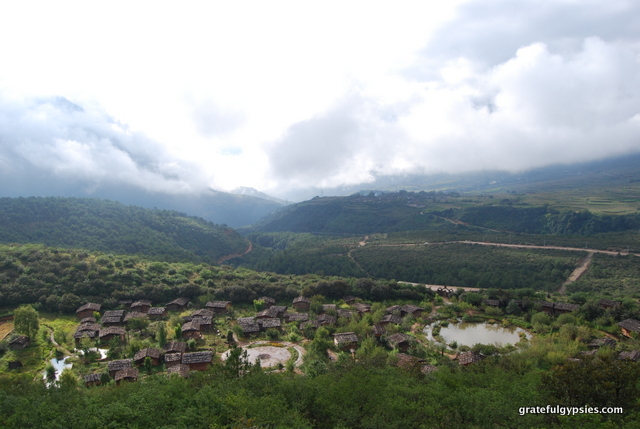 Not sure what this is, but it was interesting.

Once on the road, however, our bus driver told us we could stop for a few minutes to see the terraces. “You don’t need to buy a ticket! It’s a waste of money… You can just see them from the road!” We were skeptical, and for good reason – this is the best view we managed to get of the terraces from the side of the road: 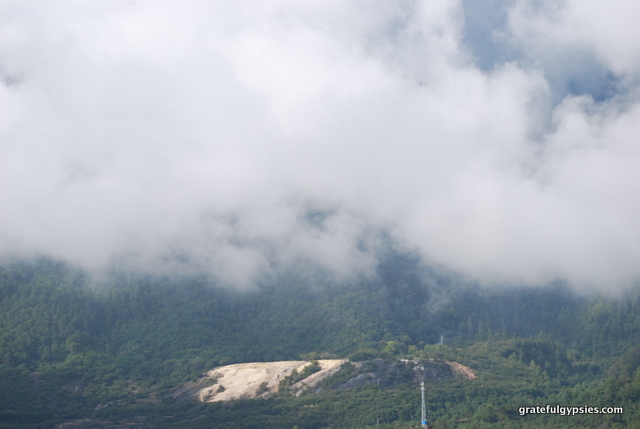 Not exactly a great shot…

Oh well. You win some and you lose some, especially when traveling independently in China without a vehicle. At least we could take some solace in the fact that we’d already been to Huanglong in Sichuan, which is very similar and actually looks a bit better. 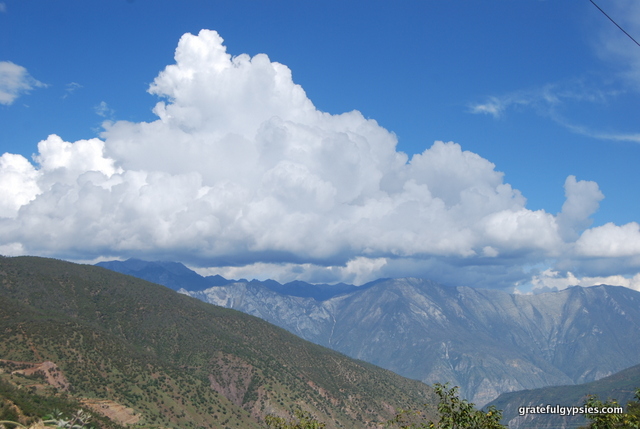 On the road in Yunnan.

Back on the bus, it was a long and winding road up to Shangri-la – the Chinese town that changed its name to match the place described in the 1933 novel Lost Horizons by James Hilton. Is this town in China really the mystical, spiritual paradise that he wrote about? Find out in our next post as we continue exploring fascinating Yunnan.