History and Customs of Tomb Sweeping Day Posted by sasha on Apr 4, 2017 in Culture

Today is the Qing Ming Festival (清明节 – qīng míng jié)) in China. More commonly referred to in English as Tomb Sweeping Day, it’s a day to honor the deceased by visiting and cleaning tombs as well as leaving offerings. As with most Chinese holidays, there’s an interesting story behind the Qing Ming Festival and unique customs associated with it. 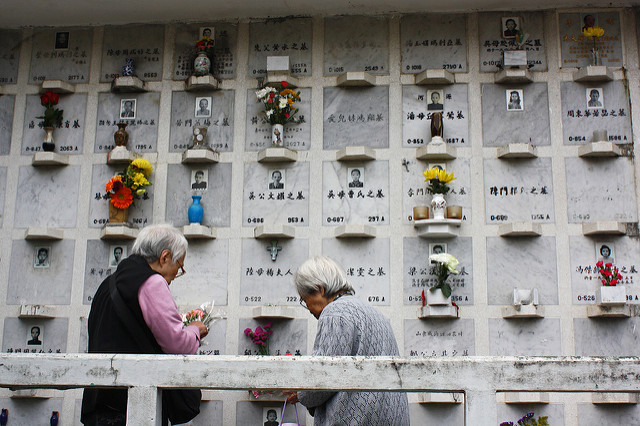 Image by istolethetv from flickr.com.

Thousands of years ago, a prince named Chong’er (重耳 – lit. “double ears”) of the Jin had fled the kingdom and was on the move for 19 years. One particularly hot day, Chong’er found himself tormented by hunger. Luckily for him, one of his loyal followers, Jie Zhitui (介之推) prepared some delicious meat soup for him. Thankful for the sustenance, Chong’er was always curious as to where his friend obtained meat, seeing as how they were in exile and were constantly moving around. To his surprise, Jie had cut off a piece of his own thigh to make the soup; that’s how dedicated he was to serving his Prince. One day, promised Chong’er, he would reward his friend for his selfless deed.

Eventually, Chong’er ascended to the throne as Duke of Jin. At this time, Jie resigned and went to live in the forest with his mother. After returning many favors to people who had helped him in his struggles, the Prince decided it was time to repay Jie. He extended invites to Jie and even went out in the forest in search of him, but to no avail. In a desperate attempt to get Jie out of the forest, the Duke ordered a fire in order to force him out. Unfortunately, this plan didn’t work out so well – Jie and his mother both ended up dying in the fire. Feeling guilty, Chong’er named a mountain after his deceased friend, and he ordered that a period of three days every year be used to remember Jie. During this time, fire was banned (for obvious reasons), and all food was eaten cold. Hence the name, the Cold Food Festival (寒食节 – hán shí jié). The county where Jie died in Shanxi Province is still called Jiexiu (介休), meaning “the place where Jie rests forever.” This practice of remembering the deceased eventually evolved into the Qing Ming Festival.

Although this festival was suppressed by the Communist Party of Mao Zedong back in 1949, it was reinstated as a public holiday in 2008. 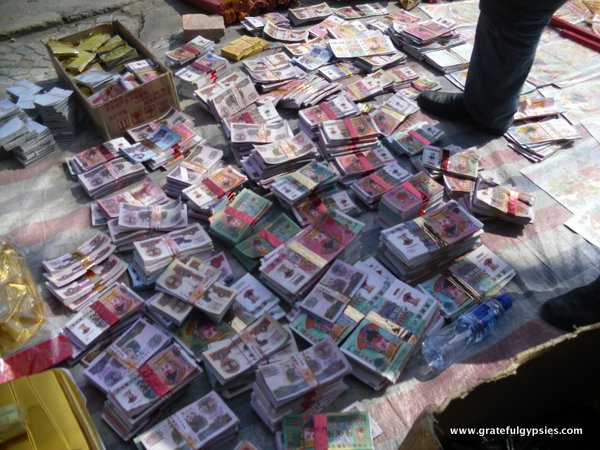 Joss money is burned at tombs.

According to Chinese folklore, the spirits of deceased ancestors continue to look after the family from the great beyond. It is believed that sacrifices of food and paper money will keep the spirits happy, thus blessing the family with good luck. On Qing Ming, Chinese families will visit the grave site of ancestors to do some landscaping and spring cleaning. With the massive increase in China’s population over the past few decades, private grave sites have given way to public cemeteries, and most people are cremated these days. Families will make an offering of bland, dry food at the tomb of their ancestor; this keeps the other ghosts in the area from being tempted to have a taste for themselves. It’s a different story at home, though, as families will cook up the favorite dish of their deceased ancestor and offer it at an altar in their home.

Another tradition is the burning of joss money (金纸 – jīn zhǐ – lit. “gold paper”) at the tomb. With families often burning billions worth of this fake currency, it is believed that this practice allows the deceased to continue living a comfortable existence in the afterlife. However, just as with the fireworks during the Spring Festival, this poses serious fire hazards every year –  so much so that Chinese police have been beefing up the security for this festival in recent years. Burning paper money has actually been illegal in Beijing since 1995, and chrysanthemums (with their flame-like petals) have overtaken the capital for the holiday.

While the fake money looks interesting and may seem like a cool souvenir, don’t make the same cultural faux pas as we did one year. We bought some of it on the street and took it back to our friend’s apartment, and his Chinese roommate was shocked and appalled – you’re not meant to bring the money into the house at all, as you should go directly to the grave to burn it. Whoops.

The tech savvy youth of China have also found more economical and environmentally friendly ways to remember the dead – on the internet. In an example of just how much technology and its byproducts influence our daily life, some stores are even selling paper iPhones and iPads to offer to those on the other side. In addition to being able to enjoy a nice bowl of rice and chicken, great-great-great grandfathers everywhere in China will now also be able to play games and send emoji-filled messages on WeChat.

Does your country have a similar holiday? How do people honor the deceased on this day? Leave a comment and let us know!