A Guide to the Internet in China – Censorship Posted by sasha on May 20, 2014 in Culture

For foreigners visiting or living in China, the internet can be a frustrating and confusing place. Popular websites in the West are blocked in the Middle Kingdom – no Facebook, Twitter, or YouTube allowed. The “Golden Shield Project” (金盾工程 -jīn dùn gōng chéng) is an internet surveillance and censorship program ran by  the government’s Ministry of Public Security (MPS). More commonly referred to as the “Great Firewall of China” ( 防火长城 – fáng huǒ cháng chéng), this is the reason you will get an error message in China if you try to do a search on the Tiananmen Square incident of 1989 or the Dalai Lama. As of 2013, it is estimated that China employs around 2 million “internet police.” To put it into perspective, there are more people policing the internet in China than there are armed forces. 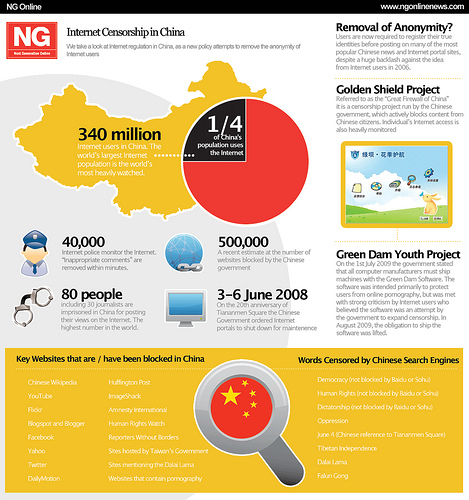 Some info on China and the internet. – Photo from GDS Infographics on Flickr

Let’s take a closer look at the issue of internet censorship in China.

Back when China began economic reforms under Deng Xiaoping, the famed leader had a saying he particularly enjoyed:

“If you open the window for some fresh air, you have to expect some flies to blow in.”

With more economic freedom in China came foreign investment and ideas, many of which conflicted with the ideals of the Communist Party. As such, the government would occasionally have to “swat flies” to protect its interests. This idea serves as the basis for the need to censor the internet in modern times.

The very first e-mail sent from China in 1987 read, “Across the Great Wall we can reach every corner in the world.” Within a few years, steps were already being taken to restrict it. Here’s a key portion of the initial regulations put forth by the MPS just a decade later in ’97:

“Individuals are prohibited from using the Internet to: harm national security; disclose state secrets; or injure the interests of the state or society. Users are prohibited from using the Internet to create, replicate, retrieve, or transmit information that incites resistance to the PRC Constitution, laws, or administrative regulations; promotes the overthrow of the government or socialist system; undermines national unification; distorts the truth, spreads rumors, or destroys social order; or provides sexually suggestive material or encourages gambling, violence, or murder. Users are prohibited from engaging in activities that harm the security of computer information networks and from using networks or changing network resources without prior approval.”

Fast forward another decade, and you’ve got a highly sophisticated system in place where the government manages to maintain a tight grip on what can and can’t be accessed or said on the internet. According to a 2012 report called “Freedom on the Net,” China ranks third – behind Iran and Cuba – on the list of most restrictive countries when it comes to the ‘net.

A common sight when surfing the net in China.

So how exactly does China manage its Great Firewall and censor the internet? A variety of techniques are put in place, such as:

Of course, China’s program of internet censorship is far from transparent, so there’s no way to know the full extent of how they do it. For more details on the various methods used and exactly how they work, check out this great article from How to Geek. For an example of how complicated this issue is, take this into consideration – Google itself is not blocked in China, but the powers that be have managed to block certain search terms. You can load Google just fine, but you’ll receive an error message as soon as you attempt to search for something like “Falun Gong.” Go back again and search for something trivial like “Beijing roast duck,” and you’ll be given thousands of results. While you won’t be specifically told that searching for Falun Gong is blocked, it’s pretty obvious what is really going on.

This hilarious Aussie video gives you a good look at how Chinese internet censorship works. 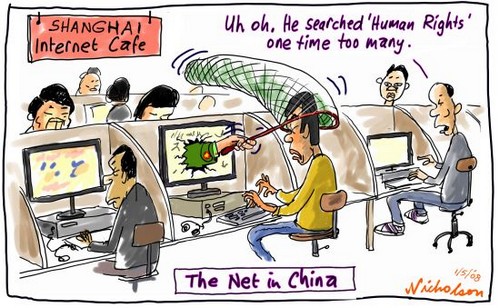 A little bit of humor… – Photo from MIC Gadget on Flickr

With so many millions of internet users and even more web pages out there, what exactly comes under the ax of the Chinese internet censors? You may be surprised to learn that the goal of this program is not simply to control criticism of the government. In fact, plenty of websites and posts that are openly critical of the Chinese government are allowed to stay online. Rather, the main motivation is simply to keep the Communist Party in power. Any posts that could result in political unrest, opposition, or mass organization are promptly removed. In this way, people feel more hopeful and engaged in their government, but at the same time are prevented from organizing en masse. One particular example of this comes to mind from my personal experience in China:

When the Jasmine Revolution and the subsequent Arab Spring took the world by storm back in 2011, China was quite nervous. In countries like Tunisia and Egypt, people were gathering by the thousands to protest their governments, and they were coordinating all of these efforts via social media. Around that time, I was visiting the gallery of some famous artists in the 798 area of Beijing. Luckily, one of the artists was actually there, and I had the chance to chat with him for quite some time. He showed me pictures and videos he had taken from a near-rally in the Wangfujing part of the city just days earlier. In front of the McDonald’s there, a large crowd had gathered, and many people were tossing jasmine flowers. Police were quick to arrive on the scene, the flowers were removed, and the crowd was dispersed. The artist then got online and showed me just how quick the censors work in China – searches for “Wangfujing,” “McDonald’s,” and “jasmine” all retrieved error messages. It is this fear of mass organization and protests that really keeps the Chinese government up at night, and it is the primary target of the huge internet censorship program.

According to the government run Xinhua news agency, the only targets of censorship are, ““superstitious, pornographic, violence-related, gambling, and other harmful information.” Of course, there’s much more to it than that. According to one Harvard study, there are over 18,000 blocked websites in China. Add to that the deleted comments and social media posts, and you can see that censorship has a wide range.

How to Get Around the Great Firewall

There’s really only one good way to beat the censors in China – pay for a good VPN (virtual private network). This service tricks your computer into thinking you are logging in from somewhere else – Los Angeles, Toronto, Paris, or any place that doesn’t have censored internet. They cost between $50-70 for one year, and it’s a worthy investment for those living in China who want to keep using sites like Facebook or YouTube. While there are some free providers, they obviously are not so reliable.

When it comes to avoiding censorship, Chinese netizens have gotten very clever at using nicknames or acronyms to express a point. Just take the case of the “grass mud horse” (泥马 – cǎo ní mǎ). This make-believe animal is huge on the Chinese internet, as it’s another way of saying “f**k your mother,” which would obviously be censored.

We all love the Grass Mud Horse!

Want more on internet censorship in China? Check out this interesting TED talk with Michael Anti: