Music Festivals in China (中国音乐节) Posted by sasha on Aug 11, 2010 in Culture

Back home in 美国, one of my favorite things to do every summer is going to a music festival (音乐节 – yīn yuè jié) with a group of friends.  In fact, between 2003 and 2009, I attended over 30 such events, from Camp Bisco in upstate New York, to Langerado in southern Florida, to Bonnaroo in middle Tennessee, to All Good in the mountains of West Virgina, and just about everywhere in between.  In the summer months, it is not unusual for there to be a dozen different festivals going on around the country on the same weekend.  Some are huge, drawing international (国际 – guó jì) acts, and some are small, focusing mainly on local (当地 – dāng dì) artists.  Indeed, the summer music festival business is a big business in the US, with major festivals bringing in millions of dollars in a few short days.  So, what does this have to do with China? 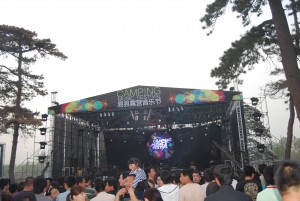 The crowd is ready to rock!

Well, on the other side of the world, the music festival business is picking up here in 中国.  Just a few years ago, Chinese people couldn’t fathom attending a multi-day, outdoor, camping music festival.  Thanks to government suspicions about the evils of rock and roll (摇滚 – yáo gǔn), and the potential unrest and protests that could accompany an outdoor concert (音乐会 – yīn yuè huì), it was nearly impossible to organize such an event.

However, as is the case with just about everything in China these days, things have changed.  Jump forward to the summer of 2010, and you find an abundance of music festivals scattered all across the country.  From the Midi Festival in the capital city of Beijing, to the West Lake Festival in scenic Hangzhou, to the In Music Festival up in the grasslands of Hebei province, music fans have plenty of options these days for weekends full of said evil rock and roll!

So… why the change?  How have music festivals suddenly sprung up all around China?

A trio of out of control rock and roll fans!

To begin with, China has been trying to make the shift from a manufacturing economy to a non-manufacturing economy in many of its biggest cities.  The result – government funding to boost the “creative industry.”  Some of this funding has in recent years gone to staging music festivals, which have started to actually bring in a profit.  This change in attitudes represents a broader change in China – the rock music that once terrified the Communist Party (see the Wiki article on famous rocker 崔健 – Cuī Jiàn) now has local governments excited about making money.  In new China, local governments are more concerned with being able to 从某事中获益 (cóng mǒu shì zhōng huò yì – profit from something) than they are in keeping people away from rock music.

While this is exciting news for music fans, we have to remind ourselves that China is still very much a rookie when it comes to putting on large scale music festivals.  As is often the case here, proper planning and organization are ignored in favor of a “hurry up and do it” approach.  While this has been evident in both of the music festivals I have attended thus far in China, these problems are better explained by someone who has been behind the scenes at many of these events.  For a better review of the growing pains of Chinese music festivals, read this article from Helen Feng, lead singer of the group Pet Conspiracy.

Regardless of these problems, as an avid concert-goer I’m still thrilled about the growth of the music scene in China, and I’m excited to see what the future has in store for music festivals in China. 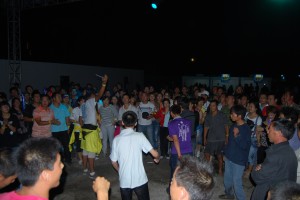 Keep an eye on the blog for a hilarious story about my trip to the Yi Xian Camping Music Festival (易县露营音乐节 – yì xiàn lù yíng yīn yuè jié) as well as a review of the Zhang Bei Grasslands Music Festival (张北草原音乐节 – zhāng běi cǎo yuán yīn yuè jié).  I think you’ll enjoy reading the stories as much as I enjoyed living them!