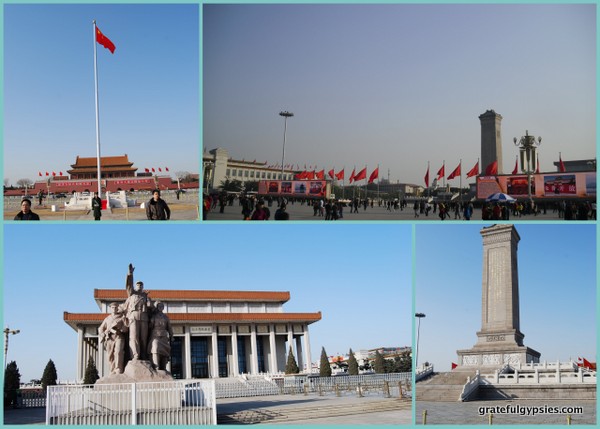 On October 1, 1949, Mao Zedong (毛泽东 – Máo Zé Dōng) declared the founding of a new nation in a ceremony at Beijing’s famous Tiananmen Square (天安门广场 – tiān’ān mén guǎng chǎng). After years of war with the Kuomintang (国民党 – guó mín dǎng) and years of suffering from the invading Japanese, China was finally united once again. The day was made a national holiday just a few months after the new China was born, on December 2, 1949.

Fifty years later, in 1999, National Day was made a Golden Week (黄金周 – huáng jīn zhōu) along with the Spring Festival (春节 -Chūn jié). During the two Golden Weeks, three days of paid holiday are given to workers. In past years, many companies re-arranged the schedule to allow for a full seven days of holiday. This was set up to encourage development of the tourism industry, but the government soon found that this plan hadn’t worked out as they had hoped, and rather had undesirable economic consequences. As a result, most companies just take three days off now. Schools close down for the week as well, and many Chinese people travel, making the Golden Weeks the busiest travel season anywhere on Earth. Airports, train stations, and bus stations are packed full of people who are either heading home for a visit or embarking on a family vacation. Every year on October 1, thousands of Chinese people flock to Beijing to visit Tiananmen Square and the Forbidden City (紫禁城 – zǐ jìn chéng) to celebrate this patriotic day.

Here are a few videos to get you in a nationalistic mood:

A video I made for the blog last year about my visit to Tiananmen on the holiday.

What did Chairman Mao REALLY say on that important day?